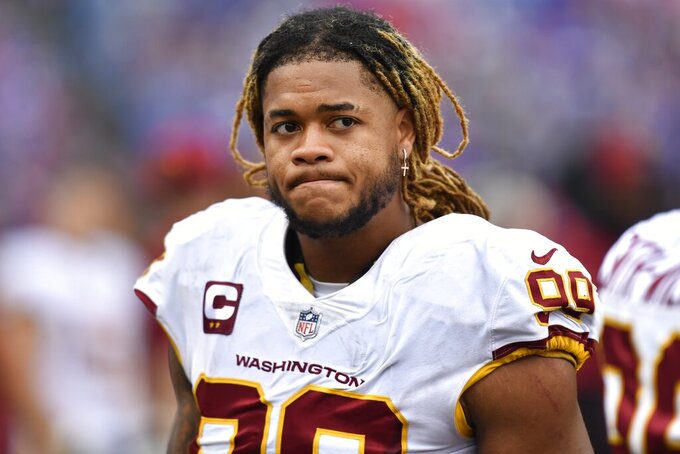 ORCHARD PARK, N.Y. (AP) — Washington coach Ron Rivera's heart began to sink watching Josh Allen and the Bills convert one first down after another on Buffalo's first drive of the second half.

A game that seemed within reach began slowly slipping away as Allen dissected the Football Team's supposedly stout defense during a 93-yard, 17-play drive, which ate up 8:17 of game clock, and ended with Emmanuel Sanders catching a 5-yard touchdown pass to put Buffalo up 33-14.

“It's very disheartening because you make a stop, you feel like you have a little momentum,” Rivera said following a 43-21 loss on Sunday. “And we didn't do that, and that was disappointing.”

The defense was supposed to be Washington's strength following a year in which the unit finished second in the NFL in yards allowed and fourth in fewest points allowed. It instead remains a concern.

“My expectations were for us to play better than we did, to be honest,” said Rivera, who spent the week leading up to the game stressing a need to fix the “little things” on defense.

This was not what was expected from a prized defense, featuring a line comprised of four former first-round picks suddenly having difficulty finding any measure of chemistry.

“As a defense we’ve got to look at ourselves in the mirror and just go back to the drawing board,” defensive end Chase Young said.

The loss to Buffalo was just the latest setback and failed to take the burden off a still-developing offense led by Taylor Heinicke, who made his first career road start.

Buffalo's 43 points and 481 yards were the most allowed since Rivera took over last year.

Though failing to get a sack, Washington generated pressure in the early going. Allen, however, was able to elude the pass rush by making plays on the run. That’s what happened on Buffalo’s first touchdown; four minutes in, Allen broke free of Montez Sweat's grasp and completed a 28-yard pass to Sanders.

Buffalo's scoring drive to open the second half was the turning point, coming after Washington rallied from a 21-0 deficit to cut the lead to 27-14. Starting on their own 7, the Bills went no-huddle and converted three third-down opportunities, including a third-and-5 from Buffalo's 35.

“Third downs. That’s the thing I see,” Rivera said. “We had a couple opportunities on defense to make some things happen and we didn’t get it done and that’s the truth of the matter.”

A top concern for Rivera is the nature of his team’s mistakes, and how they’ve compounded with each passing week.

“I think it all adds up together. Cause I promise you, when we put the tape on, we’re going to see some mistakes when we sit there and say, man, we did that last week, we’re not learning,” Rivera said. “And that’s what my fear is, that when I get a chance to watch that tape is I’m going to feel like we didn’t learn anything the first two weeks.”

It won’t get any easier. Three of Washington's next six games are against three of the best quarterbacks in the league in Patrick Mahomes, Aaron Rodgers and Tom Brady.

“It’s going to be about what we learned from what happened today and whether or not we get up,” Rivera said.