Only four players in 100 years have won six NFL titles 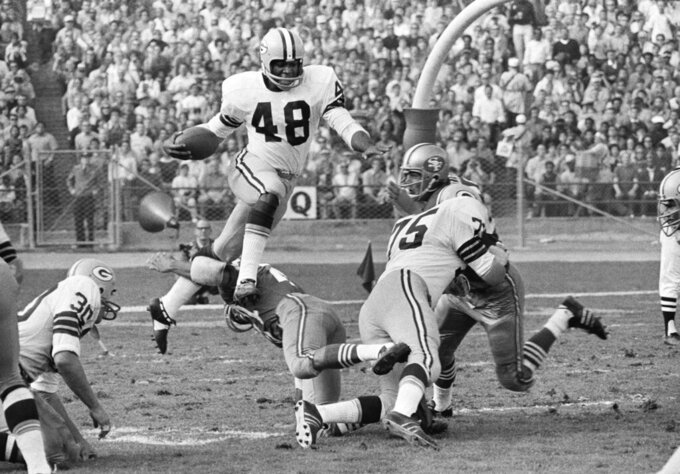 File- This Nov. 2, 1970. file photo shows Green Bay Packer cornerback Ken Ellis (48) leaping as he returns a 49er punt in third quarter NFL action in San Francisco. Packer guard at right is Forrest Gregg (75). "It's going to be a long time, another 100 years, before somebody wins himself six titles," said Herb Adderley, the Hall of Fame cornerback for Vince Lombardi’s great Green Bay Packers teams of the 1960s. Adderley, who turns 80 next month, won five championships in Green Bay, including the first two Super Bowls, plus another with Tom Landry’s Dallas Cowboys in 1971, as did Forrest Gregg, who died last month at age 85. (AP Photo/File)

Tom Brady will soon slip on his sixth Super Bowl ring, and Herb Adderley is the only other player on the planet who can relate to that level of success in the National Football League, which celebrates its 100th season this year.

"It's going to be a long time, another 100 years, before somebody wins himself six titles," suggested Adderley, the Hall of Fame cornerback for Vince Lombardi's great Green Bay Packers teams of the 1960s.

Adderley, who turns 80 next month, won five championships in Green Bay, including the first two Super Bowls, plus another with Tom Landry's Dallas Cowboys in 1971, as did Hall of Fame lineman Forrest Gregg, who died last month at age 85.

Their Green Bay teammate, offensive lineman Fuzzy Thurston, who died in 2014, won all six of his titles with Lombardi and the Packers just as Brady has won each of his half dozen rings in New England with coach Bill Belichick.

"The teams are fundamentally sound and they play with discipline," Adderley said. "And if you get a team that can do that week after week after week and you have good players, you're going to win."

Adderley, who just celebrated his 22-year-old cousin Nasir Adderley's selection in the NFL draft by the Los Angeles Chargers, won his six rings in a 12-year span.

"You look at all the great players that never played on a championship team that went to the Hall of Fame like Gale Sayers and Deacon Jones, one of my classmates when in 1980 when I went in," Adderley said. "There are just so many guys that deserved just one Super Bowl title and then I end up with six, which was half of my career.

"I played 12 years and six times to be an NFL champion, I mean, that's mind blowing."

Thurston won his six titles over a 10-year span, Gregg over a 15-year career and Brady has won his six rings over a 19-year career. He'll be 42 this summer as he enters his 20th season. Gregg retired at 38, Thurston at 34 and Adderley at 33.

Gregg was the first man to play and coach in the Super Bowl. He took the Cincinnati Bengals to their first Super Bowl during the 1981 season when they lost 26-21 to Joe Montana and the 49ers.

Gregg died last month after a long fight with Parkinson's, a disease his neurologist and family believe might have been triggered by countless concussions he sustained while playing football in the 1950s at SMU and in the NFL from 1956-71 during a Hall of Fame career that led Lombardi to call him "the finest football player I ever coached."

"Aw man, I was with him for nine years in Green Bay and then we were teammates in Dallas," Adderley said. "For 10 years we were teammates and we were the best of friends, I'm telling you. They had a grading system where offensive linemen would be graded on pass blocking and run blocking and every week Forrest Gregg was the only one that ended up with a 100 on both run and pass, and if he didn't, it would be 95.

"Other guys on that line in the Hall of Fame, Jim Ringo and Jerry Kramer — and Fuzzy Thurston wasn't a bad lineman, either — but those guys didn't end up with the same grades as Forrest Gregg. That's why Lombardi said he was the best that he'd ever coached."

While he believes it might take another century for the four-man club to expand to five, Adderley concedes that Brady might very well become the first player to win seven NFL championships.

"Oh yes, indeed. He has a shot at it as long as he plays," Adderley said. "As far as I'm concerned, because of the titles that he's won, he's the best quarterback to play. And Bill Belichick gets a lot of credit because of the system that he has. He brings in guys that fit in that system. It doesn't matter who it is, Brady's going to hit the open man."

Adderley, who lives outside Philadelphia, said Lombardi's teams may have won all their titles in a shorter span than Belichick has won his championships in New England but the similarities are striking: both dynasties are marked by sidestepping boneheaded plays and calls that their opponents just can't avoid.

"So, that's the key, if you are fundamentally sound and play with discipline, you're going to be in the running to win. And I think that as long as Brady and Belichick are there, Brady's going to have a chance to get No. 7," Adderley said.

"And as long as he keeps going, our names will always be mentioned: Thurston, Gregg and myself."