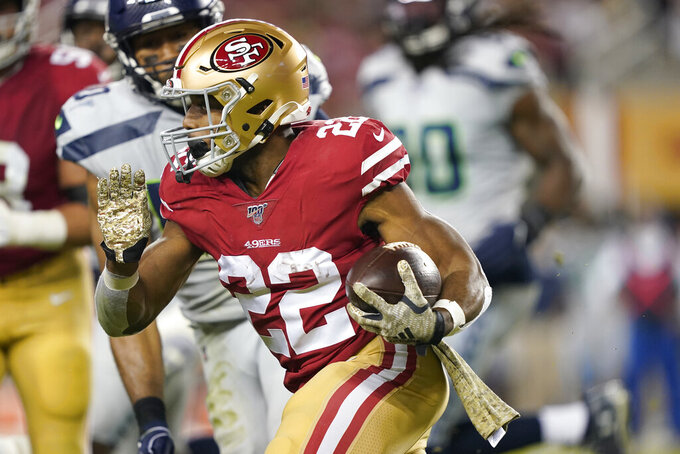 San Francisco 49ers running back Matt Breida (22) runs against the Seattle Seahawks during the first half of an NFL football game in Santa Clara, Calif., Monday, Nov. 11, 2019. (AP Photo/Tony Avelar)

SANTA CLARA, Calif. (AP) — Nobody has been able to do much to stop the San Francisco 49ers this season but apparently opponents are now deciding that taking away the run is the way to go.

Opposing defenses have been loading the box the past few weeks to attack the 49ers’ second-ranked rushing attack and force Jimmy Garoppolo to win the game.

“If I were a D-coordinator, I would do the same thing,” Garoppolo said.

The strategy has yield mixed results because the 49ers (9-1) still won two of their past three games. But they also have shown vulnerabilities future opponents may look to exploit.

“If we want to win games, we have to be able to do a little bit of everything (on offense),” coach Kyle Shanahan said. “Early in the year, we were able to win just running the ball and not throwing it. The last few weeks, we’ve had to throw it.”

They’ve had to throw it partly because George Kittle has been injured. The tight end injured his knee and ankle Oct. 31 against the Cardinals, played through the injury for three quarters but did not finish the game. He practiced Thursday for the first time since suffering the injury.

Without Kittle on the field, opponents can focus on stopping the running game because he is the 49ers’ leading receiver. They don’t have to worry about him catching long passes. He also is an excellent blocker, so it’s tougher for the 49ers to run when he’s out.

“Just the threat of having him on the field,” right tackle Mike McGlinchey said. “It definitely keeps guys guessing, because we can move him so many different places. George has that elite ability to do anything that you ask him to do both in the run and the pass game. Hopefully, these next couple of weeks when George is healthier, we can get back to what we do.”

Kittle’s absence isn’t the only reason the run game has struggled recently.

They also haven’t had starting left tackle Joe Staley, who had surgery to repair a dislocated finger and missed Sunday’s game against the Cardinals. The 49ers expect him to miss several games.

In addition to Staley’s absence, McGlinchey is coming off a knee injury that kept him out four games. He returned Nov. 11 against the Seahawks but doesn’t seem fully recovered yet. He struggled against the Cardinals, and the 49ers rushed for just 34 yards.

“I had a couple of opportunities early in the game that would have opened up the doors for our run game that I personally missed,” McGlinchey said. “We’re going to have to get better. We will be better and it’s going to start this week against Green Bay.”

The 49ers have reasons to feel optimistic. McGlinchey should improve as his knee recovers and Kittle should return soon. The 49ers haven’t ruled out Kittle for Sunday’s game against the Green Bay Packers.

“The healthier you get, the easier it is to run,” Shanahan said.