Osaka returns to spotlight on red carpet at The ESPYS 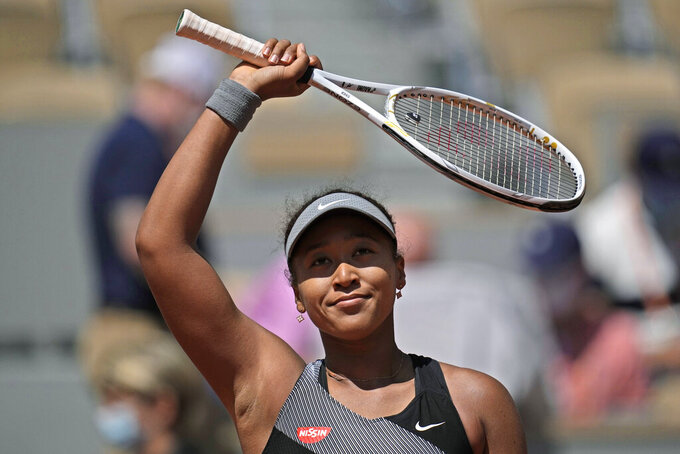 FILE - In this May 30, 2021, file photo, Japan's Naomi Osaka celebrates after defeating Romania's Patricia Maria Tig during a first-round match of the French Ppen tennis tournament at Roland Garros stadium in Paris. Osaka returned to the spotlight for the first time since withdrawing from the French Open in May and skipping Wimbledon, posing on the red carpet at The ESPYS on Saturday night, July 10. (AP Photo/Christophe Ena, File)

Naomi Osaka returned to the spotlight for the first time since withdrawing from the French Open in May and skipping Wimbledon, posing on the red carpet at The ESPYS on Saturday night.

The world’s highest-paid female athlete faced a slew of photographers in New York, with one being heard urging her, “Nice smile” as cameras clicked furiously. Osaka offered a faint closed-mouth smile in response.

Osaka won trophies as the best athlete in women's sports and best women's tennis player at the annual show honoring the year’s top athletes and sports moments. It was moved from Los Angeles to New York for an outdoor, socially distanced show this year because of the coronavirus pandemic.

Tom Brady won best men's athlete and his Tampa Bay Buccaneers were named best team. The quarterback, who turns 44 next month, won his seventh Super Bowl title this year in his first season with the Bucs.

Osaka, who has won four Grand Slam titles, pulled out of the French Open before the second round, saying she has “huge waves of anxiety” before speaking to the media and that she has “suffered long bouts of depression.” She also sat out Wimbledon. She’ll return for the Tokyo Olympics, representing her native Japan.

She high-fived boyfriend-rapper Cordae from YBN Collective before taking the stage.

“I just really want to not say a long speech because I’m a bit nervous,” Osaka said. “This year has been a really, it hasn’t even finished, but it’s been really tough for a lot of us. For me, I just want to say I really love you guys.”

Charlotte Hornets rookie LaMelo Ball won as best breakthrough athlete. The best game award was Gonzaga's 93-90 win over UCLA in the semifinals of the men's NCAA Tournament. DeVonta Smith, who won the Heisman Trophy at Alabama and now plays for the Philadelphia Eagles, won as best men's college athlete.

“They've given so much to this sport, the community, and society as a whole, and their value is undeniable,” she said. “I think we should also use this power together to also celebrate Black women. To all the incredible Black women in my life, on my teams, to Breonna Taylor and all the lives lost, and to those names who I have not yet learned but I hope to share, I stand behind you and I'll continue to follow you and follow your lead and fight for you guys.”

Sprinter Sha'Carri Richardson attended the show in her first public appearance since testing positive for marijuana at the U.S. Olympic track trials and losing her spot on the team for Tokyo.

Actor Anthony Mackie hosted the show from The Rooftop at Pier 17 at the Seaport. He singled out Scripps National Spelling Bee winner Zaila Avant-garde during his monologue. The 14-year-old from Louisiana is a basketball prodigy.

“This kid can do anything,” Mackie said. “She can hit a stepback like Luka Doncic and then spell Luka Doncic right the first time.”

Former WNBA MVP Maya Moore received the Arthur Ashe Courage Award for her work on criminal justice reform. She was honored on the same day that the late tennis champion would have turned 78.

Moore stepped away from her playing career in 2019 to seek justice for Jonathan Irons, who was serving a 50-year prison sentence after being wrongly convicted of burglary and assault. Irons’ conviction was overturned last year and he was freed. The couple later married.

Chris Nikic was honored with the Jimmy V Award for Perseverance. Last year, he became the first person with Down syndrome to finish an Ironman triathlon. Nikic also won best male athlete with a disability.