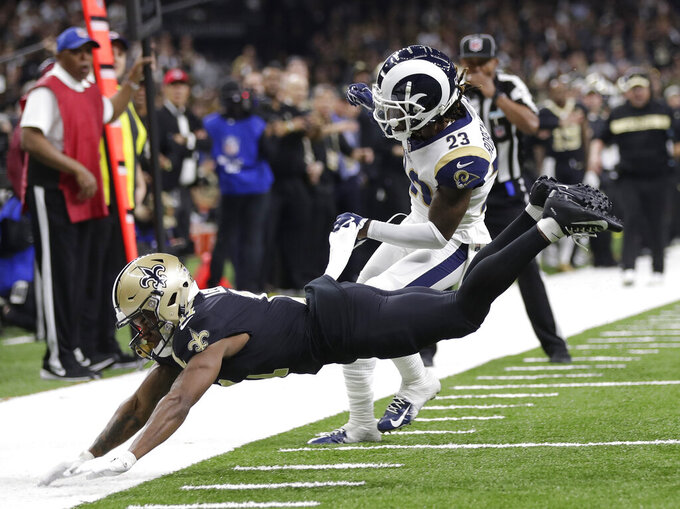 NEW YORK (AP) — There's nothing like two overtime games in the NFL conference championships to keep television viewers glued to their recliners.

The New England Patriots' thrilling victory over the Kansas City Chiefs was seen by 53.92 million viewers on Sunday, the Nielsen company said. That's up 22 percent from the Patriots' victory over Jacksonville last year, and the most watched AFC championship since 2011.

Sunday's afternoon game, where the Los Angeles Rams beat the New Orleans Saints with the help of a referee's bad call, was seen by 44.2 million people, Nielsen said. That's up 4 percent over last year's contest between Philadelphia and Minnesota.

Frigid temperatures throughout most of the country in the middle of a holiday weekend no doubt helped television attendance.

The NFL says ratings for all of its playoff games are up 12 percent over last year's post-season. There's a strong chance Sunday night's game will be the year's second most-watched television event, after the Super Bowl in two weeks.

Fox News Channel was the week's most popular cable network, averaging 2.19 million viewers in prime-time. MSNBC had 2.01 million, Hallmark had 1.36 million, HGTV had 1.23 million and USA had 1.22 million.

ABC's "World News Tonight" topped the evening newscasts with an average of 9.8 million viewers. NBC's "Nightly News" was second with 8.9 million and the "CBS Evening News" had 6.9 million.

ABC is owned by The Walt Disney Co. CBS is owned by CBS Corp. CW is a joint venture of Warner Bros. Entertainment and CBS Corp. Fox is owned by 21st Century Fox. NBC and Telemundo are owned by Comcast Corp. ION Television is owned by ION Media Networks.