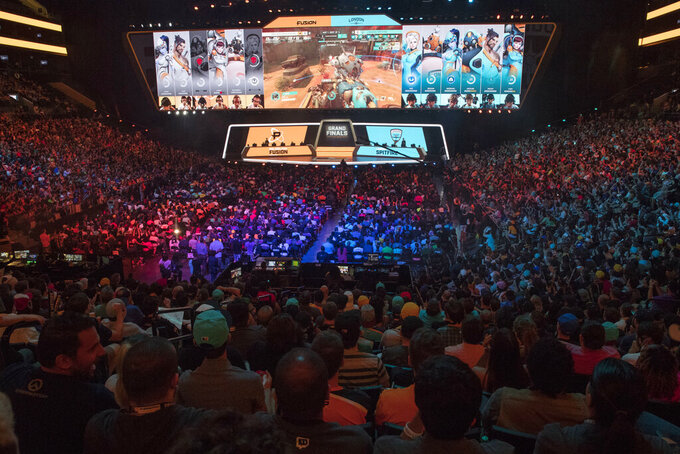 FILE - In this July 28, 2018, file photo, fans watch the competition between the Philadelphia Fusion and the London Spitfire during the Overwatch League Grand Finals, at Barclays Center in the Brooklyn borough of New York. Overwatch League Commissioner Nate Nanzer is leaving the competitive video game circuit to oversee esports competition for Fortnite publisher Epic Games. Nanzer tweeted Friday night, May 24, 2019, he was moving on from Activision Blizzard, the company behind the Overwatch game and league, for a “new opportunity.” He didn’t provide further details or a firm timeline except to say he’ll be leaving “soon.” Epic Games tells ESPN they will hire Nanzer to help turn the world’s most popular video game into a viable esport. (AP Photo/Mary Altaffer, File)

Nanzer tweeted he will be moving on from Activision Blizzard, the company behind the Overwatch game and league, for a "new opportunity." He didn't provide further details or a firm timeline except to say he'll be leaving "soon." Epic Games told ESPN they had agreed to hire Nanzer, who will try to help to turn the world's most popular video game into a sustainable esport.

Nanzer was integral in launching the Overwatch League, a global endeavor with franchises in 20 cities across Asia, North America and Europe that compete in the 6 vs. 6 first-person computer game. Nanzer was working in Blizzard's marketing department when he hatched the idea for the league, and he has been its only commissioner.

The Overwatch League's first season was a smashing success. It filled Brooklyn's Barclays Center for a two-night championship in July, becoming the first live esport broadcast in prime time on ESPN and winning the Esports Live Event of the Year at the Esports Awards in November. The league's initial investors included professional sports owners like the New England Patriots' Robert Kraft, New York Mets' Jeff Wilpon and Los Angeles Rams' Stan Kroenke, and the league had unprecedented success pulling in non-endemic sponsorships to the burgeoning industry.

The league is set to fulfill Nanzer's ultimate vision by launching a global home-and-away format next season. The majority of its regular season matches so far have been held in Southern California.

Nanzer tweeted that he "can't emphasize enough how proud I am of what we've all accomplished together."

Now it seems he'll turn his attention to Fortnite, a cultural sensation that has struggled to convert its popularity into a competitive format. Among the challenges: the battle royale's 100-player, last-man-standing format has been difficult to broadcast, especially as competitors have taken conservative — and thus less entertaining — approaches to competition.

Vlastelica, formerly of Fox Sports, said in a statement he would be "stepping in as Overwatch League commissioner, effective immediately.

"We have the best team in the business working incredibly hard to realize the vision we set out to create years ago," he added, "And I'll be working very closely with our staff, the teams and partners to do just that."