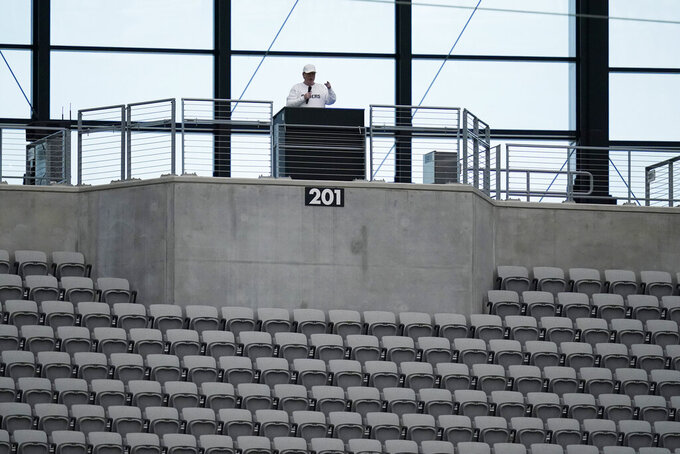 LAS VEGAS (AP) — Mark Davis sat alone on a metal bench at the 35-yard line inside Allegiant Stadium a little more than an hour before the Las Vegas Raiders took the field Friday.

Sitting to his left high over the north end zone in front of a glass wall that reveals the Luxor and Mandalay Bay casinos was the 95-foot torch honoring his late father, Al Davis.

His thoughts during those moments of quiet reflection remained unknown. His thoughts on what the team can accomplish in their new home were made clear once the players were gathered around.

“Welcome to the Death Star, where our opponents' dreams come to die,” Davis said as addressed the players from the base of the torch while being broadcast on three enormous video boards. “My father always said that the greatness of the Raiders is in its future. Well, today that future really starts. This magnificent stadium was built on the backs of thousands of players, coaches, administrators, and fans, who for the past 60 years have proudly worn the Silver and Black. This is our field of dreams. This is our house.

The Raiders then broke in their new home with a scrimmage for which they donned full game uniforms and pads.

“In absence of the preseason, it’s nice the players get a chance to come in here and see what they’ll get to play in this season,” Raiders President Marc Badain said. “We’re very proud of what we have here."

The players went through their typical drills, stations scattered about the field, which currently only has yard lines, hash marks and numbers painted on it, still awaiting the Raiders shield at midfield.

Missing was the baseball diamond the Raiders became accustomed to playing on at the Oakland Coliseum.

"It’s very impressive, the yard-keepers for the field have done a great job,” said fifth-year running back Jalen Richard. “It’s really fast, it’s comfortable. I know a couple of guys thought it was going to be artificial turf, but it turned out to be real grass. We’re real excited for this.”

And it was Nevin Lawson registering the first tackle when he stopped Lynn Bowden Jr. on the opening kickoff, which was duplicated with another right afterward. Rico Gafford promptly took the second one to the house, ignoring whistles blowing the play dead once he darted past his teammates, giving him the first unofficial touchdown inside Allegiant.

“I haven’t seen a stadium that looks like this ever,” Richard said. “It’s blacked out. It looks like a nice limousine or a blacked out H2 Hummer. It just looks nice and big and aggressive. And then you get inside and it’s just beautiful. I definitely won’t take none of this for granted.”

The Raiders were hoping to make as big a splash as the NHL’s Golden Knights did just up Dean Martin Drive at T-Mobile Arena when they made their debut in 2017, but because of the coronavirus pandemic the Raiders will play home games without fans. Their home opener is scheduled for Sept. 21 against the New Orleans Saints on “Monday Night Football.”

Davis has said that if the fans aren’t allowed in the building, he won’t be attending games either. But it's clear what his expectations are, even during such a strange season.