Pac-12 and ACC top conferences in opening round 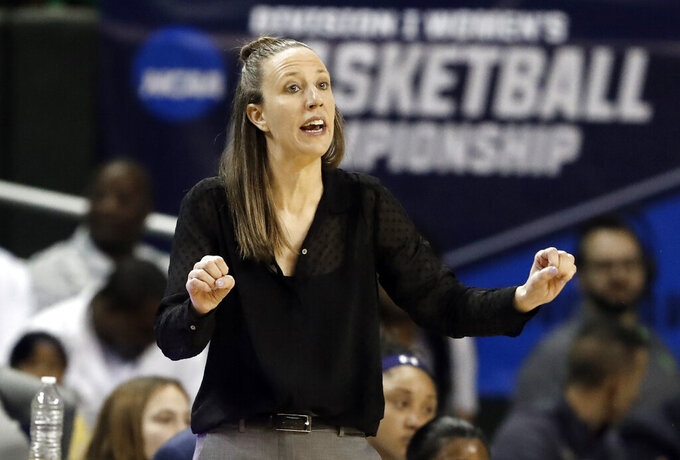 California head coach Lindsay Gottlieb instructs her team in the first half of a first round women's college basketball game in the NCAA Tournament in Waco, Texas, Saturday March 23, 2019.(AP Photo/Tony Gutierrez)

NEW YORK (AP) — The Pac-12 and Atlantic Coast Conference showed conference supremacy in the opening round of the women's NCAA Tournament.

The two power conferences combined to go 13-1 in the first two days. The Pac-12 won all six of its contests, while the ACC went 7-1. The lone loss came in a matchup between the two conferences, with Cal rallying to rout North Carolina.

"I'm not surprised at all that the Pac-12 teams went 6-0. I just have so much respect for the players, teams and coaching in our league," Cal coach Lindsay Gottlieb said. "We knew we'd have a tough first-round game with UNC and that the ACC is really strong, so we tried to take a little extra pride in representing our league and getting the job done."

It's the third time in four years the Pac-12 has gone unbeaten in the opening round of the tournament. The conference is 23-1 in the first round over the past four seasons.

The top two conferences will square off once in the second round, with Arizona State playing at Miami. Seven other teams will advance to the Sweet 16 on Sunday. UConn will be trying to make it's 25th consecutive trip to the regional seminfinals when it hosts Buffalo. One team that won't be moving on is Tennessee, which lost to UCLA on Saturday. The Lady Vols failed to make it out of the first round for the second time in their storied history. The only other time that happened was 2009. They also failed to win 20 games for the first time since 1975-76.

With all the talk of parity this year only three double-digit seeds advanced to the second round. That doesn't mean the first round wasn't exciting. Three games went to OT — equaling the total of the entire tournament last year. A total of 10 games were decided by single digits, double the first round last year.

Seven of the top eight teams advanced fairly easily, with Iowa being the lone one or two seed to struggle in the first round.

Mississippi State and Louisville will try to reach the Sweet 16 on Sunday. The Cardinals hope to have senior point guard Arica Carter back. She practiced and awaits clearance to play after missing the past two games with an injured left knee. Cardinals coach Jeff Walz will also be back on the bench after serving a one-game NCAA suspension.

As Walz took notes and drank a mint chocolate chip milk shake at an adjacent restaurant, the Cardinals rolled with longtime associate head coach Stephanie Norman calling the shots. He was back in the arena soon after the game, though the team did well without him.

"I think if you asked my staff, they would tell me to go back for tomorrow's game," Walz joked. "I'm not even going to ask the players because I'm afraid I know what the answer there will be."

Here are a few other tidbits from the tournament:

FAMILIAR FOES: South Carolina and Florida State will meet for the third time in the past five seasons in the NCAA Tournament — only this one is a couple of rounds earlier.

The Gamecocks defeated the Seminoles in the Elite Eight in 2015 and 2017 in nip-and-tuck games to reach the Final Four, with South Carolina eventually winning the national championship the second time.

On Sunday, the teams face off again at Halton Arena in Charlotte, North Carolina, in the second round with the winner moving on to the Sweet 16. And while the names and faces may have changed over the last couple of seasons, South Carolina coach Dawn Staley said she foresees a similar style in this game.

"Our games were knockdown, drag-outs," Staley said. "They were the type of games where a possession here or there and the results could have been different. I don't think it will be any different on Sunday."

FACING A MENTOR: Missouri coach Robin Pingeton was an NAIA All American while playing for Iowa coach Lisa Bluder at St. Ambrose University in Davenport, Iowa.

"You never have those kind of thoughts, that this kid could someday be a BCS coach at an SEC school, doing so well that they're in the top 32 in the country," Bluder said about coaching against a former player of hers in the postseason. "I mean, you can't think that type of story. That's just unbelievable. And she's done a great job with it."

STAR SIGNAL CALLERS: Maples Pavilion had a pair of talented quarterbacks in the stands for the BYU and Stanford games. Hall of Famer Steve Young, a former BYU star, sat just off the court near the Cougars bench for their win over Auburn. Seattle Seahawks quarterback Russell Wilson, incognito sporting a red Stanford hoodie, was in the stands a couple of rows behind the team's bench rooting for little sister Anna, a reserve guard for the Cardinal. He stood to cheer when she scored a late basket.

AP Sports Writers Gary B. Graves and Janie McCauley contributed to this story.