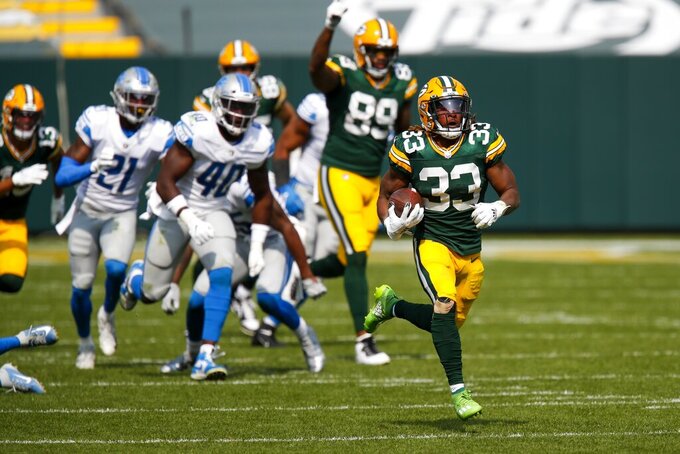 Aaron Jones’ bid for a new contract is paying early dividends for the Green Bay Packers.

Jones had a career-high 168 yards rushing, a team-high 68 yards receiving and three touchdowns in a 42-21 victory over the Detroit Lions on Sunday. He leads the NFL in rushing (234) and yards from scrimmage (312) heading into Monday night’s game between New Orleans and Las Vegas.

This early-season surge comes with the fifth-round pick from UTEP in the final year of his contract.

Jones was part of the 2017 draft class that included Minnesota's Dalvin Cook and New Orleans' Alvin Kamara among other notable running backs. Over the last two weeks, Cook and Kamara both got lucrative extensions.

Kamara got a five-year deal worth $75 million, though that includes a large non-guaranteed payment which effectively limits the team’s obligation to $50 million from 2021 to 2024. Cook received a five-year, $63 million extension.

“I think I’m close to the same caliber player as those guys,” Jones said after Sunday's game. “I don’t know how the cap and all that works, but I do think I’m right there in the range of those guys.”

The Packers (2-0) have plenty of difficult decisions to make regarding their list of key players whose contracts expire at the end of the season.

For now, the Packers will reap the benefits as Jones increases his worth.

“Aaron's versatility really shows up when we split him out as a wide receiver," Packers coach Matt LaFleur said Monday. “He's done some great things. The other thing that I think you can't sleep on (with) Aaron is just his ability as a pass protector, too. There was a blitz late in that game where Aaron (Rodgers) hits MVS (Marquez Valdes-Scantling) down the sidelines for a big explosive gain, and Aaron Jones steps up and hits the blitzing linebacker. I know he's outmatched by a solid 50 pounds right there.

"He's just a really complete back in all three phases.”

Jones led a 259-yard ground attack Sunday that represented the Packers’ largest rushing output since a 262-yard outburst in a 31-3 victory over Denver on Dec. 28, 2003.

Green Bay exited Sunday leading the NFL in points per game (42.5), yards per game (505) and yards per play (7.1). The 1991 Buffalo Bills are the only other team to score at least 85 points and gain at least 1,000 yards through the first two games of a season, according to the Elias Sports Bureau.

“It’s been a lot of fun,” said Jones, whose 16 touchdown runs last season tied Tennessee’s Derrick Henry for the NFL lead. “You come out as an offense, and that’s what you want to do. You want to put points up, you want to score a lot of points, you want to be clicking on all cylinders and just having it run smooth.”

The offense continues to hum right along. The offensive line has dealt with multiple injuries but has allowed only one sack. Rodgers has thrown six touchdown passes. The Packers haven't committed any turnovers.

While the defense got better as the Lions game progressed, it had a stretch where it allowed touchdowns on five straight possessions – the last three series of a season-opening 43-34 victory over the Vikings and the first two possessions against Detroit.

Chandon Sullivan scored on a 7-yard interception return. … Rashan Gary, a 2019 first-round pick from Michigan, has rebounded from a disappointing rookie season. Gary made 1 ½ sacks Sunday and applied the pressure that led to Sullivan’s Pick-6. … Rick Wagner performed well at right tackle against his former team as Billy Turner missed a second straight game due to a knee injury.

Tight end Jace Sternberger didn’t catch a pass and had a couple of drops, though a penalty nullified the play on one of them.

1919 – The last time the Packers scored 40-plus points in each of their first two games.

The Packers monitor the status of those players who got hurt in the second half as they prepare for a Sunday night matchup in New Orleans featuring two of the NFC’s top teams. ___