Packers' Adams delivers again with more help on the way 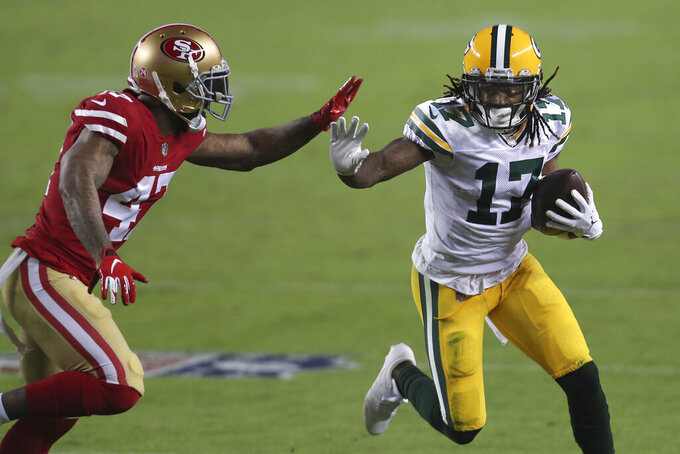 That could change this year.

Adams continued his brilliant season Thursday night by catching 10 passes for 173 yards and a touchdown in a 34-17 victory over the San Francisco 49ers, who were missing many key players due to injury. Adams was asked afterward if he’s the best wideout in the NFL.

Green Bay has relied heavily on Adams, who has an NFL-leading eight touchdown catches despite missing two games with a hamstring injury. Quarterback Aaron Rodgers calls Adams a “joy to play with.”

Perhaps the Packers will need more balance in their passing attack to make a deep postseason run. Green Bay drew criticism from fans this week when it didn’t add a wide receiver before the trade deadline.

But it’s worth noting that Green Bay won those two games Adams missed due to injury, with Allen Lazard having a career-best game at New Orleans and tight end Robert Tonyan scoring three touchdowns against Atlanta.

As the Packers (6-2) reach the midway point of their season, there’s reason to believe Adams might start getting more help from Green Bay’s other receivers.

Marquez Valdes-Scantling dropped a third-down pass early in Thursday’s game, then bounced back by catching a 52-yard touchdown pass and scoring again on a 1-yard reception. Those were his first two touchdowns since a season-opening victory at Minnesota.

Lazard is approaching a return from the core injury that has sidelined him for five games. Lazard had 17 catches for 254 yards and two touchdowns in three games.

Adams has 53 catches for 675 yards in just six games. He’s the first NFL player to have at least 50 catches, 600 yards receiving and eight touchdown receptions over his first six games of his season.

“At this point when the ball’s in the air, I expect to come down with it regardless of the situation (when) the ball’s thrown to me,” Adams said.

The Packers continue to benefit from fast starts. They’ve scored on their opening drive in every game this season. … The Packers didn’t commit a single turnover. They have a league-low three turnovers all season. ... The Packers also show they can bounce back from adversity. They haven’t lost back-to-back games since Matt LaFleur took over as coach last season.

Green Bay did give up a couple of long completions: a 47-yarder to Richie James and a 36-yarder to tight end Ross Dwelley. The big play by Dwelley happened late in the game with Green Bay already ahead 34-3.

Rodgers threw for 305 yards and four touchdowns without an interception. … Elgton Jenkins showcased his versatility. Jenkins started out at left guard but moved to left tackle when the Packers shuffled their line after a knee injury sidelined right tackle Rick Wagner. Jenkins even played center at the end of the game. … Za’Darius Smith had a sack, forced fumble and fumble recovery.

Some bad luck hurt running back Dexter Williams on a night when he could have showcased himself. Williams was activated from the practice squad Thursday and seemed in line for a decent workload with Jamaal Williams (no relation) on the COVID-19 reserve list. But he injured his knee in the first half, didn’t return and ended up with only two carries for 8 yards.

Cornerback Jaire Alexander left in the first half and was being evaluated for a concussion. Linebacker Krys Barnes departed with a calf injury, along with Wagner and Dexter Williams. LaFleur said Williams probably had the most serious injury of the group. The Packers put Barnes and reserve quarterback Jordan Love on the reserve COVID-19 list Friday.

LaFleur said the Packers will be following intensive COVID-19 protocols for a few days as they prepare for their Nov. 15 home game with the Jacksonville Jaguars. “We’re hoping to get everybody through either today or tomorrow just to kind of flush their systems, and then we will reconvene on Monday,” LaFleur said.