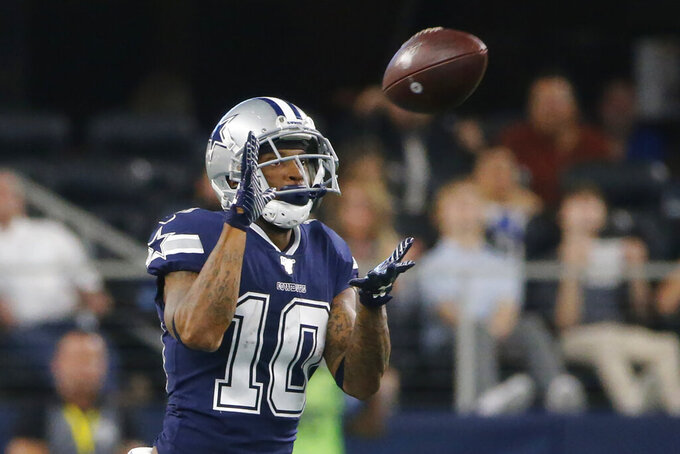 FILE - In this Dec. 15, 2019, file photo, Dallas Cowboys wide receiver Tavon Austin (10) makes a catch before taking it in for a touchdown in the first half an NFL football game against the Los Angeles Rams in Arlington, Texas. The former first-round draft pick is attempting to make a comeback as the Green Bay Packers look to add depth to their receiving corps. The Packers announced Tuesday, Dec. 1, 2020, that they had signed Austin and released wide receiver Darrius Shepherd. (AP Photo/Michael Ainsworth, File)

GREEN BAY, Wis. (AP) — Tavon Austin is attempting to make a comeback with Green Bay as the Packers look to add depth to their receiving group.

The Packers announced Tuesday that they had signed Austin and released wide receiver Darrius Shepherd.

Austin, the No. 8 overall pick in the 2013 draft of the St. Louis Rams, hadn’t played any NFL games this season. T he San Francisco 49ers placed him on injured reserve before this season and later released him as part of an injury settlement.

The 5-foot-8 Austin caught 13 passes for 177 yards and a touchdown last year in his second season with the Dallas Cowboys. Austin spent his first five NFL seasons with the Rams, who drafted him out of West Virginia.

Austin has 215 career catches for 2,006 yards with 15 touchdowns. He also has been a kick returner for much of his NFL career, which could help the Packers if Tyler Ervin has to miss any more time.

Ervin, a running back/kick returner who also lines up at receiver, has missed Green Bay’s past two games with injured ribs.

Green Bay could use some additional players for quarterback Aaron Rodgers. The only Packers wideouts with at least 10 catches this season are Davante Adams (74 catches, 908 yards, 11 TDs), Marquez Valdes-Scantling (25-518-4) and Allen Lazard (19-295-3), though Green Bay has done a nice job of passing the ball to its running backs and tight ends.

The Packers’ biggest offseason addition to the receiving group was Devin Funchess, who opted out before the season.

Shepherd had five catches for 46 yards this season. He fumbled a kickoff return that led to a field goal in a 34-31 overtime loss at Indianapolis on Nov. 22.