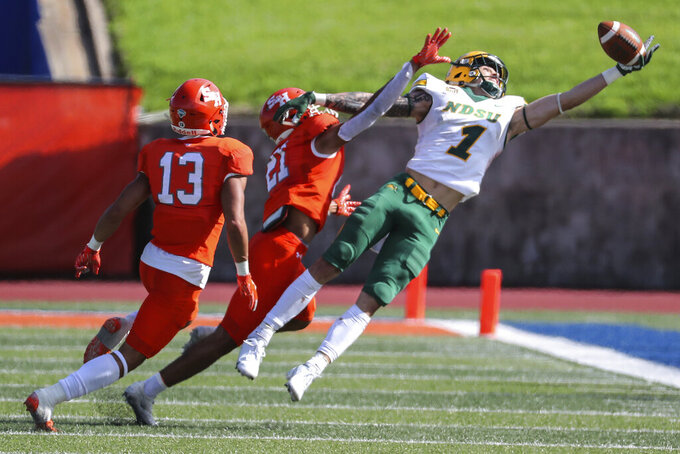 FILE - North Dakota State wide receiver Christian Watson (1) leaps past Sam Houston State defensive backs Isaiah Downes (13) and Kameryn Alexander (21) but cannot come down with the reception during the fourth quarter of a quarterfinal in the NCAA college FCS football playoffs May 2, 2021, in Huntsville, Texas. Watson was selected by the Green Bay Packers in the second round of the NFL draft Friday, April 29. (Brett Coomer/Houston Chronicle via AP, File)

GREEN BAY, Wis. (AP) — Green Bay’s greatest position of concern heading into the draft remains a bit of a question mark even after the Packers selected three candidates to catch passes from reigning MVP Aaron Rodgers.

The Packers added North Dakota State’s Christian Watson in the second round, Nevada’s Romeo Doubs in the fourth and Nebraska’s Samori Toure in the seventh as they attempt to restock at wide receiver after trading All-Pro Davante Adams to the Las Vegas Raiders.

“We’re certainly very much of the belief that competition’s going to bring out the best and the cream’s going to rise,” Packers general manager Brian Gutekunst said Saturday.

“That’s something that we needed to do, and I think we accomplished that.”

The three-time defending NFC North champions still will have less proven talent in their receiving group than just about any other Super Bowl contender. They’ll need one or two of these rookie wideouts to contribute immediately.

“You always feel good right now,” Packers coach Matt LaFleur said. “But the bottom line is you’ve got to get these guys in here and see what they can do. And a lot of it’s going to be, ‘How fast can these guys pick up the offense?’"

Armed with two late first-round picks, the Packers opted against trading up to get one of the top receiving prospects in this class as six wideouts went among the first 18 selections.

The Packers also didn’t follow the lead of the Philadelphia Eagles or Arizona Cardinals by trading a first-round pick to land a veteran receiver. Philadelphia acquired A.J. Brown from the Tennessee Titans and Arizona got Marquise Brown from the Baltimore Ravens.

The Packers took Watson in the second round and UCLA offensive lineman Sean Rhyan in the third round Friday.

Gutekunst didn’t rule out the possibility of adding another veteran receiver to go along with free-agent acquisition Sammy Watkins, who signed with the Packers in mid-April.

“We’ll see what’s out there and if we can help our team,” Gutekunst said. “What we did in the draft wouldn’t prevent us from trying to help our team at wide receiver or anywhere else.”

The Packers needed to find an outside linebacker to complement the duo of Rashan Gary and Preston Smith after the cap-related release of Za’Darius Smith, but they didn’t draft anyone at that position until taking Enagbare with the final pick of the fifth round.

Green Bay picked plenty of players who figure to help out a special teams unit that ranked as the league’s worst last season, according to Football Outsiders efficiency metrics.

Watson had 52 career kickoff returns and scored on two of them during his college career. Doubs scored on a punt return the first time he touched the ball for Nevada. Carpenter filled a variety of special teams roles at Georgia Tech.

“We’ve got to get better there, so I think we’re open to a lot of different things that maybe we wouldn’t have done in the past,” Gutekunst said.

The Packers traditionally have valued offensive linemen who could play multiple positions, but lost two players who fit that profile now that Billy Turner’s with the Denver Broncos and Lucas Patrick has joined the Chicago Bears.

But they found guys who could pick up the slack.

“I feel comfortable playing any position on the offensive line, so I’m just ready to play wherever they put me and go from there,” Tom said.

Watson’s father, Tim Watson, was drafted by the Packers in the sixth round in 1993, but never played for Green Bay during an NFL career that included stints with the Kansas City Chiefs, New York Giants and Philadelphia Eagles.

“I just thought that it would be so surreal for me to play for a team my mom has always been rooting for,” Doubs said. “Jerseys, shirts, hats, the whole nine, man.”

The Packers opened this draft with two second-round picks at No. 53 and No. 59, but traded both for the opportunity to take Watson at No. 34 on Friday.

They went in the other direction Saturday.

The Packers moved down eight spots in the fifth round to get a fourth seventh-round pick at No. 234 that they used on Ford.