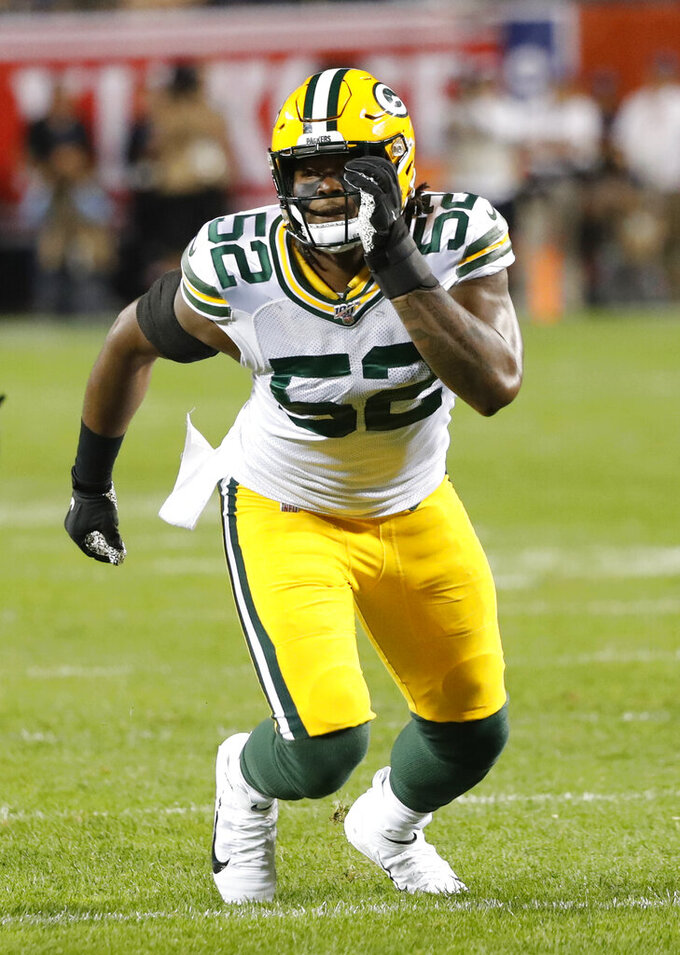 FILE - In this Sept. 5, 2019, file photo, Green Bay Packers linebacker Rashan Gary pursues the play during an NFL football game against the Chicago Bears, in Chicago. The Green Bay Packers’ hopes of developing a championship-caliber defense would get a boost if their two first-round draft picks from last year made major strides in their second seasons. Outside linebacker Rashan Gary couldn’t earn much playing time and safety Darnell Savage Jr. won a starting spot but had to fight through an injury during their rookie seasons. The two former Big Ten players are eager to take a step forward and build on what they learned last year.(AP Photo/Charles Rex Arbogast)

The Green Bay Packers’ hopes of developing a championship-caliber defense would get a boost if their two first-round draft picks from last year make major strides in their second seasons.

Outside linebacker Rashan Gary couldn’t earn much playing time and safety Darnell Savage won a starting spot, then had to fight through an injury in their rookie years. The two former Big Ten players are eager to take a step forward and build on what they learned.

“That experience, with that comes a lot of confidence,” Packers coach Matt LaFleur said.

Gary never really carved out a niche last year while playing behind veteran free agent acquisitions Za’Darius Smith and Preston Smith, who combined for 25 ½ sacks. The former Michigan star made two sacks and was on the field for less than one-quarter of the Packers’ defensive plays.

The pandemic caused Gary to go back to basics in his offseason approach as he tried to play his way into a bigger role.

“I had to go back to kind of the high school workouts, running bleachers, running 110s, running gassers, getting position work in, a lot of footwork,” Gary said.

Packers fans got plenty of opportunities to see just what Gary was doing, as he periodically posted video clips of his workouts on social media.

Gary should have more opportunities this fall. Kyler Fackrell, who had 10 ½ sacks in 2018 and served as the Packers’ third outside linebacker behind the Smiths, departed for the New York Giants as a free agent.

Defensive coordinator Mike Pettine said back in May that Gary could have “a significantly increased role.” Gary’s improvement could help give the Smiths an occasional rest and reduce the likelihood they wear down.

Gary prepared for that by watching the Smiths on film to see what makes them so productive. Gary believes he should benefit from having a better understanding of his role in the defense.

“I feel like I’m at the point where it’s just perfecting every play,” Gary said. “It’s not like learning it and getting it down. I know it, and now it’s about making it effective and doing my assignment every play.”

And that’s what it’s going to come down to for Gary. Packers coaches appreciate the way he attacked the offseason. But he now must show all that work has made him him a better player.

“I’ll tell you one thing you can never question is how Rashan goes after it, his work ethic,” LaFleur said. “He came back in phenomenal shape. I saw a lot of the videos he was posting the entire offseason. He’s always working. More than anything else, just being in Year 2 of the system for him, it’s important that he continues to learn the details and understand exactly what he’s supposed to do on each and every play. I think the only way that’s going to come about is for him to show that in practice.”

While Gary spent much of his rookie season on the sidelines, Savage stepped right into a featured role and became the first safety since Morgan Burnett in 2010 to start for the Packers in his opening week.

Savage was the first Maryland player drafted in the first round since San Diego took Shawne Merriman 12th overall in 2005.

“I think he’s got a bright future,” LaFleur said.

Savage played well last year but missed two games with an ankle injury, and struggled along with the rest of the defense when the Packers allowed 285 yards rushing in an NFC championship game loss to the San Francisco 49ers.

He expects much better results this year.

“I always feel like there’s room to improve, you know what I’m saying?” Savage said. “I’m an extremely confident guy, but at the same time, I always want to get better. I feel like if you’re not doing it to be the best, then what are you doing? I want to improve in everything. I’m not going to stop until I’m on top of the world.”