Packers getting healthier as they begin their playoff drive 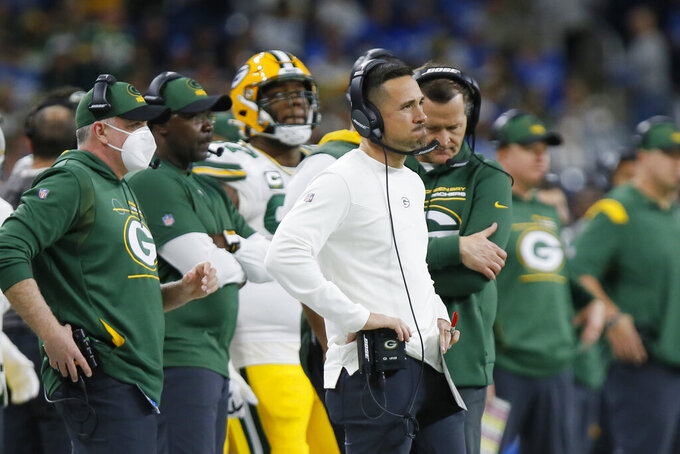 Green Bay Packers head coach Matt LaFleur watches from the sideline during the second half of an NFL football game against the Detroit Lions, Sunday, Jan. 9, 2022, in Detroit. (AP Photo/Duane Burleson)

Aaron Rodgers didn’t seem perturbed after Green Bay closed the regular season with a 37-30 loss at Detroit that snapped a five-game winning streak, but had no bearing on its playoff position.

The reigning league MVP instead was encouraged to be working behind an offensive line that’s getting closer to full strength after 2020 All-Pro left tackle David Bakhtiari and rookie center Josh Myers returned from knee injuries. Bakhtiari was making his season debut. Myers hadn’t played since Oct. 17.

“We talked about momentum, and that was important, but I really wanted to get out there with Dave and Josh,” Rodgers said. “That was my main focus.”

More familiar faces could be back for the postseason. The Packers (13-4) own the NFC’s No. 1 seed and lone first-round playoff bye.

Cornerback Jaire Alexander hasn’t played since injuring his right shoulder Oct. 3 but has returned to practice. So has wide receiver Randall Cobb, who missed the Packers’ last five games with a core injury.

LaFleur preached caution regarding Smith, who posted an Instagram video celebrating his potential return and added the message, “Guess who’s back.” Smith had a combined 26 sacks for the Packers from 2019-20 but hasn’t played since the season opener due to a back injury.

“I want to kind of temper the expectations,” LaFleur said. “Here’s a guy that hasn’t practiced since really that New Orleans game. We’ll get him back out there and see how he looks, see what type of shape he’s in. If he progresses and checks all the boxes, then he’ll be back out on the field.”

The potential return of Alexander and Smith, who each earned second-team honors in last season’s All-Pro balloting, would boost a defense that tailed off late in the regular season.

After the Lions managed their highest point total of the season Sunday while executing a number of trick plays, LaFleur said that “we need all 11 doing their damn job, and if they don’t, stuff like that happens.”

“The thing that’s encouraging is that I believe that all of the mistakes are very correctible,” LaFleur said Monday. “We just had guys going outside their job responsibilities at many different times throughout the course of the game and doing things that ultimately get you beat. That’s exactly what happened.”

The first-team offense looked solid enough while in the game. Rodgers went 14 of 18 for 138 yards with two touchdown passes in the first half. He now has 20 touchdown passes and no interceptions over his last seven games. The Packers also gained 4 ½ yards per carry even without Aaron Jones in the backfield.

The defense must regain its early-season strength for the Packers to get to the Super Bowl. … The Packers also need to start faster. They’ve been outscored 84-51 in the first quarter of games.

WR Allen Lazard had five catches for 75 yards and two touchdowns. He now has five touchdowns over his last five games. … TE Josiah Deguara turned a short completion into a career-long 62-yard touchdown. … WR Davante Adams finished the regular season with 123 catches for 1,553 yards, setting franchise records in both categories. … RB Patrick Taylor capitalized on his second-half playing time by rushing for 53 yards and a touchdown on 11 carries. … DL Dean Lowry made his fifth sack. He’d never had more than three sacks in any of his previous five seasons.

K Mason Crosby missed an extra-point attempt, though he did make a 36-yard field goal. … QB Jordan Love led two straight touchdown drives that briefly put Green Bay ahead in the fourth quarter, but threw interceptions on the Packers’ final two possessions. … Although the pass was deflected at the line of scrimmage, WR Amari Rodgers allowed Love’s first interception to bounce off his arms before C.J. Moore picked it off. … Reserve guard Ben Braden was released Monday.

Jones and LB De’Vondre Campbell sat out Sunday’s game. LaFleur said the moves were precautionary. … WR Marquez Valdes-Scantling left with a back injury.

13 — Although the Packers matched a season high with three turnovers Sunday, they finished the regular season with only 13. They’re the first team in NFL history to have 13 or fewer turnovers in three consecutive seasons.

The Packers wait to learn which team they will host in the divisional playoffs either Jan. 22 or Jan. 23.