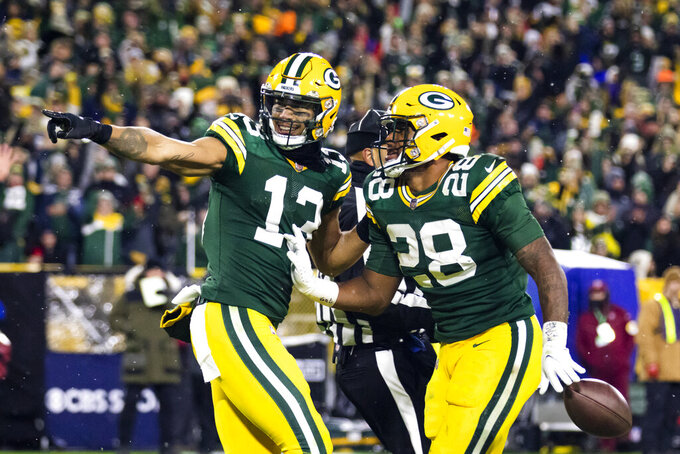 Rodgers missed the Packers' Week 9 loss in Kansas City after testing positive for COVID-19. However, the reigning MVP returned for Sunday's 17-0 victory over the Seattle Seahawks.

The Packers received six of the 12 first-place votes for 378 points in balloting Tuesday by media members who regularly cover the NFL.

The surging Tennessee Titans, who have won six in a row, got the remaining six first-place votes for 375 points to remain in second place.

Another first-place NFC team, the Dallas Cowboys, climbed four places all the way to No. 3 after a blowout win over the Atlanta Falcons. The Cowboys head to Kansas City to face Patrick Mahomes and the Chiefs on Sunday in one of the top matchups of Week 11. The Chiefs rocketed up five spots to round out the top 10 after routing the Las Vegas Raiders 41-14.

“The Packers, now that they have Rodgers back, are my pick this week,” said Charean Williams of Pro Football Talk.

"The Titans, perhaps, have the most impressive resume thus far. The Cowboys were impressive Sunday, but it’s hard to overlook last week’s game against the Broncos. That was a rout against a team that was routed by the Eagles this week.

“It appears the Chiefs are back, but I need to see it again this week against the Cowboys to be sure.”

The Arizona Cardinals, last week's top team, dropped three spots to No. 4 after a 34-10 loss to the Carolina Panthers.

The Buffalo Bills rebounded after losing to the Jacksonville Jaguars by dominating the New York Jets 45-17 and gained two spots to No. 5.

The Tampa Bay Buccaneers slid three places to No. 6 after dropping their second consecutive game, this one to Washington. The Bucs will finish off Week 11 when they host the New York Giants on Monday night.

The Los Angeles Rams also dropped their second in row and fell three spots to No. 7 after losing to the San Francisco 49ers 31-10 on Monday night.

Don't look now, but the New England Patriots are back in the top 10. The Patriots, who climbed four spots to No. 8, have won four in a row and trail the Bills by only half a game in the AFC East. The Patriots, coming off a 45-7 rout of Cleveland, will open Week 11 when they head to Atlanta to take on the Falcons on Thursday.

“The Patriots look like contenders once more, as rookie Mac Jones gets more comfortable each week and (coach) Bill Belichick gets his team playing the kind of intelligent football that helped create a dynasty,” Newsday's Bob Glauber said.

“Jones is no Tom Brady, but he looks good enough to get this team back into the tournament.”

And the Baltimore Ravens fell three places to No. 9 after last week's loss at Miami.