Packers' Jenkins eager for toughest challenge of his career 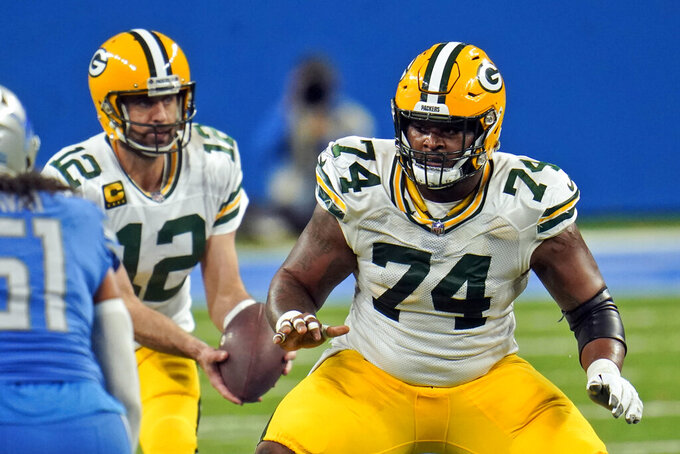 FILE - In this Dec. 13, 2020, file photo, Green Bay Packers offensive guard Elgton Jenkins looks to block during the second half of an NFL football game against the Detroit Lions in Detroit. Jenkins has spent his NFL career demonstrating he can thrive at just about every spot on the offensive line at one time or another. Now the Pro Bowl left guard looks forward to his biggest test yet as he fills in for injured All-Pro selection David Bakhtiari at left tackle and leads a Packers line that likely will include two rookie starters. (AP Photo/Paul Sancya, File)

Green Bay’s Elgton Jenkins has spent his NFL career demonstrating he can thrive at just about every spot on the offensive line.

Now the Pro Bowl left guard looks forward to his biggest test yet as he fills in for injured All-Pro selection David Bakhtiari at left tackle and leads a Packers line that likely will include two rookie starters.

Bakhtiari tore his left anterior cruciate ligament Dec. 31 and will begin this season on the physically unable to perform list, keeping him out for at least six games.

He makes his first NFL start at left tackle Sunday when the Packers face the New Orleans Saints in Jacksonville, Florida. With a defensive line featuring Cameron Jordan and Marcus Davenport, the Saints ranked eighth in the league with 45 sacks last season.

Jenkins is accustomed to moving all over the line.

Last year, he became the first Packer since the 1970 AFL-NFL merger to start at least one game at guard, center and tackle in the same season. The 2019 second-round draft pick from Mississippi State started at every offensive line spot, but right guard during his college career.

“Certainly I do think there’s going to be a learning curve, playing out there at tackle,” Packers coach Matt LaFleur said. “But I think that he’s a guy that just, no matter the situation, he goes in there and attacks it head-on and approaches it with the right mindset, with the right attitude. We expect him to do a very good job.”

Jenkins’ versatility was evident long before he arrived in the NFL. Marcus Johnson, his position coach in college, recalled a time when Mississippi State pass rushers Montez Sweat and Chauncey Rivers were dominating offensive tackles in practice. Sweat is a 2019 first-round draft pick now with Washington. Rivers plays for the Packers.

“You know how those D-linemen are, they get to running their mouths,” Johnson said. “So Elgton was like, ‘Hey, coach, let me go out there.’"

Jenkins, who started all 13 games at center that season, first headed out to right tackle to line up against Sweat. Then he went over to left tackle and matched up against Rivers.

He easily passed both tests.

“He’s what I call a unicorn,” said Johnson, now the running game coordinator and offensive line coach at Missouri. “To me, that’s just an O-lineman that can play every position from tackle to tackle. I knew it as soon as I saw him. He has the feet and athleticism to play out on the edge, yet he still has the mentality, toughness and attitude, in my opinion, what it takes to play on the interior as well.”

Jenkins’ adaptability became evident last season during a victory in San Francisco when injuries left the Packers needing to fill holes at both tackle spots.

That’s the only time Jenkins has played left tackle in the NFL, but he performed well there throughout training camp.

“I’ve been doing it for, what, about five weeks in pads,” Jenkins said. “I feel like I’m pretty well adjusted to it now.”

The Packers’ bigger concerns are elsewhere on the line.

While the Packers haven’t announced their first-team offensive line, they’re expected to start Josh Myers at center and Royce Newman at right guard. The Packers drafted Myers in the second round out of Ohio State and took Myers in the fourth round out of Mississippi this year.

Myers would have the unenviable task of replacing Corey Linsley, the All-Pro center who left for the Los Angeles Chargers via free agency.

“I have not experienced two rookies, especially side by side like that, starting opening day,” LaFleur said. “But those guys, they’ve got a lot of good guys around them, and we’ve got a lot of confidence in their ability to go out there and perform at a high level.’’