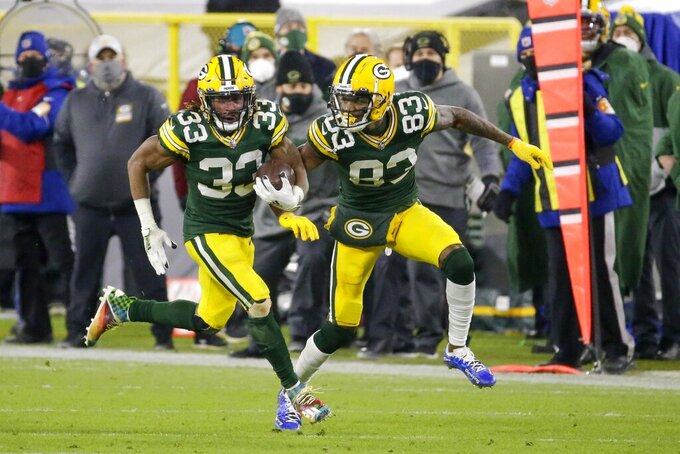 Green Bay Packers' Aaron Jones runs for a 77-yard touchdown during the second half of an NFL football game against the Philadelphia Eagles Sunday, Dec. 6, 2020, in Green Bay, Wis. (AP Photo/Mike Roemer)

It’s the fantasy playoffs in many leagues so every score has the ability to make or break a season. Let’s get it right with these best bets to score in Week 14 of the NFL season.

Montgomery was here last week, and he didn’t let us down, as he scored twice against the Lions in Week 13. He’s back again this week because he’s going up against the next-best matchup for RBs, the Texans. They’ve allowed 17 TDs to RBs this season, behind only the Lions, so Montgomery could continue his recent run of fantasy dominance.

Jones has scored in two of his past three games, and he’ll likely to make it at least three this week against the Lions that just gave up two TDs to David Montgomery last week. The 34.33% TD dependent Jones had his best game of the season in Week 2 against Detroit when he ran for 168 yards and scored twice. He’ll be hard pressed not to have similar success against them this week.

The rich keep getting richer, as Taylor gets his second top 10 RB matchup in a row with the Raiders this week. Taylor put up more than 130 combined yards and a TD against the Texans on Sunday, and now he gets the chance to do something similar against a Las Vegas team that just allowed Jets backup Ty Johnson to run for 104 yards and a TD.

Fantasy owners around the world can rejoice knowing that McCaffrey is scheduled to return to game action this week after missing most of this season. McCaffrey has scored at least once in every game he’s played in this season, and Week 14 shouldn’t be any different. He’ll go up against the Broncos, a team that has been middling against the run but has allowed 10 TDs to RBs. McCaffrey played over 70% of snaps in his last game back from injury, so he should still get enough action to pay off in fantasy.

Only five teams have allowed more TDs to RBs than the Jaguars (13), Henry’s opponent in Week 14. The 33.98% TD dependent Henry touches the ball more than any back in the league and never comes out at the goal line. Only Dalvin Cook has more TDs than Henry who has 12, so the stalwart Titan is a prime candidate to reach the end zone again.

Metcalf has scored only twice in the past five games, but that could change this week when the Seahawks face the Jets, a top-10 matchup for WRs. New York just gave up three TDs through the air to the Raiders, and even though the Seahawks are balancing their attack by running the ball more, they could see the red zone enough to get the 32.95% TD dependent Metcalf his score.

Allen didn't score last week for the first time since Week 7, but he’s in line to get back on track against the Falcons in Week 14. Atlanta is the fourth-best matchup for WRs in football, and the 31.75% TD dependent Allen gets targeted more than any player in the game, so he could find the end zone this week.

Robinson has been the one constant in the Bears offense throughout the season, regardless of whether it is Mitch Trubisky or Nick Foles under center. It really shouldn’t matter this week, as the Bears will face the Texans, who have allowed 16 TDs to WRs this season — the third most in the league.

Cooper has scored in back-to-back games with Andy Dalton under center, and that was against two of the better defenses in the league in the Ravens and Washington. He’ll get his easiest matchup in weeks against the Bengals, in what will be a revenge game for Dalton.

Only three WRs have more receiving TDs (11) than Evans, and he’s gotten his on fewer receptions (48) than any of them. This week, Evans will have the opportunity to face the Vikings’ struggling secondary, a group that has allowed the second-most TDs (19) in the league. The 51.85% TD dependent Evans has scored five TDs in his past five games and could make it six on Sunday.