Packers' key to Super Bowl run: Get the ball to Aaron Jones 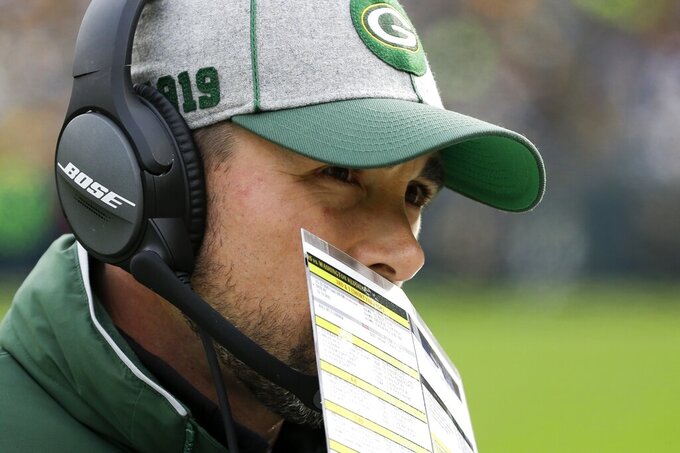 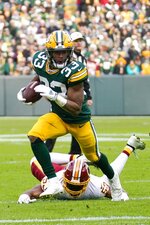 But that now seems as if it's a distant memory.

The offense has been up and down the past five weeks, including two very lackluster efforts on the West Coast in losses against the Los Angeles Chargers and San Francisco 49ers. The Packers (10-3) mustered just enough offense on Sunday to put away the Washington Redskins, 20-15.

“I think we’re just finding different ways to win," Aaron Rodgers said after the the victory. "It might be ugly at times to maybe some folks but we ran the ball today for 180 yards or so and got Aaron Jones going. Different teams have thrown different things at us. I just think we need to be a little more consistent at times. I don’t think we had maybe the same type of flow after the first couple early drives with just the energy. We just missed on a couple things. We’ve got to clean some of that stuff up but I wouldn’t mind winning ugly all the way to the Super Bowl.”

Whatever LaFleur does to fix the offense, the plan better start with six words: “Get the ball to Aaron Jones.”

The third-year running back had 192 yards from scrimmage (134 rushing and 58 receiving) on 22 touches on Sunday, joining wide receiver Don Hutson (1942) as the only players in franchise history to have two games in a season with 190-plus yards from scrimmage on 25 or fewer touches.

“I think the biggest thing with him is how we're trying to utilize him in the pass game,” Packers running backs coach Ben Sirmans said of Jones before the season started. “Now that he's also gotten used to how we run outside zone, he's doing a really good job of pressing it and his knowledge of the game, you can tell he's in his third year. You can see him being more as a vet as opposed to a second-year guy still learning a lot of things. He's still learning, but you get the sense he's more comfortable with just being at this level.”

Green Bay's offense continues to struggle on first and third downs. The Packers were 5 for 13 on third down on Sunday.

“Nobody's saying it's going to be the prettiest every single week," Rodgers said. “The good thing is I think we have a good mindset about it. We watch it. We critique it. We talk about what we want to do differently. But it comes down to execution. When you're 5 for 13 on third and down, we're pretty bad on first down, you're not going to have a dynamic day on offense. It's just the facts.

“So I can't really tell you what the magic recipe is moving forward. But I can tell you it feels really good to be 10-3.”

Adrian Amos. The fifth-year safety had an interception, a sack and seven tackles against Washington. It was the first time a Green Bay defensive back has had a sack and an interception in a game since Micah Hyde in November 2014. Amos has played all but four defensive snaps this season after signing with the Packers for $37 million in March. Amos spent the first four seasons of his career in Chicago and will face his former team on Sunday.

Marquez Valdes-Scantling, The second-year wide receiver's numbers continue to plummet. He had zero targets and played a season-low 10 snaps against Washington. The 6-foot-4 speedster has just two receptions for 11 yards since Week 7. Green Bay has been using more three tight end sets, which has put a squeeze on Valdes-Scantling's reps on game day.

Cornerback Kevin King was inactive with a shoulder injury on Sunday. King was a full participant in Friday's practice but was listed as questionable on the injury report because of his shoulder, which has given him problems. LaFleur said Monday that he found out two hours before game time that King wasn't going to be able to go. King has four interceptions, a sack and a forced fumble this season. He has started every game but the season opener. Tramon Williams, a 13-year veteran, started in King's place, and Josh Jackson also saw extended time in King's absence.

10 — LaFleur became the first head coach in franchise history to win at least 10 games in his first season.

Green Bay ends the season with three divisional games against the Chicago Bears, Minnesota Vikings and Detroit Lions. First up is a rematch with the Bears on Sunday. The Packers defeated the Bears 10-3 in Chicago in the season opener.

“We know what's coming next week,” Rodgers said. “Chicago's 7-6 and playing better of late, obviously. They're still in the mix. So we gotta put together a good performance. And we know what's after that, as well.”