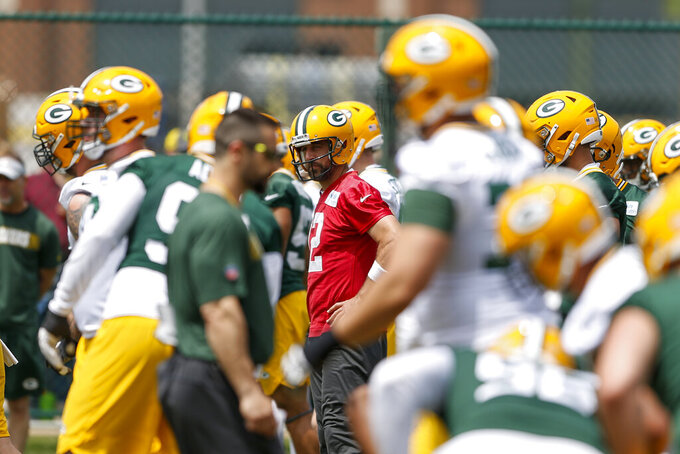 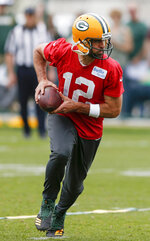 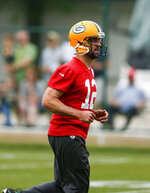 GREEN BAY, Wis. (AP) — For most of his career, Aaron Rodgers has had plenty of good options at receiver.

However, after going from Donald Driver, Greg Jennings, James Jones and Jordy Nelson at the start of his tenure as the Green Bay Packers' starting quarterback to Nelson, Randall Cobb and Davante Adams in recent years, Rodgers has only Adams and uncertainty as he gets ready for his 12th season as the starter.

Last season, following the release of Nelson and Cobb's injury issues, Adams was targeted 169 times by Packers quarterbacks. That was 80 more targets than any other Packers player and only one less than Julio Jones' league-leading total with Atlanta.

Rodgers didn't think that was an unhealthy way to run an offense. Quite the opposite.

"I'd like to throw to Davante more. He's that open," Rodgers said after Tuesday's organized team activities, the eighth of 10 this offseason.

Still, the Packers need more than two-time Pro Bowler Adams to drive the passing game. That was supposed to be tight end Jimmy Graham's role last season. While Graham had a decent season with 55 catches, he scored only two touchdowns.

With Cobb missing seven games and Geronimo Allison missing the final 11 games after a hot start, Rodgers was forced to lean on rookie receivers Marquez Valdes-Scantling and Equanimeous St. Brown. Their inconsistencies mirrored those of the offense as a whole.

Cobb signed with Dallas in the offseason, but Allison and second-year receivers Valdes-Scantling, St. Brown, J'Mon Moore and Jake Kumerow are back and vying for a spot in the lineup opposite Adams.

"I think obviously we need complementary pieces in place," Rodgers said. "I think Marquez has had a fantastic spring and really stepped up as a guy who can be an every-down player, and then I expect a big bounce-back year from Jimmy. He's healthy, he's feeling good. This offense, I think fits him and his body type, but I'm not going to shy away from throwing the ball to Davante."

Graham had one of the big plays of the day, with a fingertip catch of a deep seam pass from Rodgers. The Packers hoped to get those potent plays from Graham last season, when they signed him to a three-year, $30 million contract. Instead, he had zero receptions of more than 25 yards over the final 10 games.

"It's important for both of us," Rodgers said. "Coming off last season, it's important to get him going and feeling comfortable in this offense. I think this offense sets up really good for him. It gives him opportunities to win with his routes and, in situations like that, to win with his athletic ability and speed. He has a tremendous catch radius, which you saw on that play, because the ball was pretty inside. He made a great catch on that."

Notably, the big play came shortly after Graham dropped a pass in a red zone drill. Mistakes happen, first-year coach Matt LaFleur said. Bouncing back from those mistakes is the key.

"I think Jimmy's a pro," LaFleur said. "He's a perfectionist, too, and he gets down on himself when he doesn't do it the right way. And that's one thing I challenged him (on). 'Hey, listen, you're out here learning. Mistakes are going to happen. When they happen, everybody's looking at you. You can't blink.'

"And I just want him to keep a positive outlook, whether he's making a great play or he has to have a learning experience from not doing something quite right. But I'm really excited about him. I think he brings a lot of that veteran presence, especially to that room."

Notes: Coach Matt LaFleur spent most of practice riding around in a golf cart after tearing the Achilles tendon in his left leg last week. "I know I'm supposed to be off it for the next four weeks or so," he said. "Hopefully I'll be back at least in a walking boot by training camp. And then it just depends. Even in the boot prior to the surgery, you can't get around the field as well as you'd like to. But I'm definitely not going to let it creep in and create negative thoughts in my mind." ... Kickers Mason Crosby and Sam Ficken each went 4 of 5 on field goals. ... WR Davante Adams and DT Mike Daniels were among six players not practicing.