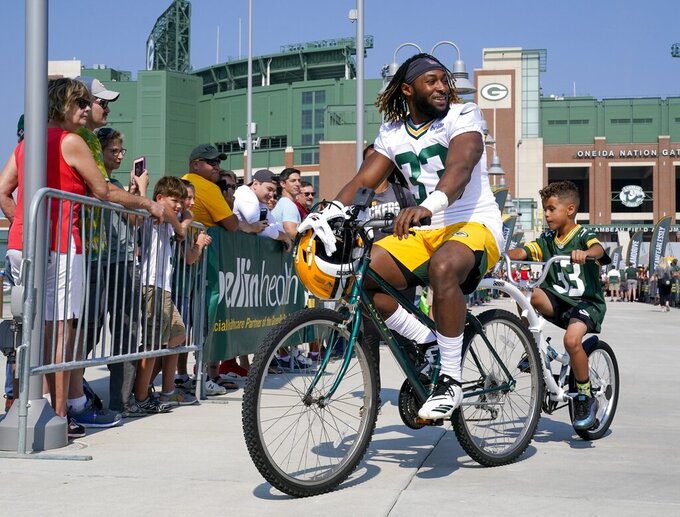 GREEN BAY, Wis. (AP) — All the talk surrounding the Packers this offseason has been about the relationship between new head coach Matt LaFleur and two-time NFL MVP Aaron Rodgers.

Hackett said Monday that he's enjoyed having a front row seat as he, LaFleur, Rodgers and the rest of the offense work to familiarize themselves with each other and the new offensive schemes.

"It's awesome. I really have enjoyed my time in that room with all those guys," he said. "I've tried my hardest to get around to some other rooms, too, and just be in there with everybody, but it's just great because you've got a guy like Matt who's got what his vision is and you've got the experience of Aaron — all the things that he's done — and being able to combine those two things."

Hackett was the first new hire LaFleur made as head coach (his first move was to retain defensive coordinator Mike Pettine). Hackett, who joins the Packers after serving as the Jaguars offensive coordinator the past two seasons, said the urgency on the offensive side has been improving daily as the team prepares for its preseason opener Aug. 8 against the Texans.

"It's exciting and I just think that the more communication, the more dialogue we all have together and get on the same page is so critical," he said. "And up to this point, it's been really good."

The Packers' offense has featured the fullback position a lot so far in camp, bringing plenty of action to Danny Vitale. The fourth-year veteran had only one catch for 2 yards in five games with Green Bay last year but looks to be a more valuable option in 2019.

"I'll tell you, the muscle man has done a nice job, hasn't he?" Hackett said of the 6-foot, 239-pound Vitale. "Yeah, I think when you have a guy like that, I think the good thing about Vitale is he's smart, he loves the game, he fired up."

Joining Vitale in the backfield for the first-team offense has been third-year running back Aaron Jones. The 5-foot-9, 208-pounder had 728 yards and eight touchdowns in 12 games (eight starts) for the Packers last season.

Hackett said he loves Jones' ability to press the outside and agreed that his one-cut ability fits the run scheme.

"I think the biggest surprise with me was watching him when he did make his cut, his ability to get his shoulders squared and downhill," Hackett said.

"He's not the biggest guy, but his ability to really stretch it, one cut, get downhill, you can really see him get low and take on some of those thud tackles from the defense that you're like, 'OK, this guy's not only going to be able to get a couple big ones and break it, but when there isn't anything there, he's going to get a positive gain.' I think that's the thing that's exciting about him right now."

The biggest question mark for the Packers within the skill positions is at wide receiver. Davante Adams is considered to be Rodgers' No. 1 option. Adams caught 111 passes for 1,386 yards and 13 touchdowns in 15 games last season, his fifth in the NFL. But Green Bay is still looking for someone behind Adams as that consistent No. 2 guy.

"I think all the guys have done a nice job in understanding the system and getting better at it and showcasing some of their talents and doing some of the things and we're excited to see who continually rises up," Hackett said of the young receiving group.

The Packers' second-leading returning receiver (outside of tight end Jimmy Graham) is Marquez Valdes-Scantling, who finished last season with 38 receptions for 581 yards and two touchdowns. Adams said Geronimo Allison could be "dangerous" in the new system but the fourth-year wideout is still searching for his breakout season after having his 2018 season cut short last November by a torn adductor muscle he suffered during practice.

"I think the receiver room is fairly wide open," Rodgers said. "We've obviously kept undrafted guys here in the past. Geronimo is one of them. I think there's a lot of opportunities for young guys on that side of the ball and obviously I love to see the progression with those guys. ... Of the remaining 15 or so open spots, zero have been earned so far and a lot can happen."