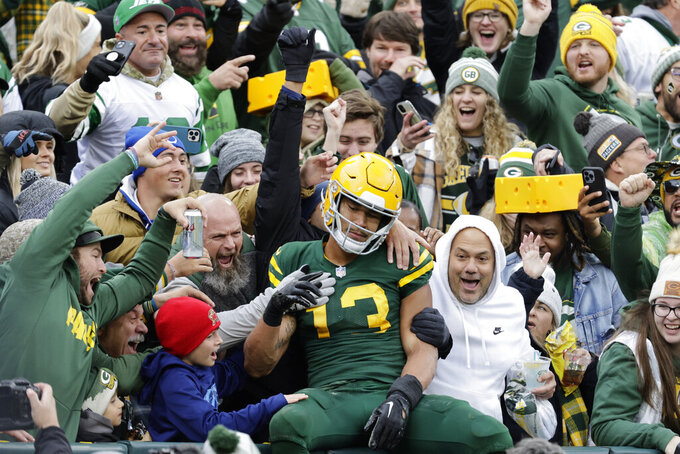 Green Bay Packers wide receiver Allen Lazard celebrates his 25-yard reception for a touchdown with fans during the second half of an NFL football game against the New York Jets, Sunday, Oct. 16, 2022, in Green Bay, Wis. (AP Photo/Mike Roemer)

Lazard had said Thursday he doubted that he’d be available to play against the Bills after injuring his shoulder in a 23-21 loss at Washington. The Packers released an injury report Friday that removed all suspense by declaring Lazard and reserve cornerback Shemar Jean-Charles out.

Watson has missed two straight games and has been a limited practice participant all week. Bakhtiari, who didn’t play at Washington, practiced on a limited basis Wednesday and Friday but missed Thursday’s session.

Gary practiced fully Friday, and Jenkins was a limited participant.

Lazard has 26 catches for 340 yards and four touchdowns to lead Packers receivers in the latter two categories. Gary has a team-high six sacks.

The Packers (3-4) will be attempting to snap a three-game skid when they face the Bills (5-1).