Packers placing OLB Za'Darius Smith on IR due to back issue 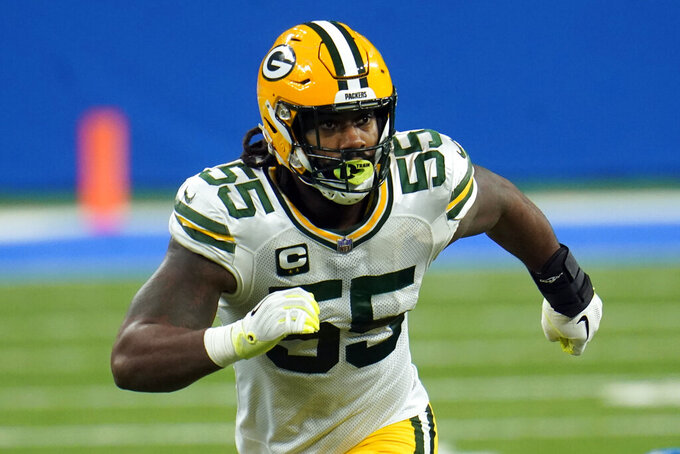 FILE- In this Dec. 13, 2020, file photo, Green Bay Packers outside linebacker Za'Darius Smith (55) plays against the Detroit Lions during the first half of an NFL football game in Detroit. The back issue that bothered Smith throughout the preseason will now force the Packers to play without their Pro Bowl pass rusher for the next few weeks. (AP Photo/Paul Sancya, File)

The back issue that bothered Green Bay outside linebacker Za’Darius Smith throughout the preseason will now force the Packers to play without their Pro Bowl pass rusher for the next few weeks.

Green Bay placed Smith on injured reserve Friday, which means he will miss at least the next three games. The Packers host the Detroit Lions on Monday night.

Smith, who has 26 sacks for the Packers over the last two seasons, practiced just one day during training camp. He played only 18 snaps in the Packers’ 38-3 season-opening loss to the New Orleans Saints.

“It’s a matter of just, do you keep him in a limited role?” Packers coach Matt LaFleur said. “Or do you shut him down for a while, try to get him healthy and then get him up to the snap count that we’d like him to be, just like he’s been in the past, because he’s such an impact player? So, that’s just the route that we thought was best long term.”

Green Bay filled Smith's spot on the roster by signing outside linebacker La'Darius Hamilton off the Tampa Bay Buccaneers' practice squad. Hamilton, who had 17 sacks during his college career at North Texas, spent the 2020 season on the Dallas Cowboys' practice squad.

The loss of Smith is a major blow for a defense that’s trying to bounce back from a dismal performance. The Packers allowed the Saints to score five touchdowns and one field goal in their first seven possessions.

Smith, 29, had 13 ½ sacks for Green Bay in 2019 after spending his first four NFL seasons with the Baltimore Ravens. He followed that by making 12 ½ sacks last season.

The Packers still have a couple of productive outside linebackers in Preston Smith and 2019 first-round draft pick Rashan Gary. Preston Smith, who isn’t related to Za’Darius Smith, had 12 sacks in 2019 but just four last year.

Preston Smith and Za'Darius Smith both joined the Packers before the 2020 season. They're good friends who refer to themselves as the “Smith Bros.”

The Packers' lack of depth at outside linebacker beyond Gary and Preston Smith is a major concern.

Green Bay’s next two outside linebackers are 2020 seventh-round draft pick Jonathan Garvin and Chauncey Rivers, who signed with the Packers this summer after playing one game for the Baltimore Ravens as a rookie last year. Garvin played 27 snaps and Rivers played 11 snaps against New Orleans.