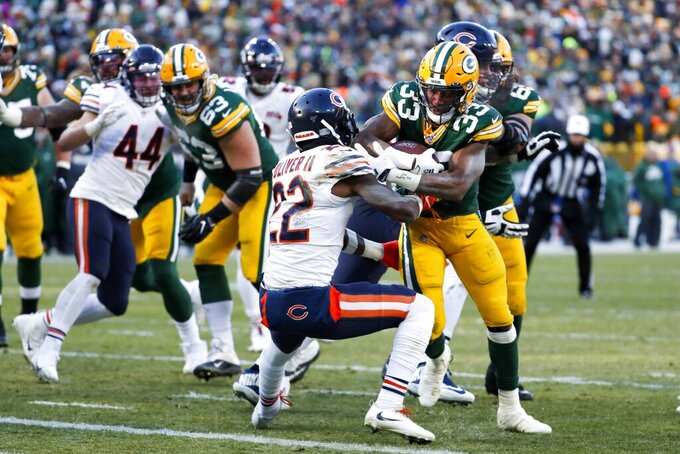 Green Bay Packers' Aaron Jones runs for a touchdown during the second half of an NFL football game against the Chicago Bears Sunday, Dec. 15, 2019, in Green Bay, Wis. (AP Photo/Matt Ludtke) 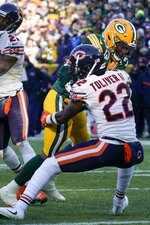 GREEN BAY, Wis. (AP) — Aaron Rodgers and the Green Bay Packers' wait to see if a long-time foe would help them clinch a playoff spot was a whole lot easier than the lateral-filled final play they had to survive to beat the Chicago Bears in the rivals' 200th game.

Leading by eight points with just 1 second remaining, Tramon Williams fell on Jesper Horstead's fumble at the 2-yard line to end Green Bay's 21-13 victory over the Bears Sunday. A few hours later, the Packers were playoff bound, when the Dallas Cowboys beat the Los Angeles Rams.

“I think I blacked out there for a second,” Green Bay coach Matt LaFleur said. “There was so many laterals. I couldn’t tell. I was just hoping that someone was going to make the tackle.”

“I think we have a bunch of guys that are going to fight for every inch out there and that are resilient and that care about each other,” LaFleur said. “This is what I told the team last night, ‘What I love about this team is these guys have embraced their roles.’"

The Packers improved to 19-5 against the Bears with Rodgers as the starting quarterback. Rodgers completed just 16 of 33 passes for a pedestrian 203 yards. The two-time MVP entered the day with a 103.2 career passer rating against the Bears, the highest in league history of quarterbacks with at least 250 passes against Chicago. He had a 78.2 rating on Sunday.

“I love being 11-3,” Rodgers said. “I think the performance was a little up and down but I thought we did some really good things. We just gotta be a little more opportunistic when we have opportunities.”

Mitchell Trubisky completed his first five pass attempts for the Bears (7-7) but for only 18 yards. Chicago's offense opened the game with three straight punts and a turnover on downs. Trubisky finished 28 of 53 for 321 yards, a touchdown and two interceptions, and the Bears had their three-game win streak end.

“Obviously, not the outcome that we wanted,” Chicago coach Matt Nagy said. "We wanted to come here and play four quarters. I thought the way that our guys fought back there at the end to give us a chance to win is good, but obviously the outcome’s not good. Got to pick up the pieces and get better.”

The Packers got on the board first on a 29-yard strike from Rodgers to Davante Adams in the first quarter. Adams beat Buster Skrine off the line for his fourth touchdown in the last four weeks. Adams finished with 103 yards on seven catches.

“I think what Matt did today was great, moving Davante around,” Rodgers said. “We had a number of snaps with him in the slot. And he was playing both Z and X. We're going to have to do that.”

Eddy Piñeiro knocked in a 30-yard field goal late in the first half for the Bears.

The Packers opened the second half with an impressive five-play, 73-yard drive that featured a 34-yard reception to Adams, a season-long 17-yard scamper by Rodgers, and a 21-yard touchdown run by Aaron Jones, his 13th rushing TD of the season.

After another stalled possession by Chicago, Rodgers and Jake Kumerow linked up for a 49-yard gain, Kumerow's longest reception of the season. The play helped set up another score for Jones from 2 yards and the Packers took a commanding 21-3 lead in the third quarter.

Piñeiro added a 27-yard field goal at the start of the fourth and Trubisky found Anthony Miller for a 2-yard score to cut it to 21-13 with 8:09 to go. Miller had nine catches for 118 yards and the score.

“All in all, big picture, we don’t get the win," Nagy said. "We could have played better in all three phases, and I could point to a lot of different things. But I’m going to stay positive with our guys, because I appreciate their fight.”

Kenny Clark had two sacks and Rashan Gary had another for the Packers. Nick Kwiatkoski had the lone sack for Chicago.

Allen Robinson had seven catches for 125 yards for the Bears, who saw their three-game winning streak end.

Bears: Defensive tackle Akiem Hicks left at the start of the fourth period with an injury. Hicks, a Pro Bowl pick last season, was active and played for the first time since dislocating his left elbow against Oakland in London on Oct. 6.

“It just speaks to who he is, his toughness," Nagy said of Hicks. "He aggravated it a few times in the middle of the game and you’re never sure really what happens. But him to fight back like that and be back out there like a warrior with his team, we appreciate that.”

Packers: Williams left in the first quarter to be evaluated for a concussion. The 13-year veteran was cleared to return in the second quarter.

Packers: play at the Vikings next Monday night.