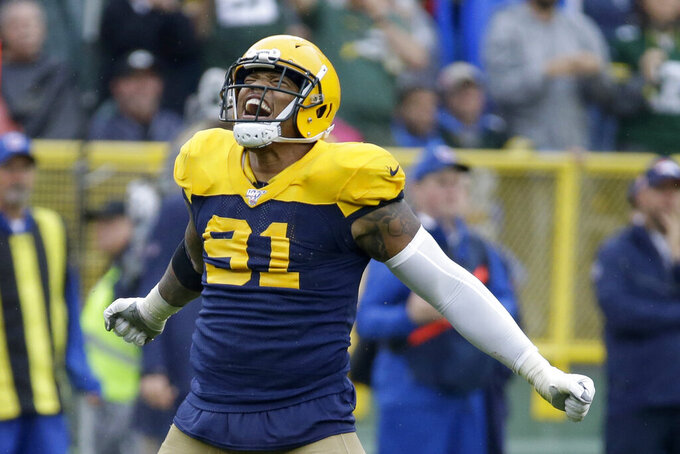 Green Bay Packers outside linebacker Preston Smith celebrates after the Denver Broncos turned over the ball on downs near the end of the second half of an NFL football game Sunday, Sept. 22, 2019, in Green Bay, Wis. (AP Photo/Mike Roemer)

The offensive line kept Rodgers upright, the two-time MVP threw for 235 yards and a touchdown, and Aaron Jones tied a career high by running for two scores to lead the Green Bay Packers to a 27-16 victory over the Denver Broncos on Sunday.

"I took basically one shot," Rodgers said. "I hit the ground one time. So I'm ecstatic. I've been at this for a long time. To go home with my body feeling this good is a credit to the offensive line, for sure."

For the third straight game, Von Miller, Bradley Chubb and the Denver defense failed to record a sack or force a turnover.

While Rodgers stayed clean, Joe Flacco did not. Preston Smith matched a career high with three sacks as Green Bay got to Flacco six times and forced three turnovers to lead the Packers (3-0) to the win despite being dominated in time of possession 35:34 to 24:26.

Flacco was 20 of 29 for 213 yards with an interception and no touchdowns.

Rodgers found Marquez Valdes-Scantling on a 40-yard strike on the opening drive and finished 17 of 29. Jones' touchdown runs came from 7 yards and 1 yard out.

"He has legit 4.3 speed," Rodgers said of Valdes-Scantling, who had a game-high 99 yards receiving on six catches. "I mean, that's just is what it is. Now, he's playing to his kind of speed. He's playing a lot more free. ... We hold ourselves to a high standard. I'm going to hold him to a high standard. I'm very proud of a couple of the adjustments he made today, but we need that continued consistency out of Marquez because he's dynamic with his ability to get down the field."

Following Valdes-Scantling's first score of the season, Flacco and the Broncos' offense spoiled a 60-yard kickoff return by Diontae Spencer, going three-and-out on their first possession.

But Denver tied it at 7 on a 1-yard run by Phillip Lindsay at the start of the second quarter. The score capped a 15-play, 75-yard drive that ate up more than eight minutes.

Mason Crosby put the Packers ahead on a 42-yard field goal with 11:19 to go in the first half. The Broncos answered about 8 minutes later with a field goal of their own.

Green Bay's new-look defense continued its impressive start to the season. After a sack by Za'Darius Smith, who finished the day with two, fellow newcomer Smith followed with one of his three sacks. Flacco coughed up the ball and Rashan Gary recovered it at the Broncos 5. Jones ran it in from the 7 and Green Bay took a 17-10 lead into the locker room.

Packers cornerback Jaire Alexander opened the third quarter by recording his first career forced fumble and fumble recovery after stripping Noah Fant on a 4-yard completion. Green Bay took advantage as Rodgers hit fullback Danny Vitale for a 27-yard gain that put the ball on the 1 before Jones ran it in for his second touchdown to make it 24-10. It was Jones' second career multi-touchdown game. The third-year running back also had two rushing touchdowns last season against the Dolphins.

Lindsay cut it to 24-16 on a 1-yard run with about 6 minutes left in the third. Brandon McManus missed the extra point.

Crosby added a 41-yard field goal in the fourth quarter to make it a two-possession game.

"Yeah, that's three games in a row. That's no good, obviously," said first-year Broncos coach Vic Fangio, who went 2-5 against Rodgers-led offenses as Bears defensive coordinator from 2015-18. "And it is the circumstances of the game, to a degree. This game in some ways was similar to our first two. Until we can stop people more decisively and score more points, teams are going to be content playing these types of games."

Broncos: DE Derek Wolfe was carted off the field in the second quarter with a right ankle injury. He did not return. Fangio had no update after the game.

Rodgers needs one touchdown throw to pass Fran Tarkenton for the ninth most in NFL history. Rodgers and Tarkenton are tied with 342 career touchdowns. Eli Manning is eighth with 362.

"I feel on this defense we have the good swagger about ourselves," Gary said. "We trust one another that when we look to the left and the right of us that everybody's going to do what they need to do to come out with the win. That's the type of mindset the defense has got."