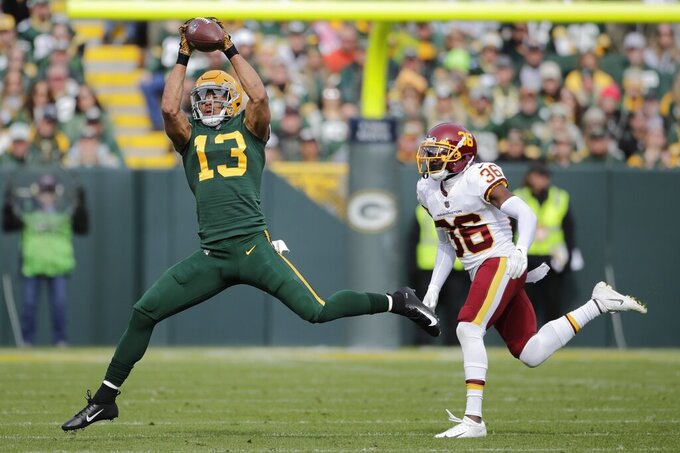 GREEN BAY, Wis. (AP) — The Green Bay Packers have demonstrated all season they can win games when they’re not even close to full strength.

Now they’re about to face a challenge unlike anything they’ve encountered all year.

The Packers (6-1) will put their six-game winning streak at stake Thursday night at the unbeaten Arizona Cardinals (7-0). And they could be making that trip without 2020 All-Pro receiver Davante Adams or defensive coordinator Joe Barry.

They could only be available for Thursday night’s game if they’re fully vaccinated and test negative for the virus on consecutive days. Monday’s news also leaves open the possibility the Packers could have more virus-related absences as they play their toughest opponent thus far.

“You have to take it in stride and just approach it with positive mind and a positive attitude, and just make the best of whatever situation you encounter,” LaFleur said.

The Packers have grown accustomed to playing without some of their biggest names, though the potential loss of Adams looms particularly large.

Yet the Packers keep winning, thanks in part to a defense that has come a long way since Green Bay’s 38-3 season-opening loss to the New Orleans Saints.

The Packers are allowing just 18 points per game during this winning streak.

“We’re just getting more comfortable with each other,” linebacker De’Vondre Campbell said after Sunday’s game. “That’s huge when you go out there on defense. Defense isn’t like offense. We’re always reacting. Us being on the same page and being able to communicate and figure things out, that’s definitely been a huge part of us taking a step forward.

“We’re missing a lot of key players. As we continue to get people back, we’re going to keep striving for excellence and continue to try to get better and better every week.”

Green Bay’s pass rush produced four sacks. The Packers have allowed a total of 24 points over their last two games.

Aaron Rodgers spread the ball around more and threw touchdown passes to Allen Lazard and Robert Tonyan as well as Adams. The Packers could need big games from Lazard and Tonyan if Adams isn’t available Thursday.

Rodgers has thrown 15 touchdown passes with only one interception during this winning streak.

Rodgers was sacked three times and faced more pressure than usual against a Washington defensive line featuring four former first-round picks. The Packers rushed for just 57 yards, though they didn’t attempt to establish much of a rushing attack and focused on throwing against a Washington secondary missing injured CB William Jackson III. Aaron Jones and A.J. Dillon combined for only nine carries.

As well as the defense played, it did allow Washington QB Taylor Heinicke to rush for 95 yards.

OLB Rashan Gary had two sacks, forced a fumble and applied consistent pressure, while Campbell had 13 tackles and forced two fumbles. DE Dean Lowry now has at least a half- sack in three straight games.

Dillon had two fumbles, though the Packers recovered one of them.

CB Rasul Douglas hurt a shoulder but returned to the game. … LaFleur expressed hope Monday that Valdes-Scantling might be able to play Thursday. Valdes-Scantling has missed four games with a hamstring injury.

29 – total number of penalties by the Packers this year. That’s their lowest total through the first seven games of a season since 1974.

The Packers hope they don’t have to put anyone else on the reserve/COVID-19 list before Thursday’s game at Arizona.