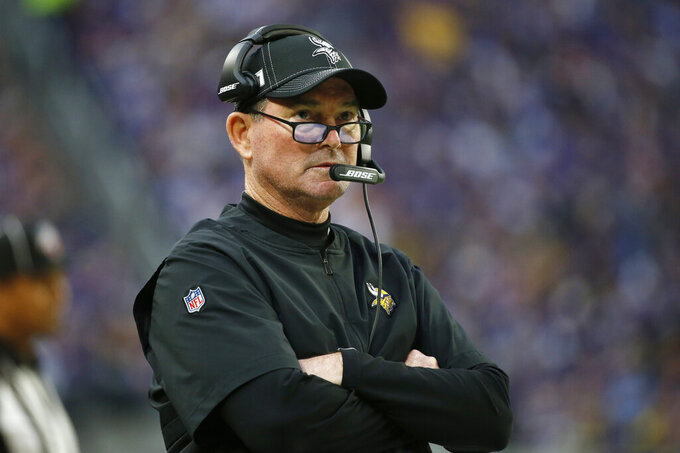 Minnesota Vikings head coach Mike Zimmer watches from the sideline during the first half of an NFL football game against the Detroit Lions, Sunday, Dec. 8, 2019, in Minneapolis. (AP Photo/Bruce Kluckhohn)

As well as a strong respect for each other's abilities.

“Either me or him have to get out of this division at some point,” Zimmer said on Thursday.

“It’s too hard to go against him. He’s too damn good,” Zimmer said.

Including a 2013 game at Cincinnati, when Zimmer was the Bengals’ defensive coordinator, Monday night’s game in Minneapolis will be Rodgers’ 12th game against a Zimmer-coached defense. Rodgers is 5-5-1 in those games.

“Tell him to retire” was Rodgers’ retort at his locker following Thursday’s practice.

Zimmer’s defense, as usual, will present a big challenge for Rodgers and Co. Minnesota enters this week’s games ranked sixth with 18.5 points allowed per game. At home, where the Vikings are 6-0 this season and 3-0 against Green Bay since U.S. Bank Stadium opened in 2016, they’re allowing just 14.2 points per game.

It will be a familiar group across from Rodgers. Defensive ends Danielle Hunter and Everson Griffen will be looking to sack Rodgers, linebackers Eric Kendricks and Anthony Barr will be making plays all over the field, and safety Harrison Smith will be roaming the secondary. The cornerbacks will be different, though. While Xavier Rhodes and Trae Waynes are longtime starters, Zimmer has been rotating Mackensie Alexander, Mike Hughes and Holton Hill into the action. Regardless, Zimmer’s defense remains as stingy as ever.

“He’s just a tactician on defense,” Rodgers said. “He’s very smart with the self-scout, and he’s going to throw a number of different things at you. They’re as good with their disguise and their togetherness as the best Chicago Bears defenses that I faced over my time when they were rolling with Brian Urlacher and Lance Briggs and Peanut Tillman and Tim Jennings and all the guys they had up front rushing.

"Just the way they would play together from the front to the back end is the same way, the continuity they have, the ability to disguise, the trust they have in each other. They can sit in a disguise until you make some sort of adjustment or check, and then be able to get back to where they want to get to, and make it really difficult on offenses.”

In some ways, Rodgers has had as many answers as any quarterback against Zimmer. In 10 starts against the Zimmer-led Vikings, Rodgers has thrown 17 touchdowns vs. two interceptions with a 99.8 passer rating. Wins have been harder to come by. Green Bay’s 21-16 victory at Lambeau Field in Week 2 gave Rodgers a 5-4-1 mark. It marked the fifth consecutive start against Zimmer in which he did not throw an interception, but he has only one 300-yard game.

“Offensively, they look very similar to the first time we played,” Zimmer said. “They give you maybe a few more personnel groups or things like that. I think they’re running the ball really well. I think Aaron Jones has helped. You know, Rodgers, I have the utmost respect for him. He’s a terrific player. He’s extremely smart. He can make all the throws. His scrambling ability is … everything that he does is really difficult. Either me or him have to get out of this division at some point.”