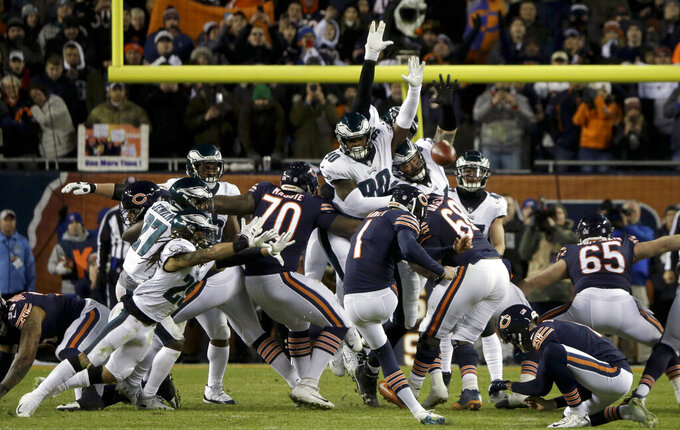 FILE- In this Jan. 6, 2019, file photo, Chicago Bears kicker Cody Parkey (1) boots a field goal-attempt during the second half of an NFL wild-card playoff football game against the Philadelphia Eagles in Chicago. Eagles' Treyvon Hester (90) tipped Parkey's attempt just enough to send the ball bouncing off the upright and crossbar, securing a 16-15 win at Chicago in the wild-card round. The Green Bay Packers have signed defensive lineman Treyvon Hester, who is set to play for his fourth different NFL team in as many seasons.(AP Photo/David Banks, File)

GREEN BAY, Wis. (AP) — The Green Bay Packers have signed defensive lineman Treyvon Hester, who is set to play for his fourth NFL team in as many seasons.

He is best known for tipping Cody Parkey's 43-yard field-goal attempt in the closing seconds to preserve the Eagles' 16-15 victory over the Chicago Bears during a wild-card playoff game in the 2018 season. Parkeý's kick bounced off the upright and crossbar.

Green Bay added just one defensive lineman in last week’s draft, as it took Miami end Jonathan Garvin in the seventh round. The Packers ranked 23rd in the NFL in run defense last year and allowed 285 yards rushing in a 37-20 NFC championship game loss to the San Francisco 49ers.