Packers without Rodgers as they visit Mahomes, Chiefs 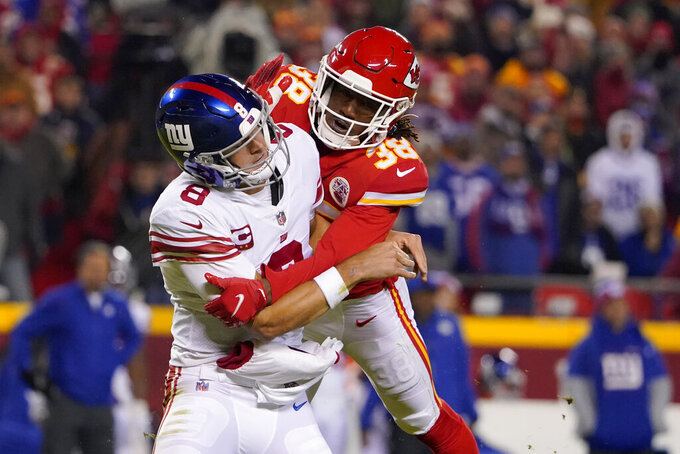 New York Giants quarterback Daniel Jones (8) is hit by Kansas City Chiefs cornerback L'Jarius Sneed (38) after throwing during the first half of an NFL football game Monday, Nov. 1, 2021, in Kansas City, Mo. Sneed was charged with roughing the passer on the play. (AP Photo/Ed Zurga)

OPENING LINE: Chiefs by 1, according to FanDuel SportsBook

TURNOVER DIFFERENTIAL: Packers plus-8; Chiefs minus-11.

PACKERS PLAYER TO WATCH: QB Jordan Love. Could it be anybody else? The Packers learned Wednesday that Aaron Rodgers was going into the NFL's COVID-19 protocols, shelving him for at least one week. That means Love, who was picked in the first round of the 2020 draft, is expected to make his first career start. And whereas Rodgers is the reigning NFL MVP and one of the game's most accomplished quarterbacks, his understudy has thrown just seven regular-season passes in his short career.

CHIEFS PLAYER TO WATCH: LB Nick Bolton has led the Chiefs in tackles the past two weeks while taking over for Anthony Hitchens, the veteran linebacker who has been sidelined with a triceps injury. Bolton had 15 tackles with four for a loss in a loss to Tennessee, then made 11 stops with a quarterback hit as the Chiefs rallied to beat the Giants on Monday night.

KEY MATCHUP: Packers RB Aaron Jones against KC run defense. Jones will undoubtedly be Love's best friend against Kansas City, taking some of the pressure off the young QB to win the game through the air. Jones will face the league's 22nd-ranked run defense, which just allowed more than 100 yards on the ground for the fifth time in six games.

KEY INJURIES: Rodgers was joined on the COVID-19 list by backup CB Isaac Yiadom. OT David Bakhtiari still hasn’t made his 2021 debut after tearing his left anterior cruciate ligament on Dec. 31, though he is practicing with the Packers again. CB Kevin King (shoulder/back) has missed Green Bay’s last three games but has been practicing this week, and DLs Jack Heflin (illness), Kingsley Keke (concussion) and Dean Lowry (hamstring) didn’t practice Wednesday. ... Hitchens returned to practice for Kansas City this week, but RT Mike Remmers (knee) remained out for the second straight week.

SERIES NOTES: The Packers have won three of the last four meetings in a series that famously began with their victory over Kansas City in the inaugural Super Bowl. The Chiefs dominated the series in the 1990s, but Green Bay has won both meetings since former assistant Andy Reid took over in Kansas City.

STATS AND STUFF: The Packers have won seven straight since opening the season with a 38-3 loss to the Saints in Jacksonville, Florida. … This will be the first game Rodgers has missed since 2017, when he played just seven games due to a collarbone injury. … Packers WR Randall Cobb is coming off his second two-TD performance of the season. … The Packers have a positive turnover margin in seven straight games, matching the longest streak in team history. … Packers outside linebackers coach Mike Smith worked on Reid’s staff in Kansas City from 2016-18. Smith also was on Texas Tech’s coaching staff when Chiefs QB Patrick Mahomes played there. … Packers offensive coordinator Nathaniel Hackett’s father, Paul, held the same position with the Chiefs from 1993-97. … Chiefs WR Tyreek Hill needs three TD catches to pass Chris Burford (55) for third place in franchise history. Tony Gonzalez (76) and Otis Taylor (57) top the list. Hill also is tied for third with Jamaal Charles (64) for total TDs in a career. Priest Holmes tops that list with 83. ... Chiefs LB Willie Gay Jr. has interceptions in back-to-back games after starting the season on injured reserve. ... TE Travis Kelce is tied with Holmes for third on the Chiefs' career list with 8,447 yards from scrimmage.

FANTASY TIP: Feeling lucky? Love is going at a bargain price in weekly leagues and will be going against a defense that has given up big yardage to just about everyone. But a safer bet would be Jones and backup A.J. Dillon, both of whom should get plenty of rushing attempts as Green Bay tries to take some pressure off Love on Sunday.