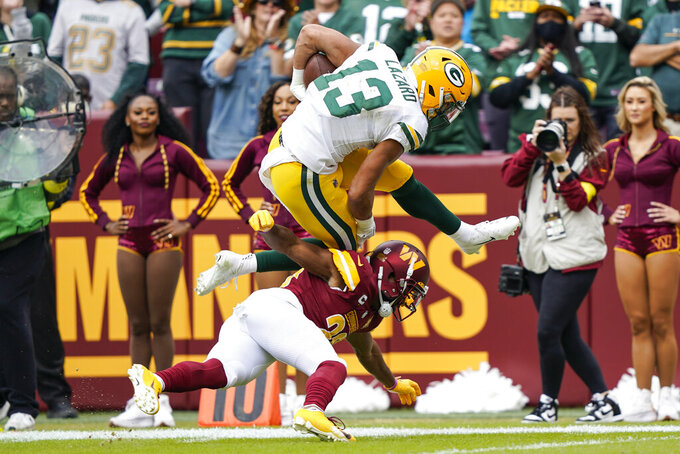 Lazard hurt his shoulder in the Packers’ 23-21 loss at Washington last weekend. Lazard said he could feel immediately that the injury could be troublesome.

“A pop, a crack — snap, crackle, pop,” Lazard said. “Three Rice Krispies men showed up, too. Not the good kind. All three of them.”

Lazard didn’t practice Wednesday or Thursday. Lazard said he didn’t believe the shoulder would be a long-term issue, but added that he doesn’t expect to be available for the Sunday night game against the Bills.

“This week, probably not,” Lazard said. “But take it day by day and see how it goes.”

Lazard has 26 catches and leads the Packers in yards receiving (340) and touchdown receptions (four) despite missing a season-opening loss at Minnesota with an ankle injury. His potential unavailability provides additional complications for Green Bay’s receiving group as the Packers (3-4) try to snap a three-game skid.

Randall Cobb is on injured reserve and will miss a second straight game Sunday because of a high ankle sprain. Rookie second-round pick Christian Watson has missed Green Bay’s past two games with a hamstring injury, though he has practiced on a limited basis the past two days.

“Obviously, (I’m) just doing everything in my power to make sure I’m ready and just waiting on the word from them,” Watson said. “I can’t do much about it. I’m just taking care of what I can take care of.”