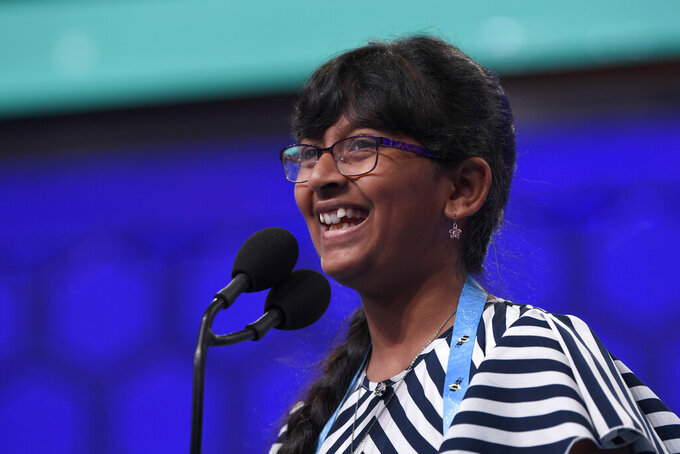 FILE - Harini Logan, 11, of San Antonio, smiles after correctly spelling her word as she competes in the finals of the Scripps National Spelling Bee in Oxon Hill, Md., Thursday, May 30, 2019. The Scripps National Spelling Bee is back, fully in person at its usual venue outside Washington for the first time since 2019. But the pandemic continues to affect kids who've spent years preparing to compete for spelling's top prize. (AP Photo/Susan Walsh, File)

Dev Shah's dream of returning to the Scripps National Spelling Bee ended in a soccer stadium, of all places.

On a cool, windy February day with occasional rain showers, Dev spent five miserable hours spelling outdoors at Exploria Stadium, the home of Major League Soccer's Orlando City club, ultimately finishing fourth in a regional bee that he was forced to compete in for the first time.

“My regional was hard enough to win when it wasn’t encompassing Orlando,” said Dev, a 13-year-old seventh-grader. “The fact that it’s basically representing a third of Florida, that was stressful and I started studying extra, but it didn’t work out in the end, unfortunately.”

While the National Spelling Bee is back — fully in person at its usual venue outside Washington for the first time since 2019 — Dev's experiences illustrate how the pandemic continues to affect kids who've spent years preparing to compete for spelling's top prize. Schools and sponsors have dropped out of the bee pipeline, regions have been consolidated and the bee has fewer than half the spellers it had three years ago.

“There is a sense that COVID marks a significant break between the bee that used to be and the spelling bee that is now,” said Grace Walters, a former speller who coached the 2018 champion and three of the eight 2019 co-champs. “And I don’t know if that’s a bad thing or not, but I’m trying to keep a positive attitude about it.”

Another huge change: Cincinnati-based Scripps broke with longtime partner ESPN and will broadcast the competition on its own networks, ION and Bounce. Actor and literacy advocate LeVar Burton was hired as host and will interview spellers and their families backstage, and last year's champion, Zaila Avant-garde, will be part of the broadcast as an analyst.

Scripps had 245 regional sponsors in 2020 for the bee that was ultimately canceled because of the pandemic. That number is down to 198 for this year's bee, which runs from Tuesday to Thursday.

“Many of our sponsors who are still with us, even, have expressed the concerns and the challenges brought forth by the pandemic,” said J. Michael Durnil, the bee's executive director. “Some of our sponsors realigned what their missions were and maybe the bee didn't fit. Maybe they lost person power and had to rethink their core business and the bee was not part of it. There's been a great reset in a lot of areas.”

Newspapers historically sponsored most regional bees, but as the print media business cratered, the sponsors became a hodgepodge of companies, nonprofits and government entities. Polk County Tourism and Sports Marketing, which sponsored the regional bee that Dev won in 2020 and '21, was among those that dropped out. That forced Dev to travel two hours from his home in Seminole, Florida, to Orlando, where the open-air competition dragged on as judges shivered.

Pro sports franchises have filled the sponsor void. The NFL's Carolina Panthers host a massive regional bee that sends four spellers from North Carolina and two from South Carolina. The Tennessee Titans do the same for most of their state. And Scripps ran five of its own regional bees for kids who lived in places with no sponsor.

The drop in sponsors isn't the main reason the bee is smaller this year. The 2018 and 2019 bees had a wild-card program designed as an alternative pathway to the bee for spellers in tough regions. Karthik Nemmani, a student of Walters' and a wild card from the talent-rich Dallas area, won the bee in the program's first year.

But in 2019, more than half of the 562 spellers in the bee were wild cards, many of them younger kids who weren't competitive at the national level. Scripps had planned to scale back the program in 2020. Then the bee's longtime executive director departed and her replacement, Durnil, scrapped the wild cards altogether.

“It got dinged as a pay-for-play kind of opportunity, which is at odds with the mission and the heart of the bee, quite frankly,” Durnil said.

That leaves this year's bee with 234 spellers, all of whom qualified on merit. There are plenty of familiar faces. Akash Vukoti, a 13-year-old from San Angelo, Texas, who initially qualified as a first-grader, is competing for the fifth time. Fourteen-year-old Maya Jadhav of Fitchburg, Wisconsin, and 14-year-old Harini Logan of San Antonio, Texas, are each making their fourth appearances.

Spellers age out of the competition when they reach ninth grade, meaning those who qualified as sixth-graders in 2019 never got to experience another “Bee Week.” Only the top 11 spellers competed in person last year in a mostly empty arena at Walt Disney World.

“It's a privilege, I think, for all the eighth-graders in the 2022 bee to get to have that opportunity that the last two years, we didn't have,” Harini said. “Getting to experience that as our finale, we're very, very fortunate for that.”

By Teresa M. Walker 41 minutes ago
By John Marshall an hour ago
By Greg Beacham 2 hrs ago
By Tom Withers 2 hrs ago
By Rob Maaddi 3 hrs ago