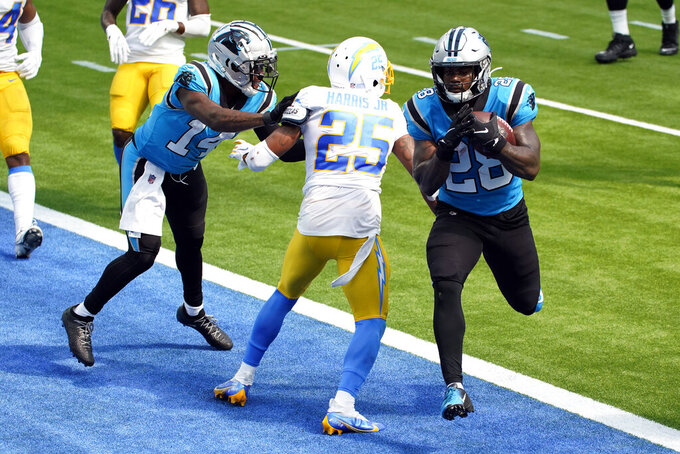 Carolina Panthers running back Mike Davis (28) runs into the end zone with for a touchdown after a reception during the first half of an NFL football game Los Angeles Chargers Sunday, Sept. 27, 2020, in Inglewood, Calif. (AP Photo/Ashley Landis)

INGLEWOOD, Calif. (AP) — Carolina was missing Christian McCaffrey, but got big efforts on defense and special teams to give coach Matt Rhule his first NFL victory.

The Panthers forced three Los Angeles turnovers and Joey Slye kicked five field goals in a 21-16 win over the Chargers on Sunday.

“It was huge, especially coming on the road, creating your own energy. And the defense did just that,” said Teddy Bridgewater, who was 22 of 28 for 235 yards and a touchdown. “Of course you want to turn turnovers into seven points instead of field goals. But the defense created those turnovers and created energy and we fed off those guys.”

Carolina snapped a 10-game losing streak dating to last season. It came down to the final play, with the Chargers in position for a go-ahead touchdown in the final seconds.

“When it comes down to the wire, it’s like relief,” Rhule said. "For some of these guys it has been 10 straight losses. ... That can start to weigh on you. It was an ugly win, but a win nonetheless.”

The Panthers had not recorded a sack and allowed 65 points in their first two games but looked like a different unit. They sacked Justin Herbert twice and converted three turnovers into 12 points.

The Panthers (1-2) averaged 3.9 yards per carry without the All-Pro McCaffrey, who will miss at least two more games with a high ankle sprain. Mike Davis had 91 scrimmage yards (46 rushing, 45 receiving) and a touchdown.

“The first two games we felt like we weren’t really playing as we should," Davis said. "This week we wanted to be physical and just play for each other. That’s all it was."

The Chargers have dropped two straight after winning their opener at Cincinnati.

Herbert became the third quarterback since the merger to throw for 300 yards in his first two starts. The rookie was 35 of 49 for 330 yards and a touchdown, but also had a fumble and an interception.

Los Angeles still had a chance to win at the end. After forcing Carolina to punt, the Chargers took over on the LA 1 with 1:43 remaining. They drove to the Carolina 28 before the drive stalled. Herbert had Keenan Allen open in the end zone with 6 seconds left but Tre Boston broke it up.

On the final play, Allen caught the ball at the Carolina 15, but his lateral to Austin Ekeler was too high.

“I’m disappointed in the loss. Those are games that you’d love to win, but turn the ball over three times, you can’t expect to win,” Herbert said.

After going three-and-out on its opening possession, Carolina scored on five consecutive drives in the first half. Four ended with field goals by Slye.

The Chargers took a 7-6 lead early in the second quarter when Ekeler ran it from around right end from 12 yards. Carolina regained the lead on the ensuing possession when Slye connected from 30 yards.

The Panthers got their only touchdown after a Chargers turnover. They took over at the Carolina 43 after Shaq Thompson recovered Joshua Kelley's fumble and scored in eight plays. Mike Davis caught Bridgewater's screen pass and went 13 yards to the end zone. Nasir Adderley blocked Slye's extra-point attempt to keep Carolina's lead at 15-7.

It looked like it was going to remain that way going into halftime before Donte Jackson intercepted Herbert's pass intended for Allen and returned it 66 yards to the LA 8. Two plays later, Slye was good from 22 yards.

“We knew they were going to bring more pressure. They hadn’t made it to the quarterback, so we were expecting them to bring pressure,” Charges coach Anthony Lynn said. “They beat us around the edge and got a turnover. But for the most part, I thought we got the ball out on time and handled the pressure well.”

The teams traded field goals in the second half before Herbert brought the Chargers within 21-16 with a 14-yard strike to Allen with 4:39 remaining. The 2-point attempt failed.

Allen moved into third place in receptions in franchise history, surpassing Kellen Winslow's 541. Allen has 548 receptions in his eighth season.

Panthers: CB Donte Jackson (toe) was injured during the second half and did not return.

Chargers: CB Chris Harris (ankle), OT Bryan Bulaga (back) and WR Mike Williams (hamstring) were injured in the second half and did not return.

Chargers: Have two straight on road, beginning next Sunday against Tampa Bay.