Panthers' Brady says offense must continue to evolve in NFL 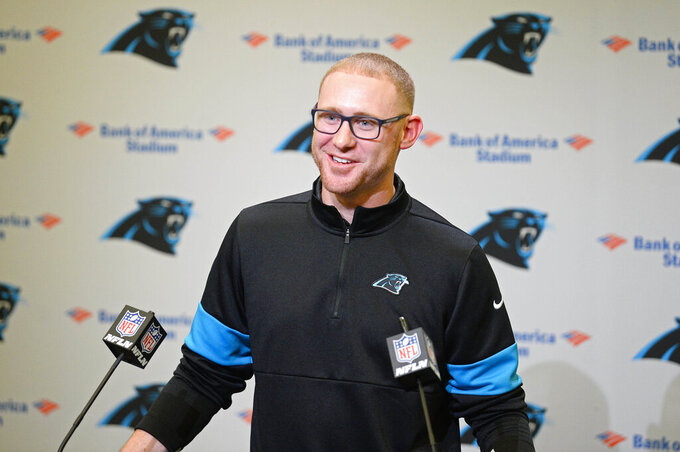 CHARLOTTE, N.C. (AP) — Joe Brady's offensive system worked wonders at LSU this past season, helping the Tigers lead the nation in yards and points en route to a unbeaten season that culminated in a 42-25 win over Clemson in the national championship game.

But Brady said there's no guarantee that scheme will work at the NFL level — or that it will be the system he runs next season with the NFL's Carolina Panthers.

The Panthers' new offensive coordinator was non-committal Friday over the idea of bringing his spread offense concepts to the NFL, instead saying he plans to develop a system that best utilizes the skills of the players on Carolina's roster.

“We found what our players did well and we put them in position to have success," Brady said of his one season at LSU. “... We weren't running plays to run plays. We were truly looking to find out what our guys do well. And that takes time. In a professional league, that's OTAs, that's minicamp, that's training camp.”

Brady said that means changing with the times.

He believes it is important to be innovative and stay ahead of the curve.

“The game evolves every year and I think as a play caller, as a coach, you have to evolve,” Brady said. “I'm not a big believer that what you do today is necessarily going to work tomorrow or that what we did this year is going to work next year.”

Brady went on to say, "The game you saw in the NFL this year is probably going to change next year and you have to be innovative and stay on top of it. Look, there is no such thing as a bad idea right now. So let's work toward creating a system that we feel proud of.”

The 30-year-old Brady is the youngest offensive coordinator in the NFL.

His father was a football coach, and Brady spent some of his time in elementary school drawing up plays on random sheets of paper.

He spent two seasons as an assistant with the New Orleans Saints, and comes to Carolina after a year in which LSU quarterback Joe Burrow won the Heisman Trophy, throwing for an FBS single-season record 60 touchdown passes.

Chances are there won't be a Brady-Burrow reunion in the NFL considering the Panthers don't pick until seventh overall, and the quarterback is expected to go No. 1 overall to the Cincinnati Bengals.

Brady, who agreed to join the Panthers on Tuesday, said it is far too early to evaluate the team's quarterback situation, and he didn't want to get into talking about specific personnel.

Cam Newton has been Carolina's quarterback since 2012, but the 31-year-old has struggled with shoulder and foot injuries the past two seasons and his future with the team remains uncertain. The Panthers can save $19 million under the 2020 salary cap if they cut or trade Newton.

Kyle Allen and Will Grier are the other options at quarterback currently on the roster.

Brady said so much of what he'll do depends on who's on the roster — and that it's far too early to know that right now.

“Our system is going to be doing what our players do best,” Brady said. “And I think that changes year to year. That changes based upon what you have. At the end of the day it's all about a vision of what you have for your players. Each person on your offense, you should have a vision for. When you can find guys that fit the vision and can understand their role, that is when you have success."