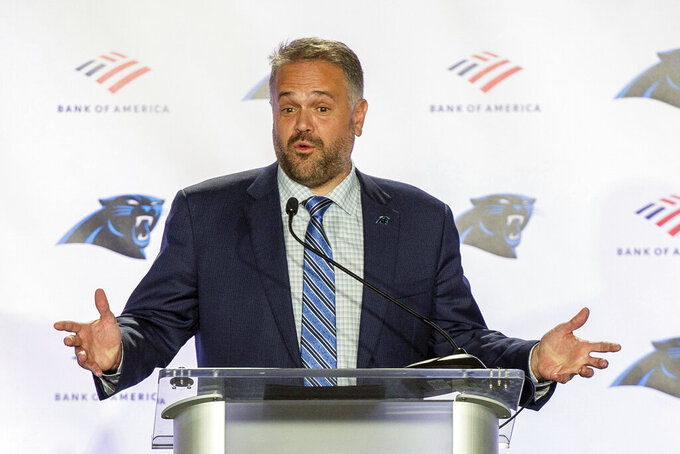 FILE - In this Jan. 8, 2020, file photo, Carolina Panthers NFL football team head coach Matt Rhule talks to the media during a news conference at the teams practice facility in Charlotte, N.C. Rhule said he is considering kneeling alongside his players for the national anthem this season to support the movement against racial injustice. (AP Photo/Mike McCarn, File)

CHARLOTTE, N.C. (AP) — Carolina Panthers coach Matt Rhule said he's considering kneeling alongside his players during the national anthem this season in support of the movement against racial injustice.

The first-year coach hired from Baylor previously has told his players that he will support them for expressing their views about social injustice.

“I will support my players with whatever they do and then when the time comes I will really think deeply about what is the best thing for me and what is the best way I can show my support,” Rhule said.

In 2016, San Francisco 49ers quarterback Colin Kaepernick began kneeling during the national anthem to protest racial injustice. His ex-teammate Eric Reid kneeled alongside him and later played for the Panthers. Both players reached settlements with the NFL after filing grievances alleging owners colluded to keep Kaepernick out of the league.

Texans coach Bill O'Brien previously has said he will take a knee alongside his players during the national anthem.

Rhule, who like O'Brien is white, said he will confer with his players before making any decision about whether to kneel.

“I think a lot of this has come from the players so I will wait to see what direction they are leaning, and then I will make my decision,” Rhule said.