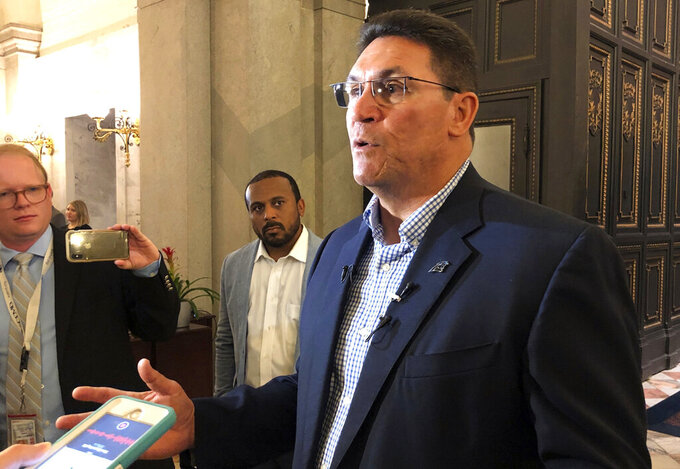 Carolina Panthers coach Ron Rivera talks to reporters as he visits the South Carolina Statehouse, Thursday, April 11, 2019, in Columbia, S.C. Rivera was talking to lawmakers about a bill to provide about $120 million in incentives to get the NFL football team to move its practice fields and headquarters to South Carolina (AP Photo/Jeffrey Collins)

Panthers coach Ron Rivera told reporters he enjoyed the meetings Thursday, although he took no stance on where he'd like to practice or have his offices.

"We're not a big city team like New York or Chicago. We're a regional team. Our fan base doesn't come from just one area. It comes from an area going from North and South Carolina," Rivera said. "We really do believe in the model of uniting two states together."

Rivera also repeated the Panthers' mantra since their creation in 1993 that they are "two states, one team."

The Panthers currently practice and play in downtown Charlotte, North Carolina, just inside the state line. South Carolina lawmakers are considering about $120 million in tax breaks and other incentives to get them to move some operations about 15 miles (24 kilometers) south to Fort Mill.

South Carolina Gov. Henry McMaster is an enthusiastic backer of the deal and could be seen Thursday outside his office talking to Rivera and hamming it up with Panthers mascot Sir Purr.

The House passed the incentive bill 90-25 on March 26, less than two weeks after Panthers owner David Tepper had a private meeting with McMaster and several lawmakers about the new practice fields. Tepper, who bought the team in 2018, wants an indoor facility built as soon as possible because the Panthers had to practice in a hotel ballroom several times late last season because of heavy rain.

Tepper hasn't commented publicly since his meeting in South Carolina. North Carolina officials said they plan to talk with the Panthers about keeping all their operations in North Carolina. The team currently practices and has its offices near where it plays at Bank of America Stadium in downtown Charlotte.

The incentives bill is currently stalled in the Senate after Democratic Sen. Dick Harpootlian of Columbia objected to it. He hired a private economist who disagreed with the state Commerce Department's analysis of the impact of creating a new facility for the Panthers in South Carolina.

The state's analysis assumes all 150 players, coaches and staff would move to South Carolina and spend all their wages in the state; that all the construction expenses would be spent in South Carolina; and that the complex would be on par with one of the NFL's most popular franchises, the Dallas Cowboys, according to the report.

Rivera, a couple of his players and Sir Purr stood in the balconies of the House and Senate as they were honored. They also met briefly with lawmakers in a room off the Senate chambers