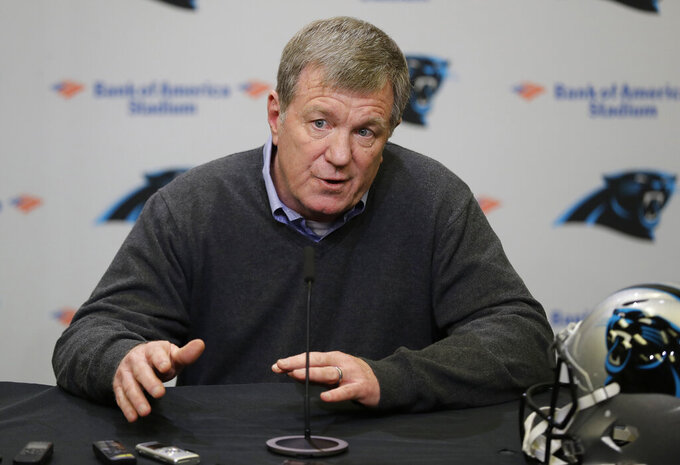 FILE - In this April 17, 2019, file photo, Carolina Panthers general manager Marty Hurney speaks to the media in Charlotte, N.C. The Panthers have fired Hurney after the team lost eight of its last nine games and failed to make the playoffs for a third straight season. Hurney’s contract was set to expire after the season. (AP Photo/Chuck Burton, File)

The Panthers fired their GM for a second time on Monday after the team lost eight of its last nine games and failed to make the playoffs for a third straight season.

Hurney’s contract was set to expire after the season.

“Marty is a little more traditional and I am probably a little more data-driven and analytical,” Panthers owner David Tepper said Monday in a videoconference call. “I think meshing those two things would be good. A little bit of fresh and refresh would be good. ... Sometimes you need a change, and it's that simple."

The team will immediately begin a search for a new general manager.

The Panthers are the fifth team this season to fire their general manager, joining the Lions, Jaguars, Texans and Falcons.

Tepper said he is looking for “alignment and collaboration” between the team's next general manager and first-year head coach Matt Rhule, who signed a seven-year, $62 million contract last year to join the Panthers.

“Collaboration doesn't mean you don't have arguments about who you are picking,” Tepper said. “(We want) a decision maker, somebody who is a good manager.”

Tepper didn't speculate about Hurney's replacement but said in terms of a timeline “the earlier, the better" — preferably before the 2021 NFL draft in April.

Hurney's ouster led to speculation he may be headed to Washington to reunite with former Panthers coach Ron Rivera. Washington fired its general manager Bruce Allen in 2019 and Rivera was hired to run football operations. Rivera and Hurney remain close friends.

Carolina plays at Washington on Sunday, adding some intrigue to this weekend's game.

“Some of the timing in this decision was out of that respect for Marty to make sure he has the opportunity to look at other places," Tepper said. “And for the organization, if we’re looking at other (candidates), people know we’re looking. So it’s mutually beneficial in that respect.”

This had been Hurney’s second stint with the Panthers. He was the general manager from 2002-12 before being fired by former owner Jerry Richardson. Richardson rehired Hurney in 2017.

Hurney drafted several star players such as quarterback Cam Newton in 2011 and linebacker Luke Kuechly in 2012. Both won NFL Rookie of the Year awards, making Carolina just the fourth team to have consecutive offensive or defensive rookies of the year since The Associated Press started presenting the awards in 1967. He also selected safety Jeremy Chinn in the second round this year, and he leads all rookies in tackles.

“I want to thank Dave and Nicole for the opportunity to be a part of this organization over the last three seasons,” Hurney said in a statement. “I have a great relationship with Matt and everybody in the building. I believe this team is well-positioned for the future and wish Matt, the players and the entire organization all the best.”

Tepper said Rhule will have a role in finding a new general manager.

“You look at successful organizations, and there’s a certain alignment between the head coach and the GM,” Tepper told the team’s website. “To think that you can do that without some sort of alignment is nuts. So to not have a head coach with some input into that is stupid. I don’t want to be stupid, OK?”

He also called Hurney is a “good evaluator of individual talents,” and added that he was a great teacher for him and Rhule — and he doesn't regret not firing him when he let Rivera go with four games left in the 2019 season.

“Me and Matt both learned a lot from Marty,” Tepper said. “Sometimes the students have to graduate.”