Panthers: McCaffrey's incredible season not all for naught 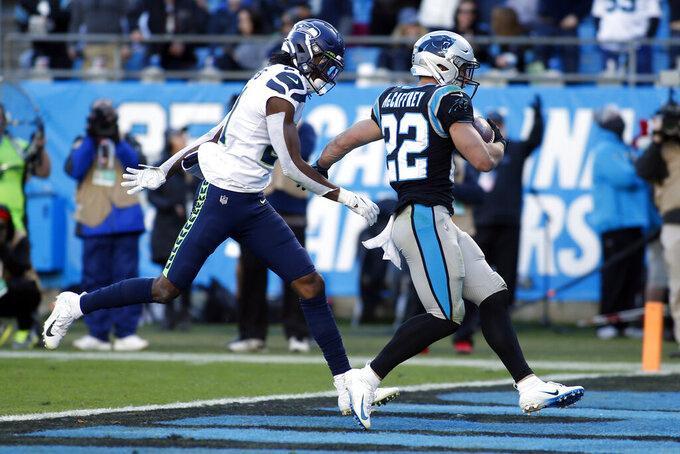 Carolina Panthers running back Christian McCaffrey (22) runs into the end zone for a touchdown as Seattle Seahawks cornerback Tre Flowers (21) chases during the second half of an NFL football game in Charlotte, N.C., Sunday, Dec. 15, 2019. (AP Photo/Brian Blanco)

McCaffrey became the first NFL player this season — and the first Panthers player ever — to gain 2,000 yards from scrimmage, but the Panthers lost 30-24 to the Seattle Seahawks on Sunday to fall to 5-9 on the season.

McCaffrey keeps racking up big numbers while his team keeps piling up heartbreaking losses. The third-year running back has been the shining star for the Panthers in an otherwise forgettable season that includes head coach Ron Rivera getting fired and a six-game losing streak.

While Boston said McCaffrey's effort this season won't help the Panthers reach the playoffs, he believes it could help them lure top free agents next offseason.

“This man is writing himself into the history book," Boston said. “He's showing us what we will have next year and I think that is important. This is going to be a big offseason for us and you are going to want guys to come here and play. And when you have guys like Christian, who wouldn't want to be his teammate? Who wouldn't want to be on an offense with that guy?”

McCaffrey carried 19 times for 87 yards and two touchdowns and caught eight passes for 88 yards on Sunday, marking the 11th time in 14 games he has amassed more than 130 yards from scrimmage. He leads the NFL in total yards (2,121) yards and touchdowns (18).

The NFL record for yards from scrimmage is 2,509, set by Tennessee's Chris Johnson in 2009.

Ravens quarterback Lamar Jackson is considered the favorite to win league MVP. But Seahawks K.J. Wright said this past week that McCaffrey would've been in the conversation had the Panthers been in playoff contention.

McCaffrey called it a “cool accomplishment" to reach 2,000 yards, but said he'd rather have more wins.

“I try to keep my mindset simple and control what I can control and do everything I can do to help my team win,” McCaffrey said. “Football is winning and losing. All the stats and other stuff don't mean much if you don't win.”

Interim coach Perry Fewell said McCaffrey “means everything” to the Panthers, saying the running back reminds him of Marshall Faulk.

Faulk and Roger Craig are the only two players in NFL history to gain 1,000 yards rushing and receiving in the same season. McCaffrey still has a chance to join that elite club if he can get a combined 186 yards receiving over the next two games against the Colts and Saints.

“He's productive, his attitude is awesome and his effort is outstanding," Fewell said. “He prepares each week for a winning performance.”

McCaffrey rarely leaves the field for Carolina. He's played more snaps than any running back in the league this season — and it's not even close.

A boundless body of energy, McCaffrey could be seen battling and churning his feet for every extra yard, regardless of the score Sunday. His fourth-quarter touchdown run of 15 yards helped the Panthers close a 20-point deficit to six and give his team a chance.

But like so many other games this season, Carolina came up short.

“We beat the heck out of him today,” Carroll said. “We kept bringing it and he kept fighting through it. I kept wondering, ‘Is he going to linger on the ground a little bit?’ And he didn't. He's just a magnificent player.”

“It's the NFL,” McCaffrey said. “You can't take anything for granted. Any time you step out on that field, it's a blessing. I don't care if you're 16-0 or 0-16, you're in the National Football League. That's got to be your priority.”