Panthers new GM Fitterer plans to 'be in on every deal' 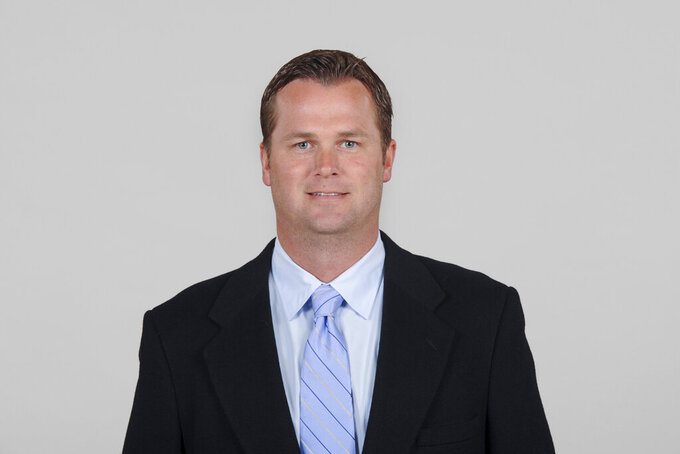 In this 2013 photo provided by the Seattle Seahawks is Scott Fitterer, at that time an executive with the team. The Carolina Panthers NFL football team hired Fitterer on Thursday, Jan. 14, 2021, to become their new general manager. (Seattle Seahawks via AP)

CHARLOTTE N.C. (AP) — Scott Fitterer says he plans to “be in on every deal” as he takes over as the Carolina Panthers' new general manager.

Fitterer’s comments came after he was asked in his introductory news conference Friday if he’d be interested in trading for Texans quarterback Deshaun Watson, who could be on the outs in Houston.

Fitterer wouldn’t specifically address Watson or any other player, saying “before we do anything outside, I need to find out who we have here.” But he made it clear the Panthers will explore all options to upgrade a team that has failed to make the playoffs in each of the last three seasons.

Finding a long-term solution at quarterback will be a top priority for Fitterer, who was hired away from the Seattle Seahawks by owner David Tepper on Jan. 14.

Teddy Bridgewater struggled at times in his first season under center in Carolina, particularly in the fourth quarter. He finished 4-11 as the team's starter and seemed to regress as the year went along.

The team's backups include P.J. Walker and Will Grier, who have three NFL starts between them.

“I want someone who can lift the players around them, someone who gives you an opportunity to win when the game is on the line in the fourth quarter,” Fitterer said of his ideal QB. “Someone that has the leadership qualities that when they walk into the building they know that is the person in charge. Those are the most important things.

"Then you get into the decision-making, the intelligence, the arm strength and accuracy, but really when it comes down to it, it's the leadership and ability to compete and win when the game is on the line."

Fitterer said he believes in drafting a quarterback every year.

The Panthers have the No. 8 pick in the NFL draft this year and quarterback is certainly an option.

Panthers owner David Tepper said that structurally not much has changed since the team fired general manager Marty Hurney in December.

He expects that Fitterer and first-year head coach Matt Rhule will work “collaboratively” on personnel decisions, but added that as a matter of practicality Fitterer will have say over the overall roster while Rhule will be in charge of the game day roster.

“I look forward to being in collaboration with Coach Rhule," Fitterer said.

Rhule said he knows that disagreements will come, but believes that's a good thing.

This is Fitterer's first general manager job after spending the last 20 years with the Seahawks working alongside GM John Schneider, mostly in evaluating college personnel. He was chosen following an extensive search by the Panthers that included 15 candidates who interviewed with the team over a two-week span.

Schneider said Fitterer will be “an amazing leader” for the Panthers.

“Scott is a great evaluator of talent, an excellent communicator and a tremendous person,” Schneider said.

Along with settling the quarterback position, Fitterer wants to upgrade the Panthers' offensive and defensive lines.

And he said he will work aggressively to “churn over” the bottom of the roster to improve the overall depth.

Tepper said along with Fitterer's extensive experience as an evaluator, one of the reasons he hired him was because he had the reputation of being a “calming voice” between Schneider and Seahawks coach Pete Carroll when it came to draft day decisions.