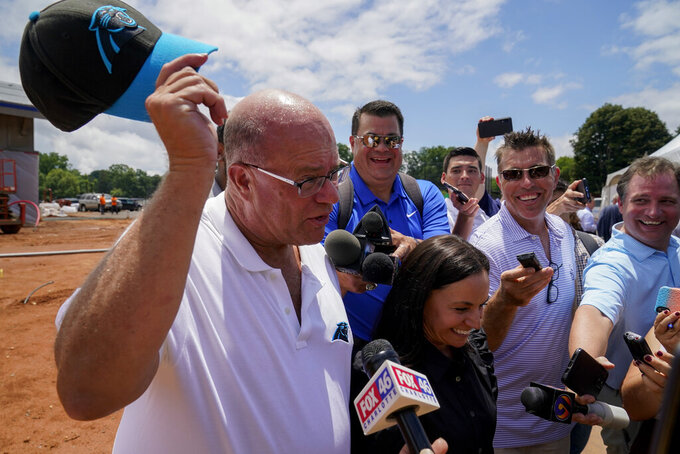 Carolina Panthers owner David Tepper and his wife Nicole joke with the media after announcing a donation to Miracle Park on Tuesday, June 8, 2021, in Rock Hill, S.C. Miracle Park, an inclusive place in Rock Hill where people with all different abilities can participate in a full-range of sports. (AP Photo/Chris Carlson)

Tepper said in 2019 he hoped to build a retractable roof stadium in Charlotte within the next 10 years, in part to draw other big sporting events to the city like the NCAA men's basketball Final Four. But Tepper has backed off that idea after the coronavirus pandemic turned the sports world upside down, prompting teams to limit seating for fans last year.

“There is no way in hell I would build a domed stadium in Charlotte, especially after COVID,” Tepper said Tuesday. “The weather is too beautiful and if anything it (COVID-19) shows you it is an advantage to have that kind of (open-air) building.”

Tepper made the remarks following an event in Rock Hill where he and his wife, Nicole, donated $500,000 to Miracle Park, a place where those with special needs can participate in sports. Panthers Charities donated an additional $200,000 to the park, which is set to open in August.

Tepper offered no update on a timetable for when he hopes to build a new stadium in Charlotte, indicating that will largely depend on outside funding from the city and fans.

“At some point that building will fall down,” Tepper said of the team's current downtown stadium, which opened in 1996. “But like I said before, I’m not building a stadium alone. The community is going to have to want it. If I’m (paying) a third, the community is (paying) a third and eventually in the future, and it could be a long way out, the PSL (permanent seat license) owners are a third, that’s a partnership. And if people don’t want it, they don’t want it. I’m not going to force it on anybody."

Tepper added that the Panthers are content to stay at Bank of America Stadium for now, saying "in the meantime we are trying to make the building we have the best possible building we can have.”

The Panthers are in the midst of several renovations to the stadium, including installing a new turf field in part because the stadium will host a Major League Soccer team, which begins play in 2022.

As for potential long-term plans to build a replacement, Tepper said he's considering two sites — one on the land known as the Charlotte Pipe and Foundry, which is located near the current stadium. The other option is tearing down that stadium and building a new one on the same site.

“If you had to do something you might go away (to another stadium) and play games for a couple of years and build a (new) stadium where it is right now," Tepper said. "Where we are is a great place in Charlotte and we will see what happens.”