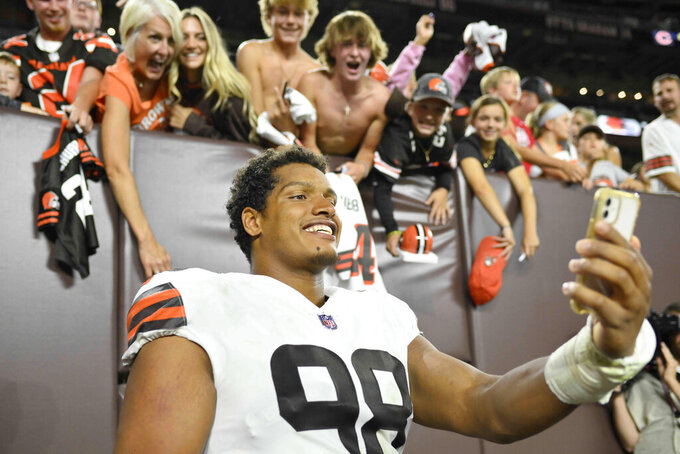 OPENING LINE: Panthers by 2 1/2, according to FanDuel SportsBook.

TURNOVER DIFFERENTIAL: Browns minus-3; Panthers minus-13.

BROWNS PLAYER TO WATCH: QB Jacoby Brissett moved into the starting spot when Deshaun Watson was suspended 11 games by the NFL for alleged sexual misconduct. This is nothing new to the 29-year-old Brissett, who made 37 starts with New England, Indianapolis and Miami. The Browns don’t need him to be a hero, but more of a game manager while relying on their strong running game.

PANTHERS PLAYER TO WATCH: RB Christian McCaffrey is back in the starting lineup after missing 23 of the last 33 games because of various injuries. McCaffrey looks to be in a great shape and is quietly motivated to prove he's not injury prone and still one of the league's best players.

KEY MATCHUP: QB Baker Mayfield vs. Browns. Welcome to the “Baker Bowl.” This game is all about the fiery Mayfield facing his former team, which traded him away after pursuing and eventually landing QB Deshaun Watson. Cleveland agreed to pay $10.5 million of Mayfield’s salary this season as part of a deal to trade him to Carolina. Mayfield took a $3.5 million pay cut to help facilitate the move and get out of Cleveland. Now the former No. 1 overall pick in 2018 has a new start with plenty of quality playmakers such as McCaffrey, D.J. Moore and Robbie Anderson. The big question will be how Mayfield handles himself emotionally during the game.

KEY INJURIES: Browns All-Pro RT Jack Conklin has hit every checkpoint in his return from extensive knee surgery in December. Conklin has been practicing with the starters for the past couple of weeks and seems poised to face the Panthers. If not, look for veteran tackle Chris Hubbard to fill in. ... The Panthers are monitoring the health of FB Gio Ricci, who is dealing with a hip issue.

STATS AND STUFF: The Browns are 1-21-1 since 1999 in season openers. They haven’t won on the road in Week 1 since 1994, when then-coach Bill Belichick guided them to a 28-20 win at Cincinnati. ... Brissett is one of 20 new players on Cleveland’s roster in 2022. … The Browns are looking to bounce back from a disappointing 8-9 season filled with injuries and drama. ... Mayfield suffered a shoulder injury in Week 2 and struggled throughout the season, which ended with him being sacked nine times by Pittsburgh and then sitting out the finale. ... Browns Pro Bowl RB Nick Chubb rushed for 1,259 yards last season despite missing three games with injuries. He joined Hall of Famers Jim Brown (7) and Leroy Kelly (2) as the only Browns to rush for more than 1,200 yards in multiple seasons. ... WR Amari Cooper, acquired in an offseason trade from Dallas, is expected to be Brissett’s top target. He’s averaged 73 catches, 973 yards and 7 TDs over the past four seasons. … Myles Garrett is second on Cleveland’s sacks list with 58 1/2. He’ll soon pass Clay Matthews (62) for first. … Rookie K Cade York was the star of the preseason, showing off his range on a daily basis in training camp. Coach Kevin Stefanski said the team has re-calibrated its metrics for third and fourth down because of York’s big leg. ... This marks the fifth consecutive season the Panthers have opened the season at home. Carolina is 2-2 in its previous four Week 1 matchups and has not made the playoffs in any of those seasons. ... The Panthers were 2-6 at home last season. ... Coach Matt Rhule is 10-23 in two seasons with Carolina. ... Panthers safeties Xavier Woods and Jeremy Chinn combined for 215 tackles last season — Woods while playing for the Vikings and Chinn for the Panthers. ... The Panthers feature four different starters on this year's offensive line. ... Rookie LT Ickey Ekwonu will make his first NFL start against Browns All-Pro DE Garrett, who had 16 sacks last season.

FANTASY TIP: Panthers WR D.J. Moore has looked exceptional during training camp and appears to have developed good chemistry with Mayfield. But can he find the end zone? Despite three straight seasons with at least 1,150 yards receiving, the fifth-year pro has never caught more than 4 TD passes in a season.