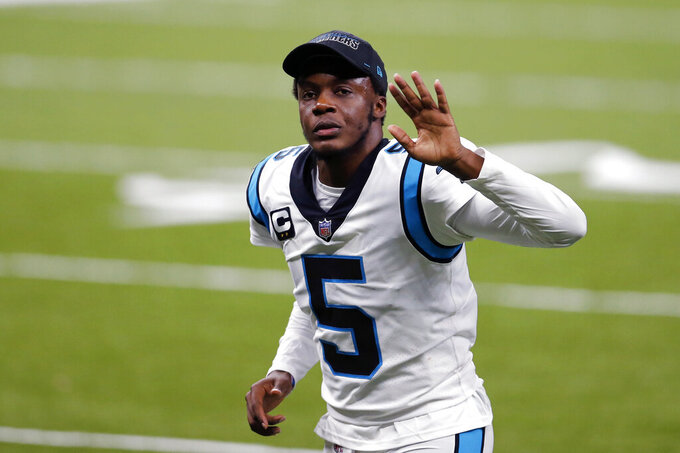 FILE - Carolina Panthers quarterback Teddy Bridgewater (5) waves as he runs off the field after an NFL football game against the New Orleans Saints in New Orleans, in this Sunday, Oct. 25, 2020, file photo. The Carolina Panthers are trading quarterback Teddy Bridgewater to the Denver Broncos, a person familiar with the deal tells The Associated Press. The person, speaking Wednesday, April 28, 2021, on condition of anonymity because neither team has announced the trade, said the Panthers are getting a sixth-round draft pick in return. (AP Photo/Brett Duke, File)

ENGLEWOOD, Colo. (AP) — Drew Lock didn't have to wait around for the NFL draft to get the serious competition for his starting job that new general manager George Paton has been promising for months.

Paton traded a sixth-round pick in this weekend's draft to the Carolina Panthers in exchange for veteran QB Teddy Bridgewater on Wednesday.

“Acquiring Teddy Bridgewater adds competition, experience and a strong veteran presence to our quarterback room," Paton said. "He’s a talented player and leader who’s had success in this league in a number of different situations. Being familiar with Teddy from Minnesota, he’s going to compete and do everything he can to help us win.”

The Broncos own the ninth overall selection Thursday night and have had their eyes on several of the quarterback prospects rated a notch or two below Clemson's Trevor Lawrence and BYU's Zach Wilson, who are expected to go 1-2 to the Jaguars and Jets, respectively.

“We’re really high on Drew,” Paton said at his pre-draft news conference last week. "I like seeing Drew here every morning when I come in. He’s working hard and trending in the right direction. As you know, he has a lot of talent. I think he’s becoming a better pro, but we’re still going to look at the quarterback position. I’ve said since I’ve gotten here that we want to bring in competition. That’s the goal, and we plan on doing that.”

Bridgewater went 4-11 as the Panthers' starter last year and struggled to win close games down the stretch. He completed 69.1% of his passes, throwing 15 touchdown passes and 11 interceptions.

Those numbers are better than Lock's.

The third-year pro from Missouri tied for the league lead with 15 interceptions in 13 starts and his passer rating ranked 32nd in the NFL last season. He was 4-9 overall with 16 touchdown throws and is 8-10 in two years as Denver’s starter.

After missing most of his rookie season with a thumb injury on his throwing hand, Lock missed 2 1-2 games with a rotator cuff injury to his throwing shoulder and another for COVID-19 tracing in 2020.

Bridgewater has a 26-23 career record as a starter over his six seasons in Minnesota, New Orleans and Carolina.

The Broncos have struggled for years to find a suitable replacement for Peyton Manning, who retired a month after Denver's 24-10 win over Carolina in Super Bowl 50 and is headed to the Pro Football Hall of Fame this summer.

The Broncos are the first team in NFL history to go five years without a playoff appearance following a championship parade, and they've had four consecutive losing seasons for the first time since ending a decade-long stretch of sub-.500 records in 1973.

It was widely believed Bridgewater wouldn't become available until after the draft and maybe wouldn't join a new team until June. But, according to the NFL Network, the Panthers agreed to pay a portion of Bridgewater's salary in 2021.

Bridgewater's three-year, $63 million contract signed last year calls for him to make $10 million guaranteed and up to $7 million more in 2021.

The Panthers have the eighth overall pick in the draft and with Darnold in the fold can target other areas of need including offensive tackle, linebacker, tight end or cornerback.