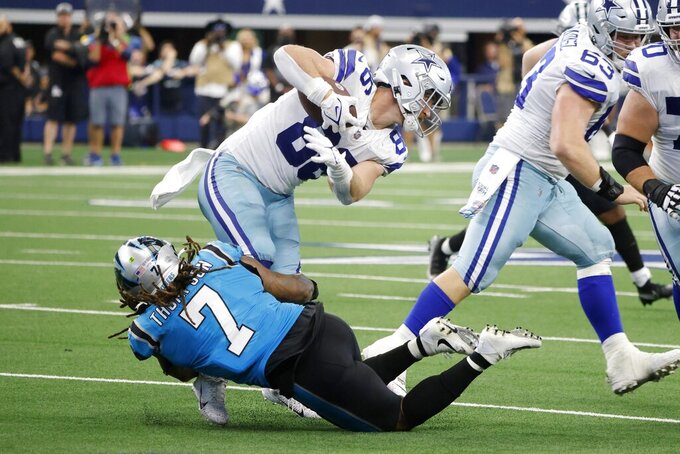 The Panthers quarterback was sacked five times and hit 11 times in a 36-28 loss to the Dallas Cowboys on Sunday. He’s now been sacked 11 times this season — tied for fifth most in the league — and hit 27 times through four games.

Yes, the Panthers are 3-1, but pass protection continues to be a problem. Darnold is experiencing the same constant pressure he endured playing for the New York Jets when he was sacked 98 times in 38 starts.

“Any time Sam has time, he’s going to make a lot of really good decisions,” Panthers coach Matt Rhule said after the game. “If he doesn’t have time, it’s not quite as good. Dak (Prescott) had a lot of time and Sam didn’t.”

Darnold handled the pressure well in the first half, but the Cowboys began dialing up more complicated blitz packages in the second half and started to get to Darnold.

Not only did they get him on the ground and deliver timely hits, but two of the pressures resulted in two Trevon Diggs interceptions — and led to 10 Dallas points.

“They did a lot of stuff. A lot of stunts," Panthers center Matt Paradis said. "They are a multiple-style defense. They do stunts, they're going to just do straight rush, bring pressure, mug them up, drop them back, they do a lot of stuff. It has got some complexity to it. It's nothing I haven’t seen before (but) we have to protect better.”

Darnold's job was a little more difficult Sunday with running back Christian McCaffrey out with a hamstring injury. He said he expects other teams to follow the Cowboys' defensive game plan moving forward.

“I’m sure teams will try to do the same thing, the same games and all that stuff," Darnold said. "We just gotta be ready for it, we gotta watch the tape and grow from it.”

One of the moves the Panthers made to counteract the blitzes was go to a no-huddle offense, resulting in two Carolina touchdowns in the fourth quarter, although the comeback ultimately fell short. Darnold still finished with four touchdowns — two rushing and two passing.

Darnold is emerging as a threat in the running game of all places. He ran for two scores on Sunday, giving him five on the season — the most of any QB through four games in the Super Bowl era. Darnold's athletic ability and willingness to run the zone read option has been a pleasant surprise for the Panthers.

He's on pace to rush for more than 20 touchdowns this season, which would shatter the NFL record for most TDs rushing in a season by a quarterback currently held by former Panthers QB Cam Newton, who had 14 in 2011.

One of the reasons the Panthers dealt Arnold is because they were encouraged about the emergence of Tremble, but he played just 27 snaps on Sunday.

Meanwhile, Henderson allowed a TD pass to Amari Cooper in his first game in Carolina.

Wide receiver D.J. Moore. Moore is solidifying himself as one of the top wide receivers in the league, excelling against the Cowboys for 113 yards and two touchdowns on eight catches. Moore has emerged as Darnold's favorite playmaker and is tied for second in the league in receptions (30) and is fourth in yards receiving (398). Part of the reason Moore has excelled this season is because of his route-running, which has dramatically improved over last season.

Kicking game. The Panthers continue to struggle to find stability at kicker with Zane Gonzalez missing a costly 54-yard field goal early in the third quarter. That appeared to turn the momentum as the Cowboys went on a 23-0 run to blow the game open. Gonzalez is no longer guaranteed a roster spot after previously being claimed off waivers, so the Panthers could make a move.

Rhule said McCaffrey is going to try to practice Wednesday after missing the Cowboys' game with a hamstring injury. Rhule said the team will evaluate where McCaffrey is before making any decisions on whether he might play Sunday against the Philadelphia Eagles. ... Panthers LB Shaq Thompson is expected to have an MRI on his foot injury that kept him out for a few plays Sunday. ... DE Haason Reddick said Monday he suffered a neck stinger but expects to be ready for the Eagles.

245 — Yards rushing allowed by the Panthers on Sunday against the Cowboys, the sixth most in franchise history. Carolina's defense had only allowed 135 yards rushing in its first three games.

The Panthers will look to improve to 3-0 at home when they host the Eagles on Sunday. This will be the first time this season Phil Snow's defense will face a mobile quarterback in Jalen Hurts.