Pass-rusher Ngakoue no longer wants to re-sign with Jaguars 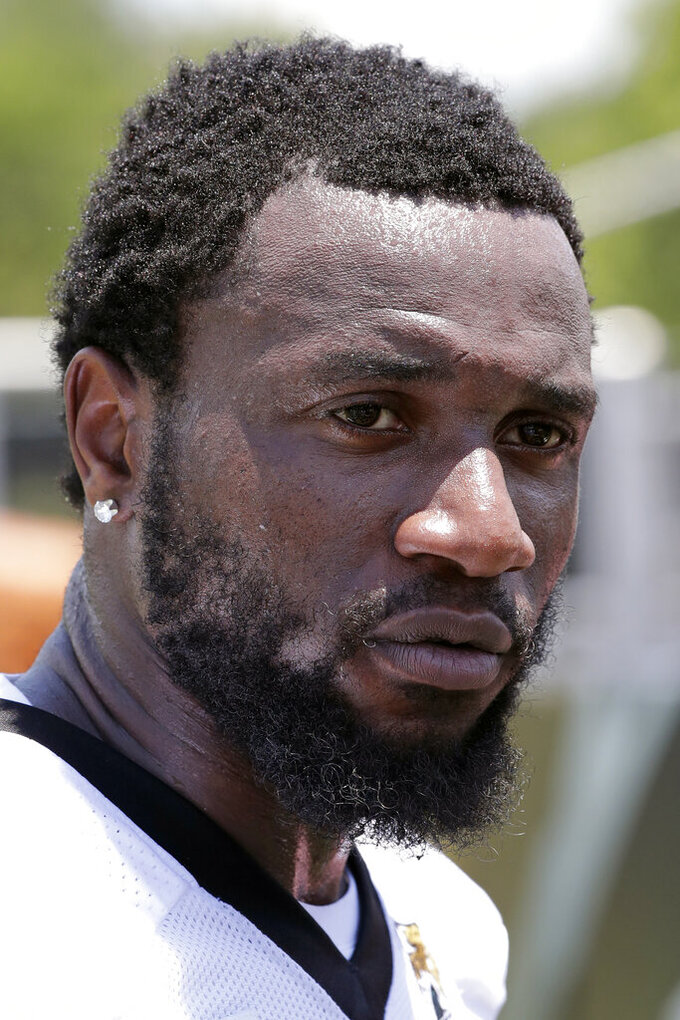 FILE - In this May 21, 2019, file photo, Jacksonville Jaguars defensive end Yannick Ngakoue talks with reporters after an NFL football practice in Jacksonville, Fla. Standout defensive end Yannick Ngakoue no longer wants to sign a long-term deal with the Jacksonville Jaguars. Ngakoue announced his desire to play elsewhere via social media Monday, March 2, 2020, a move that could force the team to place the franchise tag on the 24-year-old disgruntled defender and trade him.(AP Photo/John Raoux, File)

Ngakoue announced his desire to play elsewhere via social media Monday, a move that could force Jacksonville to place the franchise tag on the 24-year-old disgruntled defender and trade him.

“The Jaguars are aware I no longer have interest in signing a long term contract in Jacksonville,” Ngakoue posted on Twitter and Instagram. “Duval, I love you and gave you guys everything I got. I’m thankful for the journey and look forward to continuing my career elsewhere.”

Ngakoue has 37 1/2 sacks and 14 forced fumbles in four seasons. The speedy strip-sack specialist made the Pro Bowl in 2017 and was an alternate the last two seasons.

A third-round draft pick from Maryland in 2016, Ngakoue clearly outplayed his $3.84 million rookie contract. He made $2.025 million in 2019 — far less than other top playmakers at his position.

He had been seeking around $22 million a year to remain in Jacksonville, but the Jaguars don't seem to consider him a complete or elite defensive end worthy of that much annually. Jacksonville also selected Ngakoue's potential replacement, Josh Allen from Kentucky, with the seventh overall pick in the 2019 NFL draft. Allen had 44 tackles, 10 1/2 sacks and two forced fumbles as a rookie and made the Pro Bowl as an alternate.

Jacksonville is expected to place the franchise tag on Ngakoue, a move that would guarantee him more than $19 million in 2020. But he also could refuse to sign the tender, essentially forcing a trade.

“There’s still a process that needs to be played, but I think you guys know how we feel about him and we want him here,” Jaguars general manager Dave Caldwell said at the NFL combine last week. "We’re going to try to get him here and keep him here one way or another. So I think I’ll leave it at that.”

If the Jaguars end up trading Ngakoue, they would be left with few pieces from their dynamic defense that carried the team to the AFC championship game in January 2018.

Defensive end Calais Campbell, cornerback A.J. Bouye and linebacker Myles Jack remain. But there are no guarantees Campbell and Bouye will stick around since they would count nearly $33 million combined against the salary cap next season.

Cornerback Jalen Ramsey and defensive end Dante Fowler were traded in separate deals to the Los Angeles Rams. Safety Tashaun Gipson and defensive tackle Malik Jackson were released before the 2019 season in a cost-saving move.

Linebacker Telvin Smith abruptly quit the team last May to “get my world in order” and eventually filed retirement paperwork to avoid mounting fines.

“He would still be a guy that we would have interest in bringing back at some point in time,” Caldwell said last week.