Past midpoint of big contract, Cousins hitting his stride 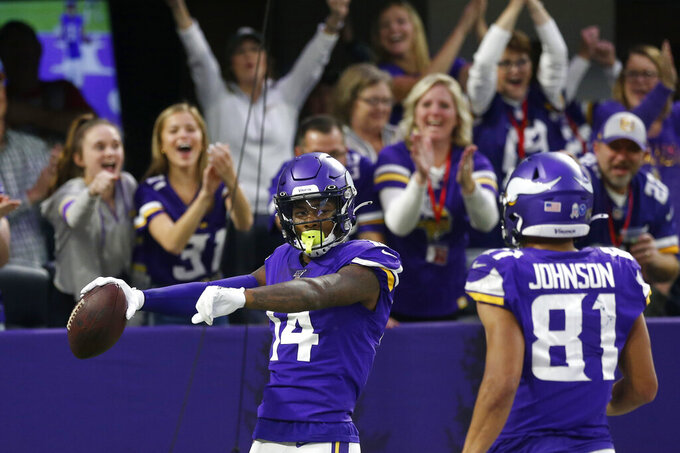 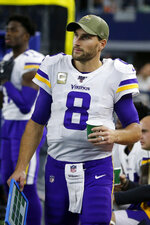 MINNEAPOLIS (AP) — In the aftermath of the 54-yard touchdown pass that Kirk Cousins threw to Stefon Diggs early in the fourth quarter that accelerated a furious comeback by the Minnesota Vikings, the always animated wide receiver was as fired up as ever as he stalked the sideline and screamed encouragement to almost everyone in his path.

Then the Metallica hit “Enter Sandman” started roaring on the stadium sound system, the in-house camera crew zoomed in on Diggs as he bobbed up and down like a boxer entering the ring, the decibel level spiked even higher, and Denver was in trouble.

Cousins, meanwhile, calmly waited for his next turn with the level-headed, CEO-style demeanor he strives to present. The rally was completed soon after with a fourth touchdown by the Vikings in as many second-half drives for a 27-23 win that raised their record to 8-3 and kept them from entering the bye week on a bad note.

The win was made possible by the deep ball to Diggs, who was the fourth option on a post route from the backside of the play as Cousins rolled out to his left to make a throw so difficult that a former coach of his once told him it will work “once a decade.” Cousins has hit it twice this season.

“That was a dime,” running back Dalvin Cook said. “That’s my quarterback.”

Just past the midpoint of his three-year $84 million contract with the unprecedented full guarantee, Cousins has begun to give the Vikings their money’s worth.

The second half of his first season in Minnesota was rough, with four losses over the final two months that were each traceable to a wilted passing attack. Then the Vikings were beaten in the first quarter of this season by division rivals Green Bay and Chicago, behind costly turnovers by Cousins against the Packers and his hesitance to take risks against the Bears. Since then? He’s been on quite the tear.

Having thrown 177 consecutive passes without an interception, Cousins has the longest active streak in the NFL. According to Sportradar data, only Matthew Stafford for Detroit has a higher percentage (14.1) of attempts this year for 20-plus-yard completions in the league than Cousins (13.1). He has connected on 42 of those, nearing his 2018 total (47) that reflected only 7.8% of his attempts.

With two-time Pro Bowl pick Adam Thielen having played only 16 snaps over the previous five games because of a hamstring injury, Diggs has been an indispensable part of the offense. He has sparked dissonance at times this season, when the fifth-year standout has felt under-utilized or upset by a conservative approach.

Fined more than $200,000 earlier this season for unexcused absences at the peak of his frustration, Diggs has not been shy about visible displays of agitation during games, including in that awful first half on Sunday that stuck the Vikings with a 20-0 deficit halftime.

There’s no play in football like a deep pass to get a team going, though, and deflate the opponent.

With Diggs and his route-running skill and straight-line speed and Cousins and his ability to sell play-action fakes and deliver an on-target ball, the Vikings have developed one of the most potent combinations in the league.

With Cook already past 1,000 rushing yards, defenses have had to honor the ground game, and offensive coordinator Kevin Stefanski has frequently struck a productive balance with his play calls to set up those potential game-breaking passes. Diggs leads the league with 11 receptions and 485 yards on passes traveling at least 20 yards in the air, according to the NFL’s NextGen Stats data.

Not coincidentally, Cousins has begun to check some of the empty boxes that, fair or not, have surrounded his career.

The Vikings have won both of their prime-time games so far, including at Dallas on Nov. 10 when they trailed by one point late in the third quarter. They were still down by 16 points early in the fourth quarter before beating Denver.

His performance in the final five games, with three at night and three against division foes, and in the playoffs, if they make it, will ultimately tell the tale of whether the Vikings will commit to him beyond his current contract. The heavy scrutiny will likely never cease, but he’s done a lot over the past two months to allay internal and external doubts.

“You guys can be as hard on me as you want. I’m living a dream. I’m well-compensated, and I’ve got to take the good with the bad, right? I’ve got a lot of good with my job, and if that means pressure and there’s weight and there’s expectations that sometimes are unfair, that comes with the territory. Welcome to maybe living life at a higher altitude than I used to. So that’s OK,” Cousins said.

“Sure, I would love to have all of the credit and none of the blame like Michael Scott says in ‘The Office,’ but it doesn’t work that way. If anything, when the blame gets there, I’d like to be able to set an example for my teammates of what it should look like to take blame and to point the finger at yourself and to own up.”