Path to first weekend was different for NFL officials, too 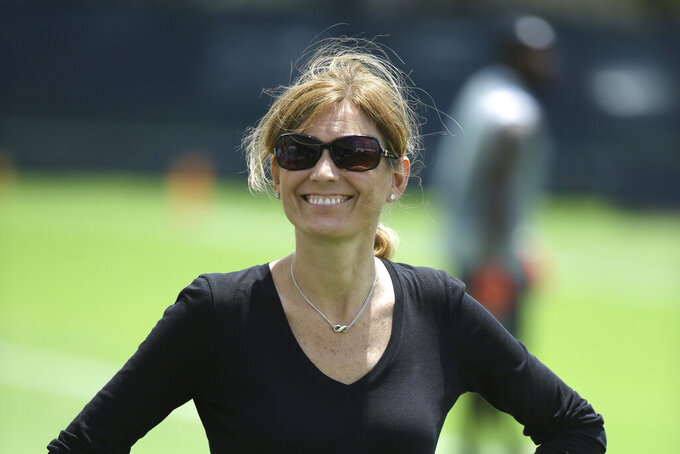 FILE - In this April 26, 2016, file photo, then-Miami Dolphins Executive Vice President of Football Administration Dawn Aponte stands on the field after a Miami Dolphins voluntary veterans football minicamp in Davie, Fla. For the past six-plus months, NFL football teams have been working virtually and eventually on the field to get ready for a season opener that came about despite the pain, tragedy and uneasiness caused by the coronavirus pandemic. Officiating crews have also been getting ready virtually for the most part, said Aponte, the NFL's chief football administrative officer.(AP Photo/Lynne Sladky, File)

EAST RUTHERFORD, N.J. (AP) — For the past six-plus months, the Pittsbugh Steelers and New York Giants have been working virtually and eventually on the field to get ready for a season opener that came about despite the pain, tragedy and uneasiness caused by the coronavirus pandemic.

It's been a tough road for Mike Tomlin's Steelers and Joe Judge's Giants heading into a nationally televised Monday night game. The path has been no easier for NFL officials.

This is going to be a different year for them, too. Referee Craig Wrolstad and his crew will be handling the Steelers-Giants game. Like the league's other officiating crews, they have been getting ready virtually for the most part, said Dawn Aponte, the NFL's chief football administrative officer.

While all officiating crews change personnel every season and become a new unit, a set crew won't be the norm this season. Regionalization of officials is in.

“With the regionalized aspect of it, there are not only the standard crews that we are used to seeing, there will be officials swapped in and out on a pretty regular basis,” Aponte said. “Where we can keep them together we obviously will, but that’s been a significant focus of this offseason. We have had a number of meetings with them virtually. They have not yet been to training camp.”

In some ways, the new crews are spending more time together because of virtual meetings, Aponte said.

What will definitely be different for the officials is traveling, particularly air travel. Aponte estimates only 30 to 50% of the officials will take planes on any given week.

“It depends on where the games are,” she said. “Our officials are all across the country. The majority of our referees reside on the West Coast, so it is difficult to keep them just West. They will need to fly. Where we can, normally we keep the officials on a two-hour drive time. This year we relaxed some of those rules to allow them to drive further.”

The officials have protocols, too. They must have a negative result from a COVID-19 test before they travel. The test takes 24 to 36 hours to process.

After arriving in the city where they are working, they will need a point-of-care COVID-19 test the day before the game. Those results are available in roughly 20 minutes, Aponte said.

“Again we are focusing on the health and safety of them as we are with everyone else,” Aponte said. “Where we can limit exposure and mitigate the risk that is the object of the exercise.”

The league has had to work with state and local officials to make sure the officials are either in compliance with mandates or have taken the appropriate steps to work.

New Jersey, where the Steelers and Giants will play at MetLife Stadium in East Rutherford, has a 14-day quarantine for people arriving from more than 30 states.

There are contingency plans should an official not be able to work. There are 16 games this weekend. The league has 17 seven-man officiating crews plus two extra officials. The extra nine officials are on alert should they be needed. The league also had developmental officials in cities that also can be employed.

“We are just making sure we can have officials officiate every game,” Aponte said. “We have been extremely focused on the players and coaches needing to play an NFL game and we also need officials to kick off as well.”

The crews also have spent some time virtually learning how to work with a six-man crew, and even a five-man crew, Aponte said.

"We are trying to cover all bases on that front,” she said.

Some other changes to watch this season.

Officials will be required to wear a mask or gaiter. They have been given electronic whistles, ending the need to uncover their mouth to blow the whistle.

Reviews will be done the old way, under the hood on the sideline. The on-field reviews with a tablet are out, so there are also no extra people on the field.

In past years, teams would only see the same crew twice, with no game closer than six weeks apart. That rule is not in effect this season.

Aponte laughed when asked if she was excited to be starting a season after months of meticulous planning.

“I feel like a kid at Christmas,” she said.