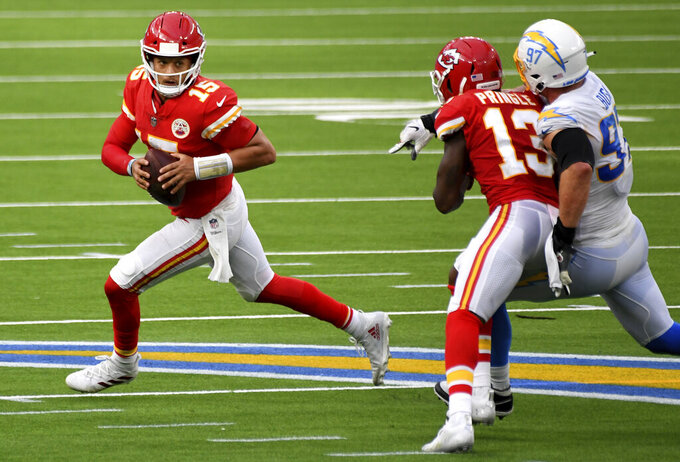 Quarterback Patrick Mahomes, left, of the Kansas City Chiefs scrambles against the Los Angeles Chargers in the second half of an NFL football game at SoFi Stadium in Inglewood, Calif., on Sunday, Sept. 20, 2020. Kansas City Chiefs won 23-20 in overtime. (Keith Birmingham/The Orange County Register via AP)

Patrick Mahomes showed he’s nearly as dangerous with his legs as he is with his arm.

The Kansas City Chiefs star quarterback displayed his scrambling ability in a 23-20 overtime win over the Los Angeles Chargers on Sunday with his 21-yard run on third-and-20, setting up the game-tying field goal late in regulation.

Mahomes ran more than 55 yards of total distance on that play, according to NFL NextGen stats. He covered even more ground on his three other third-down conversion runs, even if they gained fewer yards.

In all, Mahomes covered 962.2 yards of distance on the field during the game with his ability to scramble and move around the pocket to extend plays.

NFC BEST: No division looks tougher after two weeks than the NFC West. Arizona, Seattle and the Rams have won their first two games, while defending NFC champion San Francisco is 1-1 with the loss coming to the Cardinals. This marks just the second time since the start of the eight-division format in 2002 that teams in a single division went 7-1 through two weeks.

The other time it happened was in the 2002 AFC West, when the Raiders, Broncos and Chargers all started 2-0 and the Chiefs were 1-1. The Raiders were the only one of those teams to make the playoffs that year.

STARTING FAST: Green Bay, Seattle and Las Vegas are among the teams off to fast starts this season, scoring at least 34 points and winning the first two games. In the past 25 seasons, 13 teams have done that, but it doesn’t always lead to great on-field success. While the 1996 Packers and 2009 Saints won the Super Bowl those seasons, four teams missed the playoffs entirely, including the Bengals two years ago. The 2007 Patriots and 2013 Broncos lost the Super Bowl after those starts, with five others losing earlier in the postseason.

BIZARRO WORLD: For years, the Raiders have always been among the most penalized team in the NFL, leading to fans and some team members complaining of bias against late owner Al Davis. Those complaints have been silenced through the team’s first two weeks as the Las Vegas Raiders. Las Vegas has been penalized just six times, second fewest in the NFL, and benefited from 15 penalties for 194 yards by their opponents, which is second best in the league.

BLOWING LEADS: The most dangerous lead in Detroit appears to be a double-digit one. The Lions blew a 14-3 lead to Green Bay in a 42-21 loss Sunday, their record-setting fourth straight game of blowing a lead of at least 10 points. Detroit squandered a 17-point fourth-quarter advantage in the opener against Chicago and also blew big leads to Denver and Green Bay at the end of last season. The Lions have lost 11 in a row overall.

The Falcons had their own collapse this week, losing 40-39 to Dallas despite leading by 15 points with less than eight minutes to play. There have been only two other games in the past nine seasons when a team blew a lead that big that late in the game. Washington blew a 15-point lead to New Orleans in 2017 and the Falcons did it in the Super Bowl following the 2016 season when New England rallied from 28-3 down to win in overtime. Atlanta led that game by 16 points with less than seven minutes to play.