Patriots adjust to life without Gronk 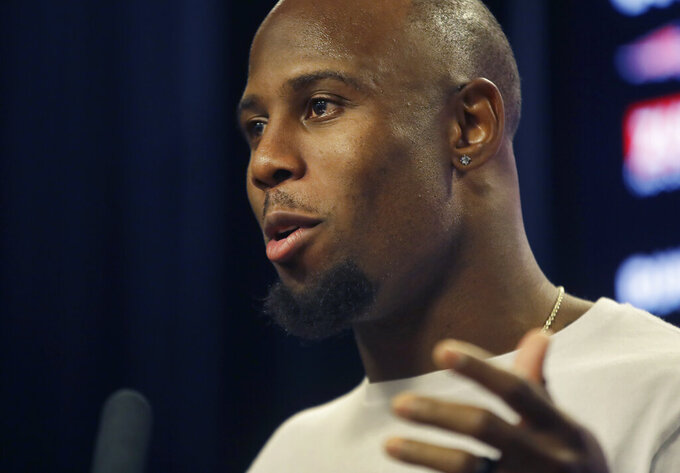 FOXBOROUGH, Mass. (AP) — The Super Bowl champion New England Patriots are back at work, and things are already a lot quieter.

Rob Gronkowski has retired, and the locker room is a more serious place without the fun-loving tight end who once declared himself the life of the party — in garbled Spanish, no less.

"There's only one Gronk," running back James White said on Wednesday, when the Patriots reported for training camp. "You can't replace that personality. He's a great football player, but you've got to play with who's out here."

A four-time All-Pro who was too fast for linebackers to cover and too big for defensive backs to bring down, the 6-foot-6, 265-pound Gronkowski caught 521 passes for 7,861 yards and 79 touchdowns in an injury-plagued nine-year career. He helped the Patriots reach the Super Bowl five times, winning three rings.

But he was also a larger-than-life personality known for emphatically spiking the ball after a touchdown catch; he once tried to do the same with an opponent, explaining after drawing a penalty "I took him and threw him out of the club."

Gronk's offseason partying — thrice starting with the Super Bowl championship parade — was a staple of social media, and he once announced in the locker room after a win: "Yo soy Fiesta!"

"Rob was one-of-a-kind, obviously, on the field, with what he's able to do as a player. We see that each and every week over the last nine years," special teams captain Matthew Slater said.

"His fun-loving spirit and personality, and his child-like joy that he brought each and every day to the workplace. His humility — just a genuine human being — certainly, those things are hard to come by in today's time, so we'll miss that."

But Gronkowski last played a full, 16-game season in 2011, with injuries to his back, knee, ankle and arm limiting his ability to stay on the field. He hinted at retirement after the 2017 season, and then made it official this March — a few months shy of his 30th birthday — saying on Instagram "it's time to move forward and move forward with a big smile."

"That's the thing in football — the one thing that's consistent is change," defensive back Devin McCourty said. "He looks like he's having an awesome time on Instagram. I'm really happy for him being able to have a great career and leave the game on your own terms. We'll see how it works out for us."

A second-round draft pick in 2010, Gronkowski caught just 47 passes for 682 yards and three touchdowns last season. (He added six catches for 87 yards in the 13-3 Super Bowl victory over the Rams, including two receptions on New England's only touchdown drive.)

Without him, the Patriots have brought in Matt LaCosse from the Denver Broncos as well as Benjamin Watson, who started his career in New England in 2004 before bouncing around the league. (Watson will miss the first four games of the season for violating the league's policy on performance-enhancing drugs.)

On Wednesday, the Patriots also signed free agent Lance Kendricks, who has spent eight seasons with the Rams and Packers. He has played in 125 games, catching 241 passes for 2,505 yards and 19 touchdowns.

But there's also a lingering doubt that Gronkowski is gone for good.

"He'll do what's best for him, but anybody that comes in this locker room is always welcomed with open arms," McCourty said, throwing in a dig at his twin brother, Jason. "We accept all guys. We took my brother in last year. He struggled for nine years in the NFL, so you talk about a guy like Gronk coming back, I think that'll be a lot easier."

Devin McCourty had also gone into the offseason unsure if he would return.

"I'm still here, huh," he said on Wednesday. "The fun hasn't stopped so I won't stop either."