Patriots back in playoff hunt, primed for another run 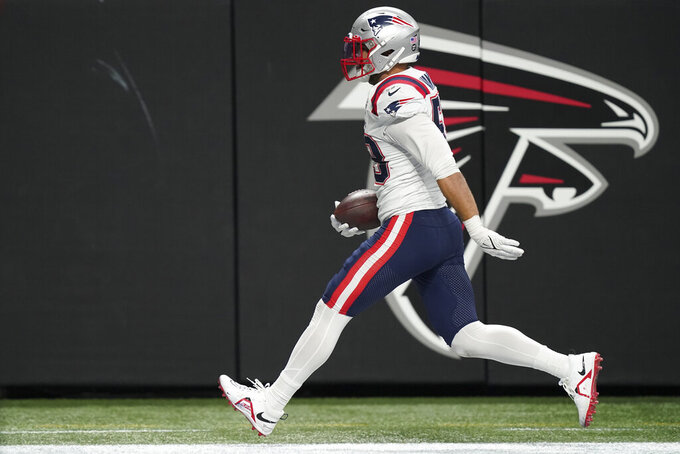 New England Patriots middle linebacker Kyle Van Noy (53) runs into the end zone after an interception for a touchdown against the Atlanta Falcons during the second half of an NFL football game, Thursday, Nov. 18, 2021, in Atlanta. The New England Patriots won 25-0. (AP Photo/Brynn Anderson)

After one season of irrelevance after Tom Brady decamped for Tampa Bay, the six-time Super Bowl champions are back in the conversation for an AFC East title — or perhaps more, in a conference with no dominant team.

New England has won five in a row behind rookie quarterback Mac Jones and a defense that has given him room to grow into the job that Brady held down for two decades.

“You understand they’re making a lot of stops, and eventually those guys will get a turnover like they always do," Jones said after the Patriots beat the Falcons 25-0 on Thursday night.

"We have a lot of veteran guys on that defense, and I’ve gone against them a ton in practice and they’re not a easy defense to go against. They do a great job and I hope they can continue to play like that, and we can step it up for them so we can get more points on the board.”

Jones completed 22 of 26 passes — none of them longer than 20 yards — for 207 yards. He also had an interception and was sacked three times for an offense that faced more competition from the New England defense (one touchdown) and special teams (four field goals).

Since giving up a 7-0 lead on the opening drive of a Nov. 14 victory over Cleveland, the Patriots have scored 70 unanswered points.

“I don’t want to brag too much, but I feel like we have one of the best defenses in the league,” said cornerback J.C. Jackson, who had his sixth interception of the year. “We’ve got a good pass rush and guys up front that are doing good this season. The secondary has always been pretty good and we are starting to build chemistry.”

The defense has allowed 13 points in the last three games, a total of 50 during the five-game winning streak and just 177 in all — an average of 16.1 points per game that is second-best in the league to AFC East-rival Buffalo.

The Patriots had four interceptions and four sacks at Atlanta, picking off Matt Ryan twice and Josh Rosen and Feleipe Franks one time apiece.

The Patriots scored only one offensive touchdown against the Falcons, settling for field goals four times —including two of three trips into the red zone. They also converted just four of 12 tries on third down.

“We had plenty of good plays,” coach Bill Belichick said. “But we didn’t get enough points because we had too many drive-stopping plays. You got to avoid those plays in order to score in this league. We just didn’t do a good enough job tonight.”

Linebacker Kyle Van Noy had eight tackles — five solo — and a pair of sacks. He also returned an interception 35 yards for a touchdown, capping the scoring.

When the Falcons had a third-and-1 from the Patriots 14 in the second quarter, Van Noy sacked Ryan for a 14-yard loss that forced them to attempt a field goal. After an illegal formation penalty on Younghoe Koo’s 45-yard attempt (which was good), he missed from 50.

New England was penalized five times for 59 yards, including two flags on punt returns that deprived the team of better field position.

“We had obviously way too many penalties,” Belichick said. “Killed us in the return game, killed us offensively. We got to do a better job there.”

Cornerback Jalen Mills left briefly in the first quarter but returned in the next series.

2 — The losing streak for Brady and the Buccaneers. After watching their former quarterback leave New England and then win the Super Bowl in his first year away, the Patriots may have the brighter future.

Thanks to the Thursday night game, New England has extra time to prepare for the Nov. 28 game against former linebacker Mike Vrabel and the Tennessee Titans.