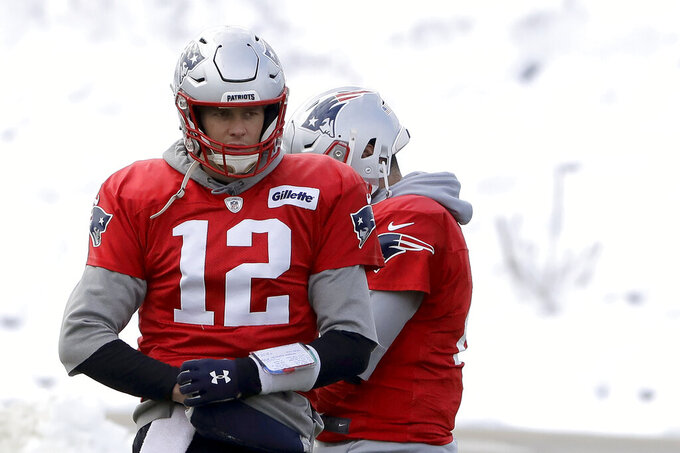 Beating the New England Patriots has been the primary focus for the Kansas City Chiefs since losing the AFC championship game last January.

The Chiefs had home-field advantage and NFL MVP Patrick Mahomes but the Patriots escaped Arrowhead Stadium with a 37-31 overtime win and went on to win their sixth Super Bowl title.

The rematch Sunday in New England has significant playoff implications for both teams.

The Patriots (10-2) have a one-game lead over Buffalo (9-3) in the AFC East and fell to the No. 2 seed in the conference behind Baltimore (10-2) with a loss at Houston last week. They would reclaim the top spot with a win over the Chiefs (8-4) if the Bills beat the Ravens on Sunday.

But Tom Brady and the offense are scuffling. The Patriots are just 2-2 since an 8-0 start. They scored only 30 points in the two wins. Brady was visibly frustrated with his receivers during the loss to the Texans and the offense is clearly missing tight end Rob Gronkowski.

A stingy defense has kept the Patriots atop the standings this season. However, Lamar Jackson and the Ravens scored 37 points in Week 9 and Deshaun Watson and the Texans scored 28 last week.

Mahomes led the Chiefs to 71 points in two losses against New England last season. The 42-year-old Brady doesn't have the playmakers to win a shootout this time around.

Since returning from injury, Mahomes is 2-1 with a pair of so-so performances in consecutive wins.

The Chiefs would clinch the AFC West with a win and Raiders loss.

Mitchell Trubisky threw three touchdown passes and ran for a score for the Bears (7-6). The Cowboys (6-7) have lost seven of 10 since a 3-0 start.

A potential preview of the NFC championship game, though the 49ers have to surpass Seattle to win the NFC West after losing at Baltimore last week and dropping to the fifth spot in the conference.

The 49ers have the league's No. 2 rushing offense but the Saints are No. 3 against the run so it'll be a matchup of strengths. Jimmy Garoppolo will have to avoid turnovers. His first-quarter fumble against the Ravens led to a touchdown. San Francisco is spending the week in Florida preparing for the game.

Drew Brees, Alvin Kamara and Michael Thomas present a difficult challenge for the league's top-ranked defense. The Saints already secured the NFC South and want to solidify the No. 1 seed and home-field advantage throughout the NFC playoffs.

The Panthers are reeling with four straight losses putting them on the verge of playoff elimination. Quarterback Kyle Allen has thrown 10 interceptions in his past six games after having none in his first five starts. Christian McCaffrey should get plenty of opportunities to overtake Nick Chubb for the rushing lead.

The Falcons would be fighting for a playoff spot if they played every opponent as they did the Saints. Atlanta upset New Orleans on the road in Week 10 and battled to a 26-18 loss on Thanksgiving.

Lamar Jackson is 23 yards rushing away from 1,000 and 62 away from breaking Michael Vick's single-season record for quarterbacks. The Ravens have won eight in a row and can't afford a letdown after taking over the top seed in the AFC. They would clinch the AFC North with a win and Steelers loss.

The Bills have won three straight by a combined 83-38 score and are 4-2 at home. They could jump all the way from a wild-card spot to the No. 1 spot if they beat the Ravens and Patriots the next two weeks.

Zac Taylor needed 12 games to get his first career win as head coach and the Bengals go for two in a row, though another win could loosen their grip on the No. 1 pick in the draft. They're currently one game ahead of the Giants for the right to pick first.

Andy Dalton was impressive in his first game back from a three-game benching and will try to lead Cincinnati to its first division win in 10 tries.

The Browns entered the season as a fashionable pick to win the AFC North but are almost assured that the NFL's longest postseason drought will extend from 2002 into the 2020 season.

Aaron Rodgers bounced back from a poor effort in a blowout loss to San Francisco with a vintage performance in a rout over the lowly Giants. He'll face another dismal NFC East team.

The Redskins have won two in a row after a 1-8 start. They'll rely heavily on the backfield tandem of Derrius Guice and Adrian Peterson to take the load off rookie quarterback Dwayne Haskins.

Deshaun Watson has the Texans leading the AFC South following an impressive win over the Patriots. He has another tough challenge because Denver has the fifth-ranked pass defense.

After frustrating Tom Brady, Houston's defense gets to face a rookie quarterback making his second career start. Drew Lock led the team to a win over the Chargers, becoming Denver's first QB to win his first start in his rookie season since John Elway and Gary Kubiak did so in 1983.

Ryan Fitzpatrick worked his magic against Philadelphia, throwing for 365 yards and three touchdowns in Miami's stunning 37-31 upset. He'll try to lead the Dolphins to their fourth win in six games after an 0-7 start. They should count heavily on Fitzpatrick throwing to DeVante Parker since New York has the stingiest run defense in the NFL.

The Jets had their three-game winning streak snapped by previously winless Cincinnati. New York would fall into last place in the AFC East with a loss.

The Colts are reeling, losing four of five to fall from first to third place. They've scored 17 or fewer points three times during that span and are missing four-time Pro Bowl receiver T.Y. Hilton and No. 2 receiver Devin Funchess.

Turnover-prone QB Jameis Winston has led the Buccaneers to double-digit wins in three of their past four games. They've feasted on last-place teams in that span.

Gardner Minshew takes over for the Jaguars after Nick Foles was benched. The rookie nicknamed the "Mississippi Mustache" provided a spark and some excitement for a struggling team earlier in the season. He'll need better protection than Foles got from the offensive line.

The Chargers have lost three in a row and are playing for pride. Defensive coordinator Gus Bradley, who was Jacksonville's coach from 2013-16, makes his second trip back in the past three years.

The Steelers are down to third-string QB Devlin Hodges but are still in the playoff mix as they usually are in December. The undrafted rookie has led Pittsburgh to three of its seven wins since losing Ben Roethlisberger for the season and starting 0-3. He could have a big day against Arizona, which is last in pass defense.

The more heralded rookie QB in this matchup, No. 1 overall draft pick Kyler Murray, has to look out for a dominant pass rush led by outside linebackers T.J. Watt and Bud Dupree.

The Vikings have a one-game lead for the NFC's second wild-card spot and only trail Green Bay by one game in the NFC North. Dalvin Cook's injured shoulder could determine how far they go in January or if they get there. Kirk Cousins is the NFL's second-highest rated passer.

David Blough is expected to make his second NFL start for the Lions, who lost Matthew Stafford and Jeff Driskel to injuries.

Ryan Tannehill has turned things around for the Titans, who are in the playoff mix after a 2-4 start. Tannehill is 5-1 and Tennessee has won three in a row. Derrick Henry is third in the NFL with 1,140 yards rushing, including three straight games with at least 145 yards and a TD.

The Raiders need a win to keep their playoff hopes going. Derek Carr had a tough game in a lopsided loss at Kansas City. Josh Jacobs is already over the 1,000-yard mark.

The Seahawks leaped into first place in the NFC West but have to keep winning to avoid dropping to the fifth seed in the NFC. They can't afford to look ahead to a first-place showdown with San Francisco in Week 17 with three games still to go before that matchup. Russell Wilson is playing at an MVP level and he has a strong run game to keep the offense balanced.

The Rams got their offense back on track against Arizona and Jared Goff threw his first TD pass since October to keep the defending NFC champs in the playoff chase. Todd Gurley is still looking for his first 100-yard rushing game this season but has been a big part of the offense in the past month.

The Eagles are desperate for a win after three straight defeats, including a 37-31 loss at woeful Miami. Despite their struggles, they would win the NFC East if they win their final four games. Carson Wentz and the offense finally got on track but the defense fell apart against Ryan Fitzpatrick and the Dolphins.

The Giants are playing spoiler with two games upcoming against Philadelphia. They could face another major shakeup with coach Pat Shurmur and general manager Dave Gettleman on the hot seat. Eli Manning is expected to make his first start since Week 2 because rookie QB Daniel Jones is injured. Saquon Barkley tries to continue his success against the Eagles. Barkley ran for 231 yards and two TDs and caught 16 passes for 140 yards and one score in two losses vs. Philly last year.