Patriots gear up for opener with Gillette simulation 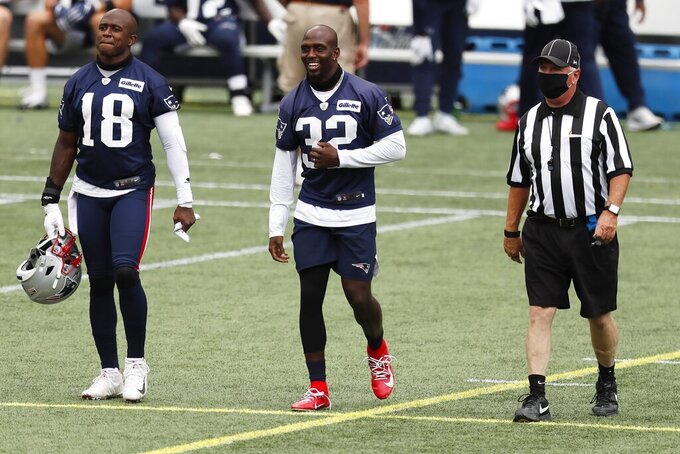 FOXBOROUGH, Mass. (AP) — On what would have been the day of their preseason finale, the New England Patriots held a game simulation walkthrough on Friday afternoon inside Gillette Stadium.

It was the first time during training camp the Patriots practiced on their game-day field. New England was scheduled to visit the New York Giants for its fourth exhibition game Friday night before the entire preseason was scrapped due to COVID-19 concerns.

“It’s all about mentally preparing ourselves when we’re out there on the practice field to get that game feeling that we had out there today,” third-year running back Sony Michel said.

The atmosphere mimicked what many NFL games might look like when the pandemic-altered regular season begins in less than two weeks.

No fans were present and only a handful of stadium employees and media members were scattered throughout the stadium. Music was blasted over the loudspeakers, and a recorded murmur of fans provided background noise.

“A little bit of crowd noise, some of the exchanges that we had — you know, going from first, second, third down to punt, to kickoff, different situations,” Michel said. “Kind of getting in that mood helps a lot.”

Players were divided into two groups, with offensive first-teamers wearing the Patriots’ home blue jerseys while offensive second- and third-stringers were in white. Defensive starters were split between the two.

The teams played to a 13-13 tie in the non-tackling, non-padded simulation that spanned three quarters — the first, second, and fourth — and lasted about 1 1-2 hours. Plays and downs were not always sequential as the team practiced different scenarios.

Cam Newton appears more firmly in the lead for the Patriots’ starting quarterback job after taking all of the snaps for the blue team. Jarrett Stidham and Brian Hoyer split reps for the white team.

Newton completed 18 of 21 passes, including a 30-yard strike to Mohamed Sanu to set up a potential winning field goal.

“Cam did a good job getting calls to us, making sure we could hear everything,” second-year wide receiver N’Keal Harry said. “It’s definitely different. It’s definitely not going to be like a regular game day without the fans.”

Rookie kicker Justin Rohrwasser, who was working with the blue team, missed a 49-yarder wide right as time expired. Rohrwasser was 2 of 4 on kicks, while veteran Nick Folk made 2 of 3 attempts for the white team.

Stidham took the first series of snaps for the white team, but went 0 for 4 and finished 9 of 13 for the day. Hoyer completed his first 12 passes before an incompletion to Gunner Olszewski on his final attempt during a fourth-quarter, two-minute drill.

“It was good just for us to be able to get out there and kind of simulate what it’s like to be in a game, especially for the rookies,” Harry said.

New England begins the season at home against Miami on Sept. 13, and hosts the Raiders on Sept. 27 after a visit to Seattle.

The Patriots had proposed filling Gillette Stadium to 20% of capacity in light of COVID-19 restrictions. However, Massachusetts Gov. Charlie Baker said in mid-August that no fans would be allowed to start the season.

Some teams plan to allow a limited number of fans into their stadiums based on varying state guidelines.

“All that’s out of our control,” Belichick said. “I mean, that’s all governed by local laws and ordinances and so forth. So, nothing we can do about that.”

NOTES: WR Will Hastings was released. ... LB Cassh Maluia, RB Lamar Miller and DL Chase Winovich did not practice. … OL Joe Thuney had his left hand wrapped after leaving practice Thursday with an injury. WR Jakobi Meyers also participated, but was wearing a red no-contact jersey. … CB Michael Jackson watched from the sideline after also being injured in Thursday’s practice.