Patriots look to add to home win streak against Ravens 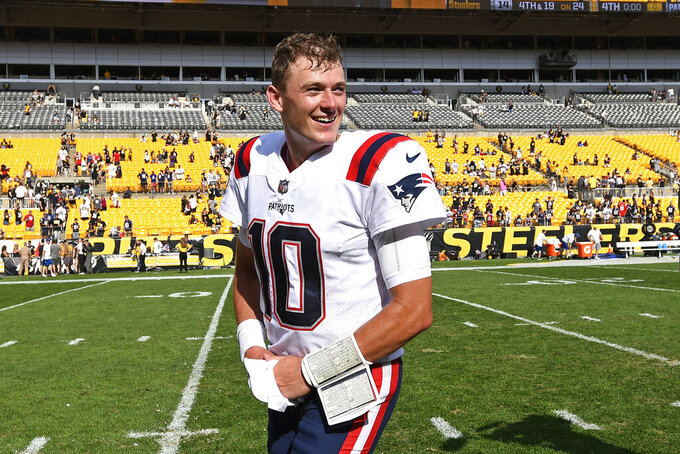 FOXBOROUGH, Mass. (AP) — Oh, what could have been.

It was April 2018 and the New England Patriots were fresh off a second straight trip to the Super Bowl. With Tom Brady on the roster, they didn’t enter that offseason explicitly looking for a quarterback.

But they were mindful that a successor would need to be lined up only months removed from Brady celebrating his 40th birthday.

It led them to bring in multiple players for visits leading up to the NFL draft that spring, including a speedy former Heisman Trophy winner who was trying to quiet growing whispers around the league that he might be better suited to play receiver at the next level.

“It was a great visit. Spent a lot of time with him. Really interesting guy,” Belichick recalled this week.

“I’ve seen Belichick smile,” Jackson said. “Usually, when I see him, he’s puzzled face, a straight-faced guy. When I saw him smile, I was like, ‘Damn, you’ve got humor.’ I told him that, and he was like, ‘Yeah.’

I’m like, ‘I wasn’t expecting you to be smiling.’”

It wasn’t enough for the Patriots to use one of the two first-round picks on him that year, though. Instead, New England wound up choosing offensive lineman Isaiah Wynn at No. 23 and running back Sony Michel at No. 31. Jackson fell all the way to the Baltimore Ravens at No. 32.

Four years later, Jackson will arrive in New England for Sunday’s matchup with the Patriots (1-1) on the third leg of what has suddenly become a “prove it” season for the former league MVP. It’s one in which he’ll either have the kind of year that nudges the Ravens (1-1) to make him the league’s highest paid quarterback or set the table for another team to possibly sign him away in free agency.

After watching him develop into a dual running and passing threat who continues to frustrate defenses, Belichick believes questions about Jackson’s NFL ceiling have been put to rest.

“Without a doubt,” Belichick said. “I think he’s more than answered it. We’ll see what his contract is, that’ll answer it.”

In last week’s win at Pittsburgh, the Patriots mixed in some run-pass option plays, which were a staple of the offense Jones ran at Alabama. He also said he has been given a lot more freedom to give his receivers more opportunities on deep “50-50” one-on-one opportunities. Jones had success last week, connecting with Nelson Agholor on a 44-yard touchdown;

“I think it’s great,” Jones said. “I think we want to give all of our playmakers a chance. A lot of our plays there’s a certain read on it. I do like the freedom to be able to do that. I did that a lot in the past.

“As long as I know the purpose, I have the green light to do what I’m supposed to do.”

The Ravens allowed Tua Tagovailoa to throw for 469 yards and six touchdowns against them last weekend, and Miami rallied from a 21-point fourth-quarter deficit to win 42-38.

“He operates the offense very well,” Ravens coach John Harbaugh said of the Patriots quarterback. “He’s very accurate, gets the ball out on time, he can move around in the pocket, he can scramble if he has to – I don’t think he wants to, but he’s willing to do it – and he makes some yards doing it when he does. A lot of respect, and he’s running that offense and doing a heck of a job.”

The Ravens certainly showed their explosiveness last weekend even in defeat. They became the first NFL team with touchdowns of 75 yards or more via the pass, the run and a kick return in one game.

Jackson had a great game both passing and running against the Dolphins. But with running back J.K. Dobbins still out because of last year’s knee injury, Baltimore hasn’t been great on the ground aside from Jackson’s own elusiveness.

Dobbins has been practicing. And if the running game improves, Baltimore could be very dangerous.